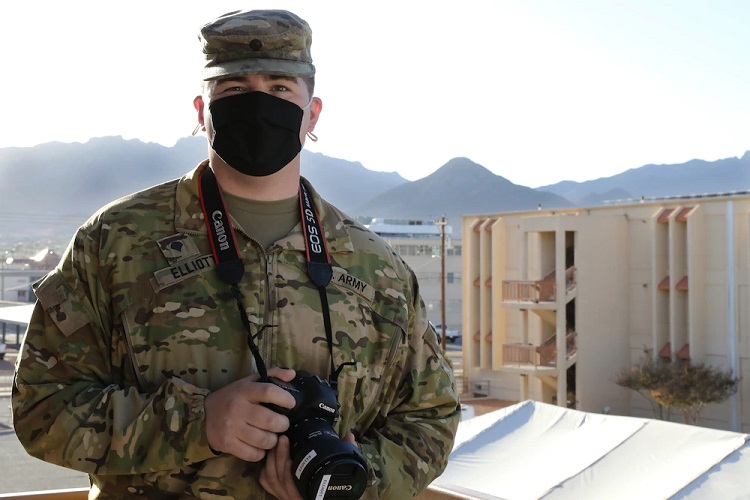 Spc. Max Elliott, a mass communications specialist with the 196th Mobile Public Affairs Detachment out of Columbus, Ohio, poses for a photo during mobilization April 7, 2021, at Ft. Bliss, Texas. Elliott will be deploying to U.S. European Command’s area of responsibility in support of the European Defense Initiative. | U.S. Army photo by Staff. Sgt. Jennifer Reynolds

“If you forget your roots, you’ve lost sight of everything.” – the late Walter Payton, Hall of Fame NFL running back.

Spc. Max Elliott grew up being a part of the high school football team and the National Honor Society while finding impactful ways to give back to his community.

Elliott, a mass communications specialist for the 196th Mobile Public Affairs Detachment out of Columbus, Ohio, and a Niles, Ohio, native, recalls his time as a lineman at Warren G. Harding High School, where he helped develop a flag football league as an after-school program. Motivated by his mother, a local teacher, and his football coach, Elliott started the league to help focus the talents of players throughout the local area who lacked the funds to play high school football.

The Warren Flag Football League started with four hundred players and has since grown to approximately seven hundred players, providing resources to teenagers who may not have had the opportunities to express themselves through sports.

As a member of the National Honor Society, Elliott also volunteered his time to work the soup kitchen at St. Vincent De Paul in Warren, Ohio.

“It was really one of the first times that the world was put in perspective for me, for how lucky I was,” Elliott said.

He volunteered up to three times a month at the soup kitchen during his junior and senior years of high school. Waking up early on Sunday mornings, preparing food, then serving others was an eye-opener to Elliott when he saw a fellow student on the receiving end.

“When you are put in a situation like that, and you can see the disparities in how people live; you really want to help people,” Elliott said.

This experience with selfless service caught Elliott’s attention and set him on a quest for more.

Sitting in English class his senior year of high school, Elliott recalls an Ohio Army National Guard recruiter as a guest speaker. Once looking into all the ONG had to offer, Elliott viewed it as an opportunity to serve others on a larger scale. After enlisting as a Public Affairs Broadcast Specialist in 2016 and attending the Defense Information School (DINFOS) at Ft. Meade, Md. Elliott then returned to Ohio to continue his service in uniform.

Now serving as Spc. Max Elliott with the 196th, he is part of a bigger team, playing out his role on a larger field. Elliott has served in Paraguay in 2017 to cover Fuerzas Comando, a multinational special operations forces competition, and Serbia in 2019 to cover Platinum Wolf, a multinational training exercise.

“Given the opportunity, Max can excel with any mission,” said Joel Gottke, a former staff sergeant with the 196th. “Proven in the field, once he focuses his mind on a story, he can really bring it to life.”

When the COVID-19 pandemic of 2020 kicked off, Elliott immediately answered the call to duty when his unit asked for volunteers to support the ONG’s relief efforts. Elliott traveled to ten locations throughout Ohio to document the ONG’s response, which involved its members working at local food banks. He was able to catch a glimpse of how the ONG takes care of local communities and how members of the communities contribute as well.

While on the mission, Elliott came across another person with a passion for service, Ms. Julie Hernandez, a local seamstress who handmade face masks for Soldiers and first responders at no cost. Elliott interviewed Ms. Hernandez and made a two-minute video that was shared on the ONG Facebook page and other social media platforms. Elliott’s video was later selected as the best social media video in the ONG. Like Ms. Hernandez, Elliott is using his talent to give back during times of need.

“Every day that I show up in uniform, I feel like I’m giving back in some small way, whether I’m activated for a crisis response or if I’m just going to drill, I know that my service means something,” he said.

Elliott deploys to Europe in April in support of the European Deterrence Initiative with his unit. He has not forgotten his roots, from serving his local community while in high school, to serving the state of Ohio as a Soldier. Next, he will be serving overseas on a much larger scale.

“My job specifically as a public affairs specialist, I’m able to make sure the jobs of my fellow Soldiers mean more, by telling their stories to the public,” Elliott said.