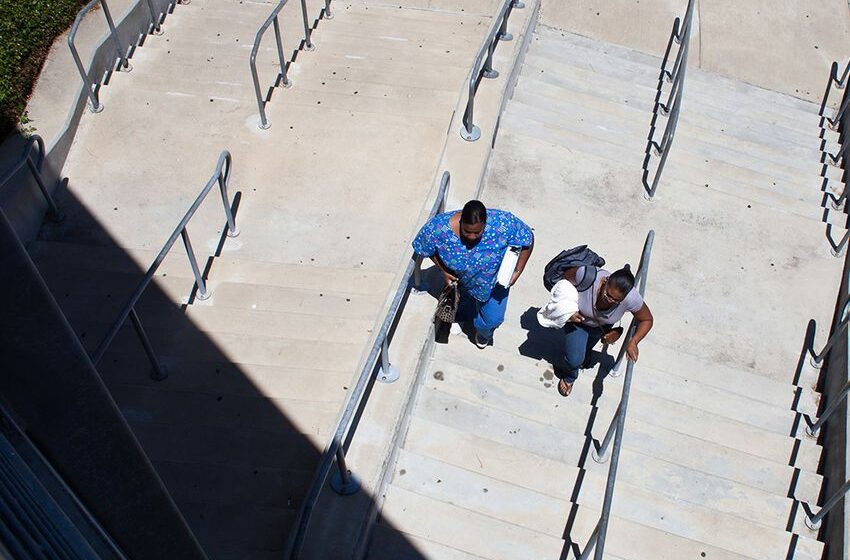 The community colleges that educate about half the state’s higher education students are warning of possible tuition hikes if the Texas Legislature enacts its sweeping property tax proposal.

The high-priority legislation would slow the growth of property tax revenue, which makes up an average 40 percent of community colleges’ funding, according to an association that represents them. The share for state appropriations for the schools, meanwhile, has plummeted from 66 percent in the 1980s to near 23 percent today.

“Community colleges are alarmed,” said Brenda Hellyer, chancellor of San Jacinto College. While she understands the need for property tax reform, she said “the concern is you’ve got two revenue sources — your state revenue source is pretty much capped. And now, if you put a very tight cap on your property taxes, what can you do other than increase tuition and fees or cut your services?”

Touted by Republican leaders as a needed check on spiraling property tax bills, the proposal would require taxing units to receive voter approval before raising property tax revenue 2.5 percent more than the previous year. It would apply to municipalities and special districts for hospitals and community colleges — and, depending on yet-to-be-filed legislation, to school districts, which levy the bulk of property taxes statewide. New developments don’t count toward the 2.5 percent cap.

Proponents say the package could give meaningful relief to taxpayers. They say it would make the property tax system more intelligible and transparent, and wouldn’t curtail districts’ ability to raise property tax revenue — just require them to receive voter approval first.

Critics say it could hinder municipal officials’ ability to provide public services or lower cities’ bond ratings. But, as currently drafted, it could have a more demonstrable impact on the state’s 50 community college districts, which together charge one of the lowest average tuition rates in the country.

Between 2013 and 2017, 47 of the 50 college districts — or 94 percent — saw their property tax revenue grow more than 2.5 percent in at least one year. According to data from the Texas Association of Community Colleges, which has taken a neutral position on the bill, 31 of those schools would have exceeded the trigger point in at least three of the five years, and 30 of them surpassed 2.5 percent revenue growth in 2017 alone.

The shifting burden of funding community colleges, from the state to local taxpayers, may explain the growth. Another factor: The number of Texans enrolled in community colleges has roughly doubled since 1990, and the sector is playing a key role in the state’s workforce development and educational attainment goals.

“We’re all doing everything we can around student success and meeting the needs of our community,” said Hellyer, who heads an institution that last year charged in-district students $750 a semester in tuition and fees. “We’ve really taken the position of wanting to sit down” with legislators and talk. “We appreciate what they’re trying to accomplish; we understand their concern, and we are really looking forward to working with them to find a solution that works.”

Under current law, voters can petition to roll back tax rates if revenue growth surpasses 8 percent, a threshold set in the 1980s when inflation was high.

tate Sen. Paul Bettencourt, a Houston Republican and champion of the latest reforms, said community colleges are generally “well thought of,” so could get voters’ approval to bust past the 2.5 percent trigger proposed in this year’s bills.

If college officials “had a good pitch, I think people would support them,” he said.

“You’re in a constant campaign mode”

The president of Brazosport College, Millicent Valek, has only once taken an issue to voters in her 23 years on the job.

Unlike four-year universities, community colleges don’t receive state money to build and maintain campus buildings. So Valek and her board — fiscal conservatives, she said — asked taxpayers in 2007 to approve a $70 million bond initiative to expand Brazosport’s campus facilities.

They won. But Valek remembers thinking: “I wouldn’t want to have to do this routinely.”

“You’re in a constant campaign mode,” said Valek, of the run-up to the referendum. “I completely abandoned everything else to do it for a portion, a quarter, of the year. I was thinking if you do that regularly, one, you would have to hire additional staff just to manage the process, and it would be so easy to lose your focus.”

Valek said she raised money from donors for the effort, including those who typically help pay for student scholarships. She also said she wants to work with legislators to find a solution on property tax reform “that serves everyone.”

Dustin Meador, a director at the Texas Association of Community Colleges, said for small taxing units — Clarendon College’s, for example — “you’re talking about going to the voters any time you have to hire a new provost.”

“We’re confident we’d win on the merits, but it’s a bit burdensome,” he said.

Bettencourt said the reform legislation, which he authored, would move elections to the same time, lessening the costs and difficulty of reaching voters. The argument was echoed in hearings about the legislation, which has passed out of a Senate committee.

At one February meeting, state Sen. Juan “Chuy” Hinojosa, a McAllen Democrat, expressed trepidation that the bill would tie the hands of jurisdictions — like schools and community colleges, “a big engine that drives our economy,” he said. His colleagues on the committee, all Republicans, said the legislation would shift a share of education funding back onto the state, and that the 2.5 percent threshold was an overdue correction to lower inflation rates.

They did not discuss at length the impact on community colleges. But when similar legislation was pushed in 2017 with a higher trigger point, of 6 percent, the lower chamber’s Ways and Means Committee carved out an exemption for the institutions.

The Texas Association of Community Colleges hopes a similar solution can be reached this session, with the former chair of the Ways and Means Committee, state Rep. Dennis Bonnen, R-Angleton, now speaker of the Texas House.

“State funding is out of our control,” said Jacob Fraire, head of the association. The Legislature has earmarked more money for community colleges this session. But were the property tax proposal to pass, Fraire said the sector sees few options beyond increasing tuition or cutting services — which might put popular items like “dual credit” courses or campus safety initiatives on the chopping block.

Tuition, he said, is the “only one of the three revenue sources where we have some control.”

If an election trigger is tied to property tax revenue growth, “we must conclude that tuition and fees might be an avenue that our colleges may have to draw upon — not willingly — but may have to,” he said.

Brandon Formby contributed to this report.

Disclosure: San Jacinto College and the Texas Association of Community Colleges has been a financial supporter of The Texas Tribune, a nonprofit, nonpartisan news organization that is funded in part by donations from members, foundations and corporate sponsors. Financial supporters play no role in the Tribune’s journalism. Find a complete list of them here.