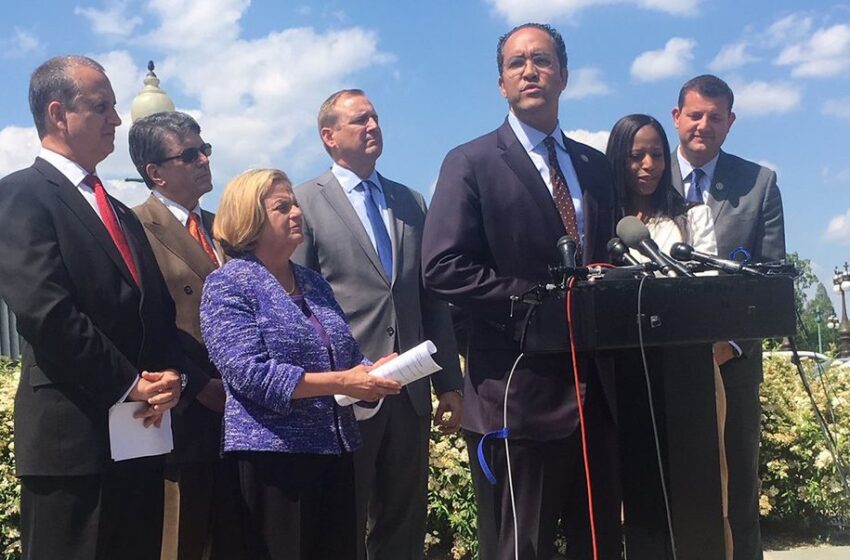 WASHINGTON — Fed up with a long stretch of inaction on immigration in the U.S. House, U.S. Rep. Will Hurd, R-Helotes, and some of his Republican colleagues declared Wednesday that they’ll try to force the House to vote on a series of bills addressing the status of undocumented immigrants brought into the country while they were children, among other immigration measures.

Hurd, along with a small group of other moderate Republicans, introduced what’s known as a discharge petition Wednesday that would effectively force Speaker Paul Ryan to bring four immigration bills to the House floor for a vote as early as June. GOP leadership has previously declined to do so.

If the measure is signed by a majority of House members, the legislation can bypass the committee process that is required for most bills.

At a news conference Wednesday, Hurd said it’s urgent for the House to address the concerns of millions of young undocumented people in the U.S. In 2012, President Barack Obama implemented a policy known as Deferred Action for Childhood Arrivals that protects from deportation some undocumented immigrants brought here as children. But President Donald Trump has tried to dismantle the program, saying it should be up to Congress to act on the issue.

At least 25 Republicans, along with the entire House Democratic delegation, must sign on to the measure to reach the necessary 218 votes. Fifteen House Republicans — including U.S. Rep Charlie Dent, R-Pennsylvania, whose tenure ends this week — have already done just that.

“We feel very good today,” said U.S. Rep. Carlos Curbelo, R-Florida. “I think [the 15 signatures] exceeds all of our expectations, so we think we’re on our way.”

The petition takes advantage of a little-known provision known as the “queen of the hill” rule, which allows a series of bills to compete with one another. The bill that collects the biggest majority of votes is the one that passes.

In this case, Hurd and his colleagues want to bring four bills to the floor, including “The U.S.A. Act” co-authored by Hurd and U.S. Rep. Pete Aguilar, D-California. Hurd’s plan provides protection for DACA beneficiaries and beefs up border security measures.

The other bills up for debate under the “queen of the hill” plan include a conservative measure authored by Rep. Bob Goodlatte, R-Virginia, and the DREAM Act of 2017, the favored plan of House Democrats. Goodlatte’s bill offers temporary status to DACA recipients alongside increased border security and deep cuts to legal immigration, while the DREAM Act offers a path to citizenship for DACA recipients and other young undocumented immigrants without increased immigration enforcement measures. Ryan would decide the fourth bill up for debate.

House Republican leadership, including Majority Leader Kevin McCarthy, R-California, have already expressed displeasure with the discharge petition. The reaction was not surprising to the members behind the measure.

But Curbelo said the petition is “deferential” to leadership because it gives Ryan an opportunity to craft his own legislative solution.

“Leadership, no matter the party, is never going to support a discharge petition,” Curbelo said. “We truly believe that this process actually empowers them because it allows every member to have a role in the immigration debate.”

Republicans supporting the measure stressed that the petition is not an endorsement of any one immigration bill, but of bringing those bills to the floor for debate. Hurd said that this is the House’s chance to act.

“No matter what your ideological views on this topic are, everybody should have a debate,” Hurd said. “I’m glad that there are an intrepid few that are willing to take this step to force this broader conversation.”

Hurd on the Hill: A Missing Smithsonian...