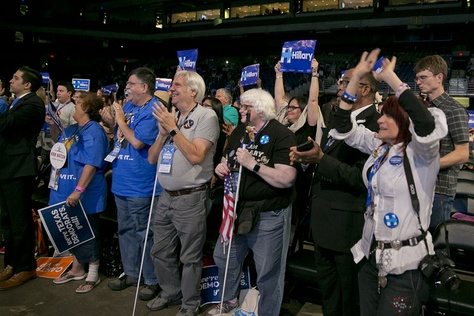 After a tumultuous Republican National Convention, Texas Democrats are heading to Philadelphia anticipating relative unity — relative being the key word — as they formally nominate Hillary Clinton for president.

There are still some raw emotions among supporters of Bernie Sanders, and those feelings were heightened recently as leaked emails revealed that the Democratic National Committee was less than neutral in the nominating process. The turmoil was compounded Sunday evening, when DNC Chairwoman Debbie Wasserman Schultzannounced she would resign at the end of the week.

On the whole, however, Texas Democrats are not expecting anything like what happened in Cleveland, where Republican National Convention events showed disunity over the party’s presidential nominee, Donald Trump. Those events included a controversial speech by U.S. Sen. Ted Cruz of Texas, who pointedly declined to offer any support for Trump, his former bitter rival in the race for the White House.

Clinton, the former secretary of state, easily won the March 1 primary in Texas, meaning the overwhelmingly majority of Texas delegates are aligned with her. Just about every elected official from the state who is attending the convention is a Clinton supporter.

That is not to say Democrats will not be faced with their own questions about unity in Philadelphia. The thousands of leaked emails, which came out Friday, show DNC staffers favoring Clinton over Sanders throughout the primaries, confirming Sanders supporters’ suspicions that the national party was working against them.

“When people find out something like this, it really undermines the integrity of the Democratic Party as a whole,” said Jacob Limon, who served as Sanders’ Texas state director. “When you see something like that, it just undermines the voters’ beliefs, and it gives fuel to the Bernie folks who’ve said, ‘We’ve been getting a raw deal ever since.’ It really adds to that narrative.”

Limon was among the Sanders backers from Texas working in recent days on the Rules Committee to change the nominating process after a primary season in which they viewed the system as rigged against their candidates. The Sanders and Clinton campaigns reached an agreement Saturday to set up a “unity commission” that could recommend, among other things, reducing the role of superdelegates. Critics say the process is undemocratic.

Some talk of the Texas delegation will undoubtedly center on the Castro brothers, long regarded as rising stars in Democratic politics. U.S. Rep. Joaquin Castro, D-San Antonio, is scheduled to address the full convention. Both he and his brother, U.S. Housing SecretaryJulián Castro, are set to speak at daily breakfasts with Texas delegates. Also slated to speak at the Democratic National Convention is U.S. Rep. Sheila Jackson Lee of Houston.

Julián Castro, the former mayor of San Antonio, was considered by Clinton to be her running mate, though she ultimately settled on U.S. Sen. Tim Kaine of Virginia. Texas Democrats greeted the decision with disappointment but offered warm words for Kaine, citing in particular the attention he paid to Texas while DNC chair from 2009-11.

“We wanted to see a Hispanic on the ticket because we thought he was going to engage and turn out Hispanics like we never have before,” Texas Democratic Party Chairman Gilberto Hinojosa said, nonetheless praising Kaine’s connection with Latinos in America. “He understands the Hispanic community, and he understands how important it is to engage that community.”

The Castros were again part of the national political conversation Sunday as potential candidates to permanently succeed Wasserman Schultz. DNC Vice Chairwoman Donna Brazile has been tapped to serve as interim chairwoman.

“In our humble opinion, Texas Democrats believe that both Julián and Joaquin Castro have what it takes to pick up the reins and move the party forward,” Hinojosa said in a statement. “It would be remarkable to have the first Hispanic Chair of the Democratic National Committee.”

While there has not been as much attention paid to Democrats skipping Philadelphia as there was to Republicans passing on Cleveland, at least one prominent Texas Democrat is staying home: Pete Gallego. The former U.S. representative from Alpine is running to take his seat back from Will Hurd, a San Antonio Republican who is branding Gallego as a rubber stamp for Clinton, in one of the most closely watched races across the country.