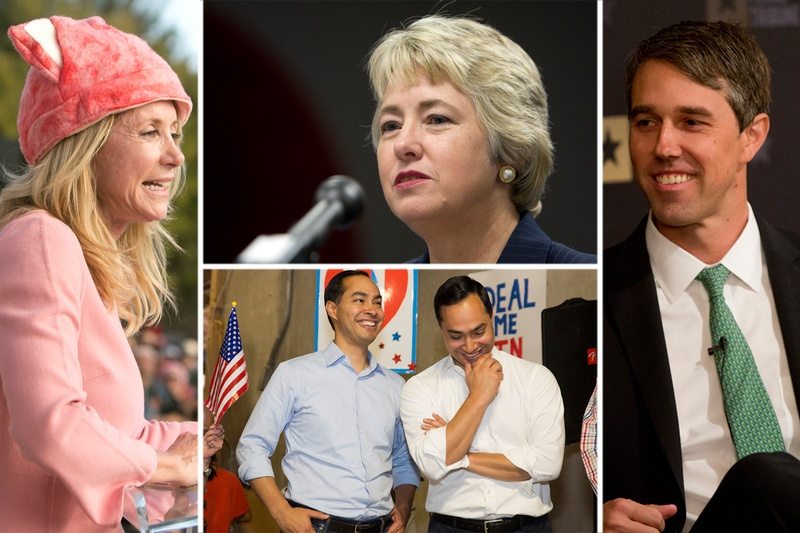 In late January, a high-profile forum for candidates vying to be the next Democratic National Committee chair brought hordes of Democrats to Houston ready to plot the party’s national future. But for Texans in the party, the more consequential meeting may have occurred the day before in Austin.

A tight-knit group of Texas Democratic leaders traveled to the state capital that day to begin preliminary conversations about the 2018 midterm races.

Their main agenda: mapping out a strategy for the 2018 midterm elections.

The expectations in the room were not soaring but were cautiously hopeful. That optimism was mostly rooted around one person: President Donald Trump.

“I think 2018 will be the most favorable environment Texas Democrats have had in a midterm election in well over a decade,” said Turner, who declined to comment on the meeting. “I think when you look at the actions of the Trump administration just three weeks in, you’re seeing a president with historically low approval ratings in what should be a honeymoon period, and no indication that’s going to change given his divisive actions.”

Trump’s presidency brings together a confluence of several factors that Democrats hope will get candidates over the line: a stronger-than-past Texas Democratic performance last November in urban centers, the traditional backlash against a sitting president in the midterms and an increasingly expected added drag that Trump will create for Republicans.

The Democratic calculation is that in this unpredictable and angry climate, a full 2018 slate could produce a surprising win or two statewide or down-ballot.

At the Jan. 27 gathering in Austin, attendees strategized how to make inroads in the state at any level, from municipal races up to the ultimate prize, taking down U.S. Sen. Ted Cruz, who will be up for re-election for the first time next year.

That meeting roster largely reflects a new generation of Texas Democrats who only know life as part of a minority party that often functions as an afterthought in state politics. A Democrat has not won statewide office in Texas since 1994.

Despite attendees’ omerta-esque unwillingness to comment on the meeting, what can be gleaned is that the powwow pulled together politicians from disparate regions who, in at least one case, only a few months ago had not even heard of some of the people in the room.

Sources say no decisions were made on whom should run in which slot, nor was that widely discussed. Instead, the emphasis was on ensuring that state leaders would work together to present the strongest slate possible.

And also unlike past cycles, the Democratic planning this term centers on the political climate, rather than on a singularly compelling personality running for governor.

That the meeting happened at the outset of the state’s legislative session was also no coincidence. Democrats sense an opportunity to win over some of the business community, particularly as the “bathroom bill” touted by Republican Lt. Gov. Dan Patrick continues to percolate at the state Capitol and as immigration, and particularly Trump’s proposals for a border wall and Mexican tariffs, roil national politics.

Parker did emphasize to the Tribune that the conversations about 2018 are happening throughout the state.

“It’s never going to be about what a small group of people said or do in a room,” she said. “It’s about what the people of Texas tell us what they need. Many of us have committed to going out and having those conversations.”

The nascent battle plan is to charge the hill.

The assumption is that only a few candidates will break through and lay the foundation for the future. But candidates need to be in place to help the collective whole, the thinking goes.

Some Democratic insiders pointed to the 1990 election, which, at first blush, was just another year of Texas Democrats continuing their ancestral dominance of the state’s politics.

In that vein, the gubernatorial race is unlikely to take center stage.

Since the Jan. 27 meeting, Julian Castro, the most-speculated Democratic contender to take on Gov. Greg Abbott, has made clear he is unlikely to run statewide in 2018. He all but closed the door on that possibility in an early morning tweet Thursday.

Instead, the most frequently floated gubernatorial candidate is Collier, a 2014 state comptroller candidate. Collier is relatively unknown statewide but impressed several Democrats in that previous run. He has also been suggested as a possible contender to run for lieutenant governor.

It’s the U.S. Senate race that is quickly becoming the center of the Democratic world, in part because of the incumbent, Cruz, and because of the two Democratic up-and-comers mulling runs: O’Rourke and Joaquin Castro.

Both men are in the same 2012 congressional class and are considered friendly with each other.

Democrats in the state and in Congress are closely watching how the two men maneuver around a possible primary race against each other, but the betting money is that O’Rourke is more likely to follow through with a run.

”I think you’ll see with a lot of the troubles that Ken Paxton and Sid Miller have found themselves in over the last couple years, I think you’re going to see considerable interest in those seats as well,” Turner said.

But no Democratic challengers emerged among these interviews.

Todd Smith, Miller’s political consultant, told the Tribune that the Miller campaign “had no concern about a Democratic opponent in the general election.”

“We feel very confident about where we are in a re-election planning and our position in strength in the race, and we welcome all comers: Republican, Democratic and independent, and we have a great story to tell and look forward to telling the people of Texas that story,” Smith said.

Democrats did not spend money in either Culberson’s or Sessions’ districts in recent cycles, but presidential nominee Hillary Clinton’s performance there in 2016 encouraged the party to take a second look. Dallas school board member Miguel Solis recently told the Tribune he was considering a challenge to Sessions.

One prominent Texas Democrat who is not outwardly entertaining a 2018 run is Davis, as observers detect little interest from her. However, she is very much in the strategic mix, with sources saying she is positioning herself as a font of advice after her brutal 2014 gubernatorial run.

To be sure, there is nothing new about this planning.

Back in July, when most Democrats assumed Hillary Clinton would win the presidency, Texans at the Democratic National Convention in Philadelphia offhandedly floated the notion that a Trump presidency would present a morbid opportunity for Texas Democrats to do well amid a 2018 backlash.

But now a Trump administration is a reality and thousands of Democrats are marching in the streets across the state. And more than once, in conversations with the Tribune, Democrats noted that the Trump-Clinton margin in Texas in November – 9 percentage points – was nearly as narrow as that of perennial battleground Ohio.

And yet, there’s a clear-eyed understanding of just how difficult any of this will be.

Any Democratic candidate is likely to begin a statewide race with a double-digit deficit to a Republican incumbent. The Congressional and state legislative maps were drawn years ago stacked in favor of the GOP with few competitive seats.

The way to narrow those gaps is typically to swamp voters with television advertising, which in Texas is prohibitively expensive.

Fundraising remains a constant struggle for state Democrats, and there will be no shortage of Republican money. Abbott alone recently reported a $34.4 million war chest. And while Cruz had an unsteady landing after his presidential campaign, he was a money magnet as a candidate.

And there is little optimism that the national Democratic campaign arms for gubernatorial and U.S. Senate races will be inclined to invest in the state.

In effect, these Texas Democrats assume they are on their own.

Republican pollster Chris Perkins said there is some semblance of logic to the Democratic mindset but remains dubious that the opposition will make an effective case to voters.

“I can see the Democrats’ argument for optimism, based on national historical trends — but this is Texas,” he said. “We’re a conservative state and the Democrats’ most recent rhetoric suggests that they will once again run hard to the left and alienate independent-leaning voters.”

Still, Parker, the former Houston mayor, told the Tribune she sees more value to this cycle than just wins and losses.

“I’m really excited as I interact with Democrats around the state, how many young electeds are ready to move up in the leadership,” she said. “There’s a lot of young Turks out there who are planning their future.”

Beto O’Rourke is still campaigning. But for...