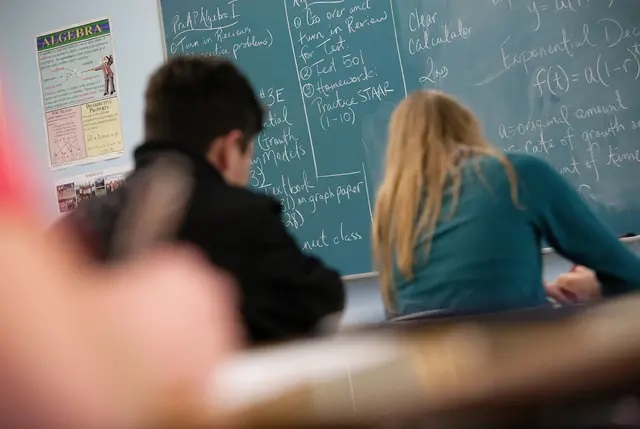 Students in class at Bowie High School in Austin. The Texas Legislature could pass a bill that restricts how teachers can discuss current events in the classroom and teach about America’s historical treatment of people of color. Credit: Tamir Kalifa for The Texas Tribune

Dallas Independent School District teacher Jocelyn Foshay was guiding a social studies lesson with her middle school class about the amendment that protects Americans from unreasonable search and seizure.

“Where was the Fourth Amendment to protect Breonna Taylor?” a student asked her, referring to a Black woman who was shot and killed in her apartment by Louisville police officers during a botched raid in 2020.

Foshay turned the question back to her students. “What do you think?” she asked, allowing students to process their thoughts and draw their own conclusions.

These are the kinds of conversations and questions that teachers say are typical of students, especially in the past year as the news cycle has exploded with stories about race relations, injustice and inequity. These sorts of conversations about current events often can be teachable moments and exercises for critical thinking for young minds, educators say.

But Texas educators say they’re concerned they won’t be able to have these types of open, far-reaching conversations, often prompted by inquisitive students, if the Texas Legislature approves a bill that restricts how teachers can discuss current events in the classroom and teach about America’s historical treatment of people of color.

House Bill 3979, which mirrors legislation making its way through state legislatures across the country, has been coined the “critical race theory bill,” though neither the House nor Senate versions explicitly mention the academic discipline, which studies the ways race and racism have impacted America’s legal and social systems.

Supporters of the bill argue they are trying to combat personal biases bleeding into public education.

“We want to do our part to preserve the system and yes to talk about our history, warts and all,” said state Sen. Bryan Hughes, R-Mineola, on the Senate floor Friday. “But present it truly and accurately, especially those founding principles, which have made Americans so special.”

A new version of the bill, which was substituted on the Senate floor late Friday night and approved, says teachers can’t be compelled to discuss current events and if they do, they must explore it from multiple positions without giving “deference to any one perspective.” The bill also has already passed out of the House.

It bars students from getting course credit for civic engagement efforts, including lobbying for legislation or other types of political activism. It also added a civics training for teachers to be developed by the state and a list of founding documents students must be required to be taught.

The Texas Education Agency estimates that the new training program will cost $15 million annually starting in 2023.

Teachers say the language of the bill is often vague and it’s unclear to them how the bill will directly impact or change their lessons. But the fear of being at odds with the law alone could create a chilling effect, they said.

“Part of his bill that kind of makes me freeze up is like feeling like I can’t talk about race or feeling like I’m going to say something that’s out of my lane, out of my professionalism as a teacher,” Foshay said. “If kids aren’t able to make those connections [about] why this [lesson] matters to them here sitting in the classroom right now … we’re really losing a piece of making school matter to kids.”

Supporters of the legislation say they have concerns teachers are unfairly blaming white people for historical wrongs and distorting the founding fathers’ accomplishments. In recent years, there have been calls for more transparency about historical figures’ racist beliefs or connections to slavery.

“Do you want our Texas kids to be taught that the system of government in Texas, in the United States, is nothing but a cover-up for white supremacy?” asked state Rep. Steve Toth ,as he laid out HB 3979, which he sponsored, on the House floor in early May. “Do you want them to be taught a souped-up version of Marxism?”

Toth, R-Spring, told The Texas Tribune he is still having discussions about whether he will accept the new Senate’s changs and send the bill straight to the governor to sign, or reject the amended legislation and request a conference committee made up of members from both chambers to resolve differences.

The fight to ban critical race theory discussions from schools has increasingly become a rallying cry among conservatives as America has grappled with racial injustice and inequities over the past year. The movement was encouraged by former President Donald Trump, who directed the federal government in 2020 to stop diversity and inclusion trainings that support similar sentiments, calling them “propaganda.”

Recently, 20 state attorneys general sent a letter to the U.S. Education Secretary Miguel Cardona and expressed concern with critical race theory. The letter writers, including Texas Attorney General Ken Paxton, specifically mention the 1619 Project, a reporting endeavor from The New York Times that examines U.S. history from the date when enslaved people first arrived on American soil, marking that as the country’s foundational date. The Texas legislation would specifically prohibit schools from teaching the 1619 Project.

“To suggest that America is so racist at its core and it’s so irredeemable and they can never overcome biases and treat each other fairly — that’s a real problem,” Hughes said of the project.

“There is this misunderstanding that the past is walled off from the present by the bill’s authors,” said Trinidad Gonzales, a history professor and assistant chair of the dual enrollment program at South Texas College. “It is the opposite: The present and past are interconnected. That is history. The bill’s authors are obviously not historians.”

After the Jan. 6 insurrection at the U.S. Capitol, Foshay said her school had a schoolwide discussion and showed the students news clips, making sure to present the event as it happened, without bias. But she worries the bill would force her to equivocate and not give students a straight answer.

“It’s going to feel like I’m grasping at straws to present two sides of something,” she said.

On Friday, Hughes tried to reassure Democrats against the bill that it would not require teachers give moral equivalency to perpetrators of horrific violence.

“If we’re not allowing teachers the opportunity to have these honest and intellectually appropriate conversations with their feelings about the past, then we’re basically silencing those communities,” Patterson said. “We’re saying, ‘not only are we ashamed of your heritage and your culture, but we’re not even at liberty to discuss it.’ And it just goes back to whitewashing history.”

Juan Carmona, a history teacher in the Rio Grande Valley town of Donna, said he thinks this kind of legislation is in direct response to the broadening of voices and perspectives examined in the classroom as the student populations also become more diverse.

“We have seen more student involvement because they can now see their own voices, their own people, their own culture being in history,” Carmona said. “They never saw themselves, so they weren’t engaged.”

School Board of Education member Pat Hardy, who used to teach social studies, said the goal of the bill isn’t to “Pollyanna” or “make it only the positives,” but she speculated that it is a response to instances in school districts across the state where parents feel “biases are being taught.” Hardy would not name specific school districts where there were issues.

“We need to really stress what a unique country we have,” she said. “You think about so many kids coming here as immigrants … and they don’t know from their parents about American history, love of country and all that necessarily. And so we really feel like that’s an area that needs to be delved into.”

Educators also worry Texas students will be at a disadvantage when taking Advanced Placement or dual enrollment classes in high school if they don’t receive thorough lessons about how race and gender have shaped American society.

Mallory Lineberger, a former history teacher who now serves as a policy fellow for the advocacy group The Education Trust in Texas, says AP history students are often scored on how well they can connect historical events and modern issues.

“If we can’t talk about contemporary issues or current events, how are they supposed to be able to have a thorough and critical analysis of how a topic has changed over time?” she said.

In a letter to Lt. Gov. Dan Patrick and the Texas Senate, the American Historical Association also cautioned that this legislation would limit student access to college courses.

“The uncertainty of how [the legislation] will be implemented and the likely loss of offerings for dual-enrollment and AP History courses could hurt Texas’s progress toward increasing its college-educated population,” Jacqueline Jones, association president, said in the letter. “Last year 12 percent of all college students in Texas were dual-enrollment students. History is the most offered course in dual enrollment.”

More than 220 Texas historians and teachers across the state have signed a separate letter opposing the bill and sharing similar concerns.

Lineberger also identified around 190 current Texas Essential Knowledge and Skills, the state approved and required education standards, that she said directly conflict with the bill.

For instance, middle schoolers are expected to “analyze the historical background of various contemporary societies to evaluate relationships between past conflicts and current conditions.”

Teachers are also concerned students will be less likely to learn how to participate in the political and civic process if they are not able to assign those kinds of activities or award extra credit. Foshay in Dallas ISD says district leaders have put a large emphasis on an initiative called project-based learning in which students learn by trying to solve real-world problems, which she said can include internships or civic work in the community.

Bill supporters said the legislation would not prevent students from being able to participate in the political process, lobby lawmakers or attend rallies, but it would prevent teachers from requiring students participate in those events for credit or extra credit. The most recent version of HB 3979 approved by the Senate does clarify students can participate in community charitable projects, but Foshay worries it will mean fewer students become engaged in their broader communities.

“Part of me wants to say kids will do this work whether or not they get a grade on it,” she said. “But I don’t entirely believe that … because I do think schools really do help them facilitate projects they do.”

Disclosure: Education Trust and New York Times have been financial supporters of The Texas Tribune, a nonprofit, nonpartisan news organization that is funded in part by donations from members, foundations and corporate sponsors. Financial supporters play no role in the Tribune’s journalism. Find a complete list of them here.