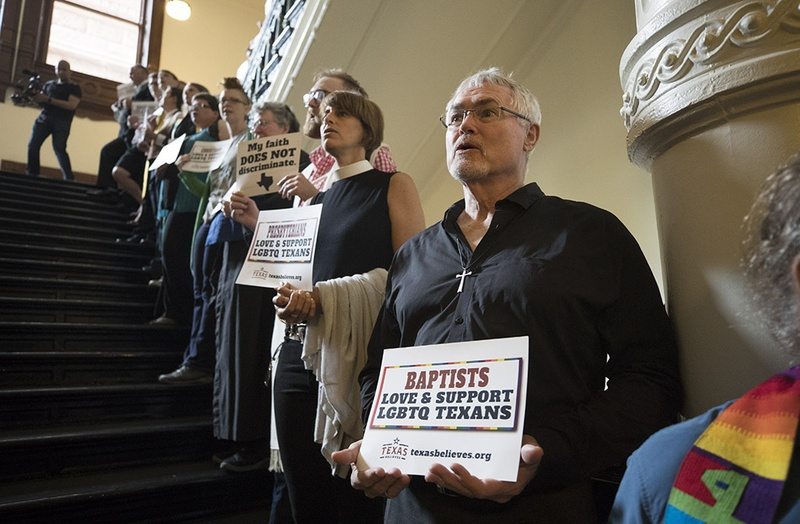 A group of faith leaders gathered outside the House chamber on Wednesday to protest legislation they see as discriminatory toward LGBT Texans.

Prayer is a staple of the Texas Capitol, where lawmakers begin each legislative day with an invocation and bowed heads.

But on Wednesday, about 50 faith leaders of various denominations lined the stairs outside the Texas House in protest. Their prayer was silent, but their message was clear: don’t legislate against LGBT Texans in our name.

Singing hymns and holding placards that read “My faith does not discriminate,” the group planned to deliver to lawmakers’ offices a letter signed by more than 200 faith leaders in Texas who oppose various proposals they see as discriminatory against LGBT people. Among those measures are two proposals that would regulate bathroom access for transgender Texans — Senate Bill 6 and House Bill 2899 — that are priority for some Republicans but haven’t progressed in the waning weeks of the legislative session.

“Often the voices of people from faith communities that are heard are voices of judgment and condemnation,”said Rev. Karen Thompson of the Metropolitan Community Church of Austin, whose congregation is mostly made up by LGBT members. “We’re here to say that there is another voice of the faith community that is welcome and encouraged.”

Wednesday’s protest further marked the divide among the faith community when it comes to the bathroom legislation.The message brought by those who congregated outside the House chamber strayed from that of pastors and other church leaders who for months have advocated for legislation to regulate bathrooms, citing concerns for the privacy and safety of women.

Lt. Gov. Dan Patrick — who has championed the Senate’s proposal — had also said he would galvanize 1 million Texas Christians in support of the bill.

Senate Bill 6 would regulate bathroom use in government buildings, public schools and universities based on “biological sex,” keeping transgender Texans from using bathrooms that match their gender identity. It would also prohibit local governments from adopting or enforcing local bathroom regulations.

House Bill 2899 would ban political subdivisions, including school districts, from enacting or enforcing policies to protect a class of persons if they aren’t already protected by federal or state law as applied to bathrooms, showers or changing facilities.

That would nullify parts of nondiscrimination ordinances in several Texas cities that have been in place for decades to protect certain classes of people, including transgender residents, from discrimination in public accommodations, like the public bathrooms that match their gender identity.

The Senate bill was passed by the upper chamber in March but has languished in the House, where Speaker Joe Straus — who opposes the legislation — did not refer it to committee for consideration. Instead, a panel of House lawmakers considered HB 2899 but they have yet to vote on the measure since an April 20 hearing.

Since then, half of the Republicans in the House have signed on as co-authors. But it’s unclear whether the proposal will make it out of committee.

The faith leaders’ protest came on the same day a House committee is set to consider legislation that would allow county clerks to recuse themselves from signing marriage licenses for same-sex couples because of religious objections. The Senate signed off on a similar proposal last month.