Throughout her short time in office, U.S. Rep. Veronica Escobar has become a vocal critic of President Donald Trump. REUTERS

WASHINGTON — A freshman representative and one of the first Latinas elected to Congress from Texas, Veronica Escobar said she was incredulous when she was tapped by Democratic leadership to deliver a State of the Union response in Spanish on Tuesday evening.

“It is incredible,” the El Paso Democrat said in a phone interview Monday. “In some respects, I can’t believe it’s even happening and that I’m fortunate enough to be able to do this.”

The location is intentional. She called it “a powerful symbol for the work we are doing as Democrats to try to help people, versus what the president and his party are doing to literally attack community health centers and American’s health care.”

Health care is a theme she plans on hitting in her response to the president.

“I hear over and over and over again,” Escobar said, “that since the president came into office, the skyrocketing costs of health care are burying them financially.”

She also plans on touting the work Democrats are doing in Congress, and she hopes to touch on economy, immigration and climate change, time permitting.

Escobar will be giving one of two Democratic responses to President Donald Trump’s State of the Union. The other response, which will precede Escobar’s, will be delivered in English by Michigan Gov. Gretchen Whitmer.

Typically, party leadership taps people perceived to be rising political stars to deliver responses to the State of the Union.

Pelosi cited Escobar’s work “to end the gun violence epidemic and to protect children and families at the Southwest border.”

Texas Democratic Party Chair Gilberto Hinojosa referred to the choice of Escobar as “inspiration to Texans everywhere because she has demonstrated an unwavering commitment to fight for what’s right” and “applaud[ed] Speaker Pelosi and Leader Schumer’s decision to elevate her critically important voice and entrust her with this important address.”

This year, the State of the Union, which will air at 8 p.m. Central Time, comes at an uncomfortable point for Trump, as the Senate’s presidential impeachment trial comes to an end.

Escobar said she also expects to address the impeachment in her speech.

“Impeachment definitely is top of mind,” she said, “but there are day-to-day kitchen table issues that Americans face that the Democrats in Congress have been working on tirelessly.”

Throughout her short time in office, Escobar has become a vocal critic of Trump.

“We have a president who uses words to divide us and uses fear to divide us,” she said Monday, adding that she expects hyperbole from the president’s State of the Union address, “so it’s very critical that the American people understand the truth about our challenges, as well as the truth about what’s being done to confront them.”

Escobar and Sylvia Garcia, D-Houston, were elected in 2018, becoming the first two Latinas ever to represent Texas in Congress. In another elevation, Pelosi tapped Garcia to serve as an impeachment manager, presenting the case against Trump in the Senate trial.

The 16th Congressional District is the farthest west in Texas, sitting right across the border from Ciudad Juárez, with a population that is more than 80% Hispanic.

As of Monday morning, Escobar said she was still putting the final touches on her speech. She had delivered a dry run of it the night before and had run over her 10-minute time allotment by about five minutes.

“It is an extraordinary opportunity, and I am very humbled by it and I understand the gravity of the moment,” Escobar said.

She said she’s still nervous about “making sure everything goes off without a hitch” and about a cough she has.

Tags: state of the union

Partisan tension hung over State of the... 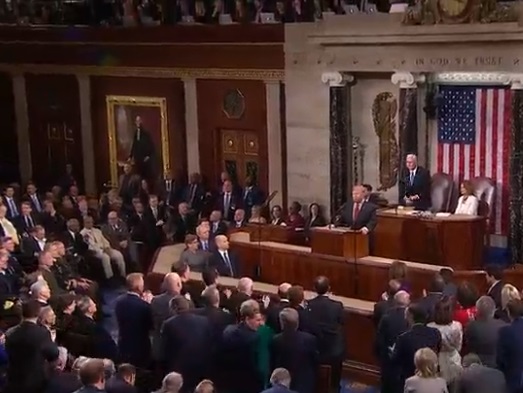 Op-Ed: A Dispatch from the Most Dangerous...