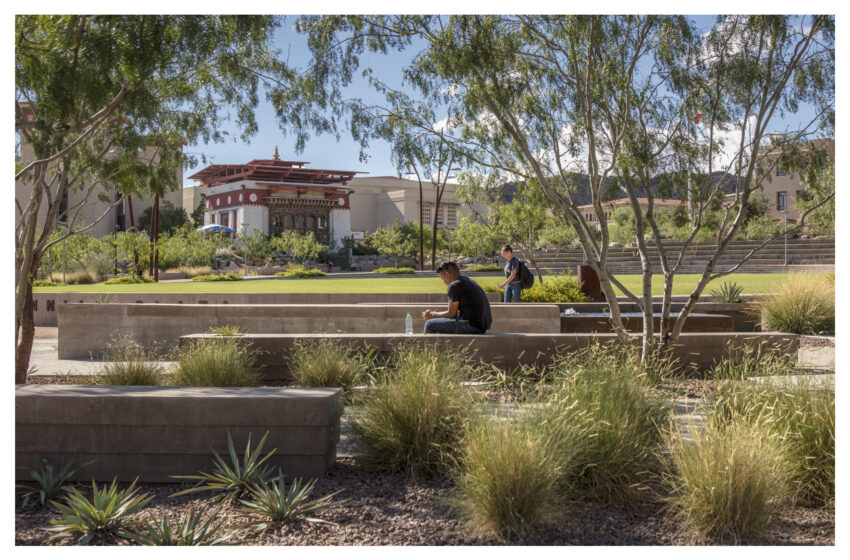 The American Society of Landscape Architects Texas Chapter recognized The University of Texas at El Paso’s Campus Transformation Project with its Award of Excellence in Design during the group’s annual conference in Austin, Texas.

Christine Ten Eyck, the landscape architect who led the UTEP design team, accepted the award, which was the only one presented in that category this year.

Ten Eyck has called UTEP’s Campus Transformation Project (CTP) the highlight of her 20-plus-year professional career. She is proud of the end result, which created a new heart for the UTEP campus that embraces facets of the Chihuahuan Desert and promotes sustainability through the design, water conduits and selection of plant life.

“Any time you go through a difficult journey to build something with a large team of people and finally get to see it finished and growing and attracting people to spend time there – that is the best,” Ten Eyck said. “It makes it all worth it.”

The Texas judges strongly suggested that UTEP nominate its CTP to the ASLA national competition in the general design category. Those winners will be announced during the group’s annual meeting in October in Los Angeles, California.

The CTP has earned several state, national and international awards since it opened in April 2015. They include the 2016 U.S. Green Building SITES Silver Certification, which made it the first sustainable site certified project in the world.

The award for outstanding achievement in landscape architecture was presented during the organization’s Awards Luncheon on April 26, 2017.