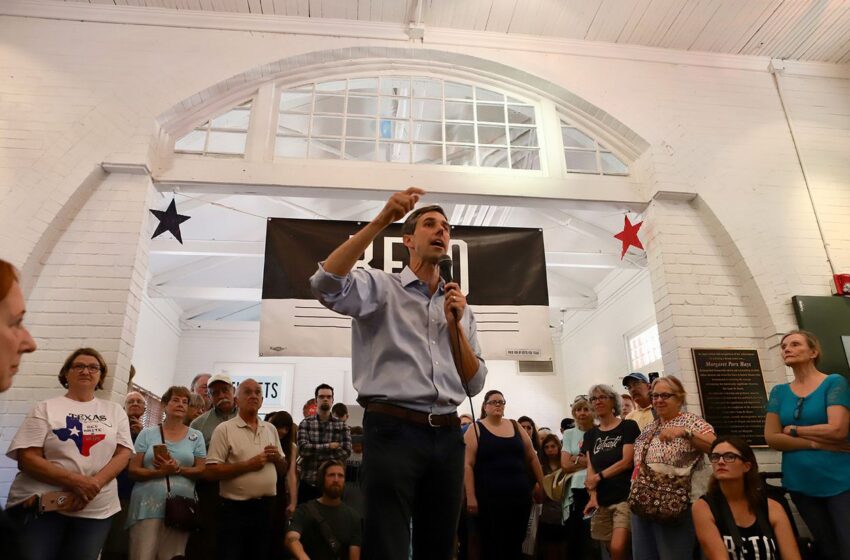 After tens of thousands of miles on the road, hundreds of town hall meetings and innumerable cups of coffee, U.S. Rep. Beto O’Rourke made the final stop on his much-ballyhooed tour of all 254 Texas counties on Saturday, visiting Gainesville in his continuing bid to unseat U.S. Sen. Ted Cruz this fall.

Over the last 15 months, O’Rourke’s county-by-county driving tour has taken him all over the state, from his hometown of El Paso on the Mexican border to Cooke County in the north, where he held a town hall on Saturday afternoon.

“Here we are in Gainesville, which, as the crow flies, might be the farthest point you can get from El Paso,” he said to laughter from a packed house in the historic Santa Fe train depot.

The tour represents more than just an expansive retail campaign across the largest state in mainland America. It also marks a dramatic deviation from the political playbook employed by the majority of Texas Democrats over the last two decades.

“Since 1998, what we’ve seen is the triangle — they go to Houston, Dallas, and Austin and San Antonio. They’ll do one swing through the Valley and one trip through El Paso,” said Colin Strother, a longtime Democratic strategist in Texas. “That’s not how we’re going to energize our own voters, educate new voters, and it’s not how we’re going to win. What’s exciting and refreshing about Beto’s approach is that he’s going to go campaign everywhere.”

The county-by-county tour started in March 2017, when O’Rourke kicked off his campaign with a rooftop rally in El Paso. “Beto said, ‘We are going to all of the counties,’ and some of us said, ‘Are we really?’” said Chris Evans, the campaign’s spokesman. “But we have been.”

Fueled by five cups of coffee a day, O’Rourke does about 80 percent of the driving himself, in a maroon Dodge Grand Caravan, Evans said. The candidate and his staffers subsist on a steady diet of trail mix, beef jerky and Hostess Cupcakes.

When he’s not behind the wheel, O’Rourke has proven to be a formidable fundraiser, regularly outperforming his more famous opponent. In the first quarter of 2018, he raised $6.7 million, more than any other Democratic candidate for U.S. Senate raised over the same period. But his performance in the Democratic primary in March was disappointing: Even as he coasted to a 38-point victory over challenger Selma Hernandez, O’Rourke lost several key counties along the Mexican border to the Houston activist. And a Quinnipiac University poll released last month found Cruz leading O’Rourke by 11 percentage points.

“Our campaign is based not on an arbitrary travel data point like our opponent’s, but on a vision and message that we believe Texans desire and want to see from their leaders,” said Catherine Frazier, a spokeswoman for Cruz.

The publicity generated by the statewide tour has helped O’Rourke, who entered the race as a little-known congressman, gain valuable exposure to Texas voters, said Mark Jones, a political scientist at Rice University. But the 254-county tour is ultimately just “a gimmick,” Jones said.

“Once you go beyond the top 100 counties, it’s not an especially efficient use of your time,” he said. “There are counties that have entire populations that are dwarfed by neighborhoods in Houston and Dallas and San Antonio and Austin.”

“I’ve seen pictures of him in Tyler County in east Texas. It’s the reddest of red counties, and based on the pictures I’ve seen he probably had 30 people there,” Strother said. “I’ve done campaigns a lot in east Texas, and I’ve never seen 30 Democrats in Tyler County. I didn’t know there were that many.”

Over the years, Cooke County has also been unfriendly to Democrats. In 2016, President Donald Trump won here with 83 percent of the vote. Cruz earned an almost identical portion of the county’s vote when he ran for Senate in 2012. At the town hall, however, O’Rourke chose to dwell on a different element of the county’s political history: Former president Harry Truman’s visit to Gainesville in 1948, in the run-up to his upset victory over Republican challenger Thomas Dewey.

Supporters acknowledge that O’Rourke remains a long-shot candidate, even in a political climate that might be favorable to Trump’s opponents. A Democrat has not won statewide office in Texas in nearly a quarter-century. Despite O’Rourke’s recent fundraising success, Jones cautioned, the candidate will have to accumulate significantly more money to compete with Cruz in November. And his campaign is unlikely to receive much financial support from the national party, which has prioritized a handful of Senate races in places where Democrats are more likely to succeed and statewide races are less expensive to run.

O’Rourke is not the first Texas politician to visit all 254 counties. When he ran for attorney general in the late 1980s, Democrat John Odam visited every county courthouse in the state in an effort to “listen and learn about the issues that were on people’s mind.”

In 1995, he published a book about his 254-county tour, “Courtin’ Texas: One Candidate’s Travels Through Texas’ 254 Counties & Their Courthouses,” which documents 18 months of grueling travel along the state’s highways — a physically taxing road trip, even for a candidate with four marathons under his belt.

“We’d go to the courthouse, go to a breakfast meeting, go to the next county and have a lunch meeting, and then keep on driving, keep on covering the state,” Odam recalled. “I know this sounds pretty naive and pretty elementary — but Texas is a damn big state.”

When the election came around, Odam lost by eight percentage points.