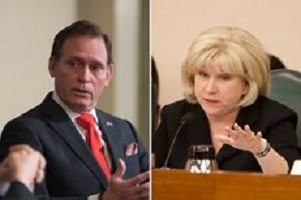 The House and Senate have passed their own versions of a budget, but crucial differences remain.

Now the two chambers must reconcile their funding priorities before they can agree on a final draft and send it to the governor.

But on some of the most hot-button issues, including public education and health care, the chambers took markedly different approaches about what to fund, how to fund it, and what to cut.

Here’s a look at how the two budget proposals compare, using information from the Legislative Budget Board.

The House and Senate are pretty close on their total spending, but their methods of finance vary greatly. The House would use $2.5 billion from the Rainy Day Fund, the state’s savings account that currently has a balance of more than $10 billion. The House also freed up $1.9 billion for the next two-year budget by delaying a payment for public schools.

The Senate, on the other hand, finds extra revenue by delaying a $2.5 billion payment to the highway fund that voters overwhelmingly approved in 2015 to boost the state’s efforts toward addressing congestion. House budget writers have argued that that accounting trick is unconstitutional.

Despite the program’s expected growth due in part to how fast the state’s population is growing, the House budget assumes it can cut costs by $2.6 billion because of “increased federal flexibility” under the Trump administration.

Neither the House nor the Senate budget covers the projected cost of medical inflation.

Public schools are another of the Legislature’s largest expenses, and the vast majority of that spending goes through the Foundation School Program. Texas public schools are expected to grow by more than 80,000 students annually, meaning the state needs to spend more in its next budget to maintain the current levels of spending per student.

The House budget would spend $42.1 billion on public schools. While that’s less than current state spending on schools, House leaders are also working on adding another $1.5 billion into public education through a separate school finance reform package favored by House Speaker Joe Straus. The House budget also pushes $1.9 billion into the next two-year budget cycle by delaying a payment to schools.

The Senate budget, meanwhile, would spend $42.0 billion, but it would cut state spending on schools by $1.8 billion. That is mostly made up for by revenue collected by local governments from rising property taxes.

Amid a crisis in the state’s child welfare system, lawmakers in both chambers voted to boost funding for Child Protective Services and foster care. Both the House and Senate are spending more money to tackle many of the same child welfare priorities, including hiring more CPS caseworkers and continuing pay raises for many frontline workers.

Yet each chamber’s budget only boosts funding by about half of what CPS told lawmakers it needed to address its most pressing problems. The House budget would boost spending for vulnerable children’s programs by about $546 million, while the Senate budget includes a $429 million bump.

The fight over pre-kindergarten funding has been one of the main political flashpoints of the legislative session so far. Texas Gov. Greg Abbott called on lawmakers to fund $236 million for his preferred “high-quality” pre-K grants — “or not at all.” Neither chamber is currently on track to heed his words. The House set aside $117 million for “enhanced pre-kindergarten capacity,” while the Senate offered $65 million for a “public-private partnership” for pre-K programs.

Despite a Republican president in the White House who has vowed to dramatically boost federal border security efforts, both chambers are largely committed to the surge in border funding they approved in 2015, which pays mostly for the stationing of state troopers in counties near the Texas-Mexico border.

Related story: Texas poised to maintain most of its border funding for Trump’s first years

Another touchy subject this year is whether lawmakers are willing to use their savings account to help weather tough times. The House proposal would use $2.5 billion from the Rainy Day Fund, which currently has a balance of more than $10 billion fed largely by state taxes on oil and gas production.

The Senate’s budget does not touch the fund, instead relying on an accounting trick involving transportation funds that has drawn sharp criticism from House leaders. Abbott has recently declined to take a firm position on the Rainy Day Fund, though he told lawmakers earlier this year he was confident they could balance the budget without “looting” their savings account.