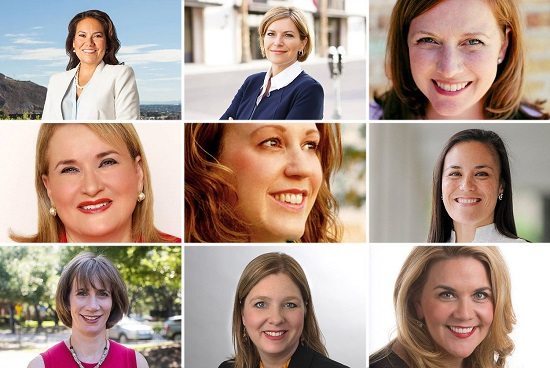 Eighteen months and several political lifetimes ago, U.S. Rep. Sheila Jackson Lee held court at a table at the Democratic National Committee Texas delegation breakfast in Philadelphia. Just hours before Hillary Clinton was set to become the first woman to accept a major-party nomination for the presidency, Jackson Lee conceded she was “worried … but not panicked” about the advancement of women in politics in her own backyard.

The Houston Democrat’s concerns stemmed from being one of just three women in the 38-member Texas delegation. The prospects of other women stepping in once all three retired, let alone expanding their ranks, seemed dim.

Fast forward to 2018, and Jackson Lee is no longer worried. In fact, she’s elated. Thanks to the polarizing response to Donald Trump and a rash of retirements in the delegation, women are coming out of the woodwork to run for federal office in Texas.

“It is a lifetime ago, and I’m glad I said what I said,” she says now. “I didn’t realize our work would be so accelerated, but it has.”

“I consider young women fixer-uppers — they come in when the country is in desperate need for common sense, for spunkiness, for strength, for nurturing and for knowing how to bring peace in the middle of discord,” she added.

For more than two decades, Jackson Lee has been part of a trifecta of women representing Texas in the U.S. House along with Democratic U.S. Rep. Eddie Bernice Johnson of Dallas and Republican U.S. Rep. Kay Granger of Fort Worth. Each of the three women was elected in a succession of cycles from 1992 to 1996. Joining them in 1993 was U.S. Sen. Kay Bailey Hutchison, who became the first woman elected to the Senate from Texas.

And then the drought came.

No freshman woman has come to Congress from Texas since Granger’s election 1996, with the exception of former U.S. Rep. Shelley Sekula Gibbs, who served as a placeholder for less than two months in late 2006. (Hutchison, who left the Senate in 2013, is now U.S. ambassador to NATO.)

The problem in Texas was not so much that women weren’t winning – it was that they weren’t running.

In interviews with candidates, officeholders and campaign consultants, the most-cited reasons for the lack of female candidates were concerns that gerrymandered districts would protect incumbents, an aversion to commuting to Washington while raising children and general apathy, a problem Jackson Lee cited back in 2016.

That all changed this year, in part due to a national backlash against Trump on the Democratic side and, in Texas, a wave of retirements on both sides.

Approximately 50 women have lined up this year to run for Congress in Texas, among hundreds running around the country. Of that sum, a handful are running well-funded, professional campaigns and have viable paths to serving in Washington.

“What a difference two years makes!” Dolly Elizondo, a 2016 candidate who came up short in her South Texas Democratic primary, wrote in an email about the new environment. “I am amazed and proud to see so many women and women of color running for office across this country and winning.”

Despite the Trump effect being seen across the country, the main reason so many women are running in Texas this year is the recent rash of vacancies of Texans in Congress. Most were retirements, but U.S. Rep. Beto O’Rourke created a vacancy in his heavily Democratic El Paso-based 16th district when he announced his run for U.S. Senate.

It is there that a new female member of Congress from Texas is most likely to emerge.

Former El Paso County Judge Veronica Escobar and former El Paso School Board President Dori Fenenbock are the best-funded candidates aiming to succeed O’Rourke, and former state Rep. Norma Chavez threw her hat into the ring just before the December filing deadline. Escobar and Fenenbock both cited the same reason as contributing to their decisions to run: Their children are old enough that they felt comfortable making the Washington commute without creating disruptions in their families.

Three men are also running in the Democratic primary, but the betting money among political observers is on El Paso sending a woman to Washington.

Another potential future congresswoman is state Sen. Sylvia Garcia, a Houston Democrat who is seeking retiring U.S. Rep. Gene Green‘s 29th District seat and has drawn Green’s endorsement. She faces a crowded field in a Democratic primary that will likely determine the outcome of the election. Houston political insiders say that, while there are no assurances, Garcia is in the driver’s seat for the nomination.

She ran for Congress previously in 1992 against Green and lost. Back then, she was part of another crush of women entering politics, at that time in response to the controversial Clarence Thomas Supreme Court hearings.

On the GOP side, Texas women running for open seats in Congress include political fundraiser Bunni Pounds and communications consultant Jenifer Sarver. Both women are in ferociously competitive primaries.

Pounds was a longtime fundraiser for the outgoing congressman in her district, U.S. Rep. Jeb Hensarling. She, like Garcia and Escobar, has the support of the man she is aiming to replace.

The stakes for the Republican Party to send some of these women to Congress are high, from a national perspective. The House GOP conference is bleeding female members due to retirements and women who are vacating their seats to run statewide. Making matters worse, other Republican women represent some of the most vulnerable districts on the 2018 map.

“Certainly, in D.C., there’s an awareness that there’s a lot of movement in female-held seats,” Sarver said. “While a lot of that movement is upward, some of that could be a loss of female members [in the U.S. House.]”

But for Democrats, this is also about a backlash against President Donald Trump.

“It was like a punch in the gut when she lost,” Fenenbock said of El Paso’s reaction to Hillary Clinton’s defeat. “And we have a very strong representation of female voters. But I think there was a wake up call where we said, ‘Look, we can’t lose these opportunities if we are going to make a difference.’”

A number of the Democrats running attended their local Women’s Marches last year following Trump’s inauguration. Former Air Force intelligence officer Gina Ortiz Jones is running for the Democratic nomination to take on U.S. Rep. Will Hurd, R-Helotes, in the most competitive seat in the state.

Jones served as a crossing guard at the national Women’s March in Washington that day.

“I knew after the election that night, I knew my time in public service would be different,” she said.

If elected, Jones, who is a first generation Filipino-American, would be the first Texan of an Asian-American background and the first openly LGBT Texan to serve in Congress.

That so many women are running – some in the same primaries – has created a sticky situation with the group, which has also endorsed Escobar and Lizzie Pannill Fletcher of Houston, both of whom are running in competitive primaries that include other women. Fenenbock called EMILY’s List decision to endorse her primary opponent “extraordinarily frustrating.”

“I have many friends who have given fundraisers for EMILY’s List and have friends, including myself, who have supported it for years,” Fenenbock said. “This is a bad trend, right now. We have women running, we should be supporting women who are running rather than pit them against each other. I don’t understand.”

“They’re getting a lot of phone calls about this race,” she added.

An end to the drought

There are dozens more women running for Congress in Texas, and the next round of campaign finance filings at the end of the month will show which candidates are prepared for the lead up to the March 6 primary.

Democrats Laura Moser, who is in the race to take on U.S. Rep. John Culberson, R-Houston, and Lillian Salerno, who is running in the primary to run against U.S. Rep. Pete Sessions, R-Dallas, are among those who already posted strong fundraising reports last year.

But many of these candidates are still getting their footing with fundraising. Some could burst through into a runoff as the March 6 primary looms. Other candidates running in long-shot races could emerge as serious contenders if a strong enough Democratic wave sweeps through Texas and catches an incumbent or two napping.

But even if some of these women run the best campaigns possible, many are likely to come up short anyway. Some are running in the wrong party to win their seat. In other cases, open seats and Trump ire have similarly attracted talented male candidates as well.

And for the women hoping to take on Sessions, Culberson and Hurd – three Republican incumbents drawing strong attention from Democrats this year – it’s worth remembering that incumbents keep returning to Congress year in, year out for a reason: They know how to win in their districts.

Regardless, the influx of enthusiasm and candidates means that it is very likely that a year from now, at least one woman from somewhere in the state will be sworn into the Congress for the first time.

Few of the women interviewed for this story initially understood of the historical stakes of their campaigns.

Pounds, the Republican running in East Texas, downplayed gender in her race.

“I am a conservative who happens to be a woman, not a conservative running as a woman, and I’m honored by the overwhelming support I’ve earned across all 7 counties in the short period of time since announcing my candidacy,” she wrote in an email.

Fletcher, one of the Houston candidates, took the opposite tack. She first became aware of the decades-long drought during a May interview with The Texas Tribune and has since used that as a rallying point among her female supporters.

“When I tell people that here, they’re similarly shocked,” she said. “Especially women.”

Democratic state Rep. César Blanco was the one who told Escobar, one of the El Paso candidates, that no Texas Latina had ever served in Congress.

“I thought that had to be some kind of mistake,” she said. “I could not believe that was really the case. I didn’t quite believe it because it does seem so shocking.”

She hopes she will not be the only one to make it. She considers Garcia, the Houston state senator, to be a friend and hopes they can break the glass ceiling together.

“It would be incredible to be in the freshman class with her, but also incredible by [not just sending] one Latina but by sending two,” Escobar said.

Disclosure: Jenifer Sarver has been a financial supporter of The Texas Tribune. A complete list of Tribune donors and sponsors is available here. 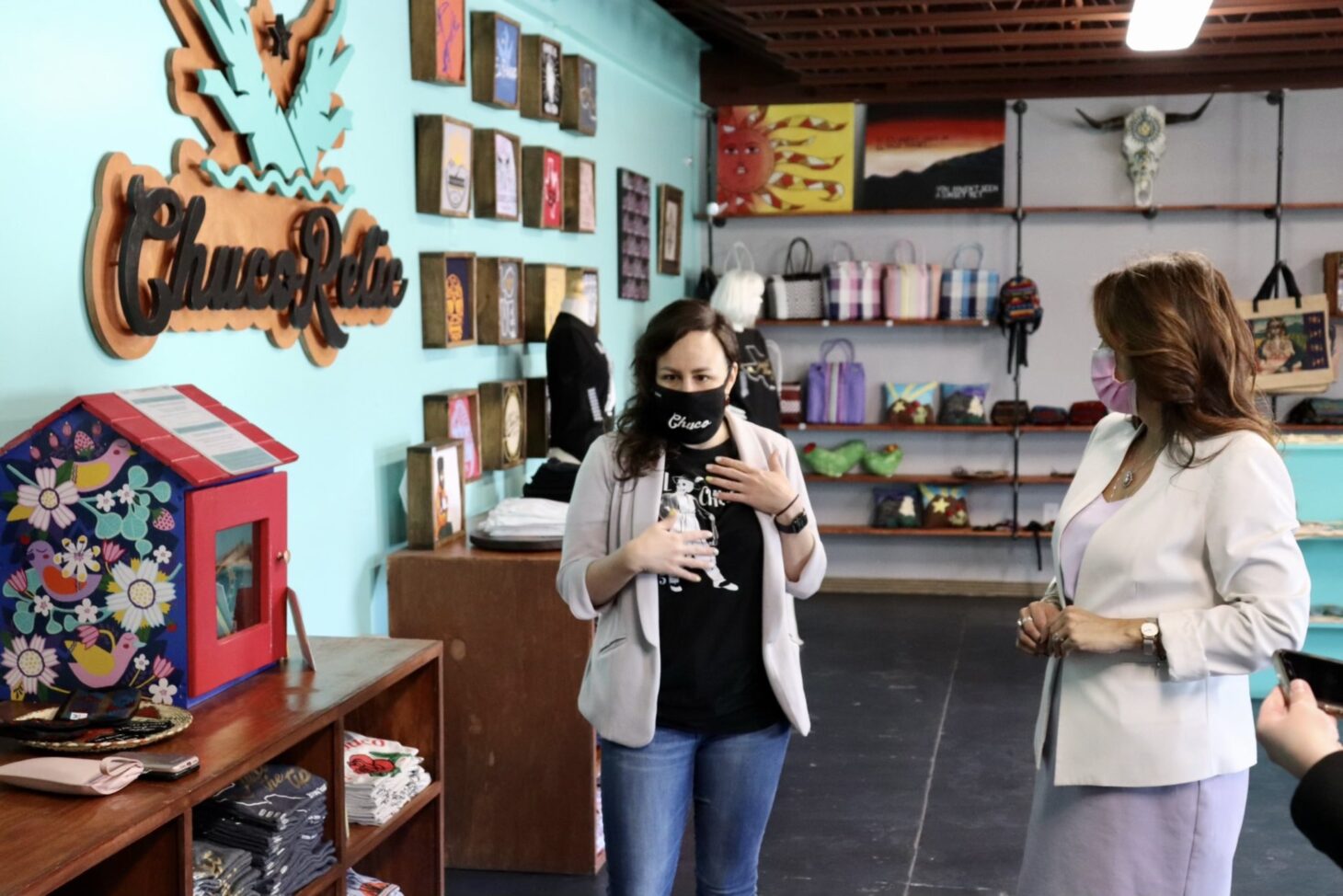