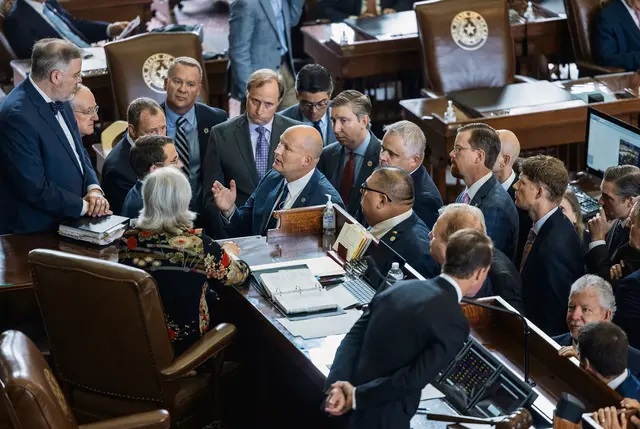 House Republicans crowd around the speakers’ desk to discuss a point of order attempting to strip absent members of their committee appointments on the House floor on Tuesday. Credit: Jordan Vonderhaar for the Texas Tribune

The Texas House voted Tuesday to send law enforcement to track down Democrats who left the state a day earlier in protest of Republicans’ priority elections bill “under warrant of arrest if necessary.”

More than 50 House Democrats left Monday for Washington, D.C., to deny the chamber a quorum as it takes up voting restrictions and other GOP priorities in special session.

The impact of the House move is unclear since the Texas law enforcement lacks jurisdiction in the nation’s capital.

Meeting shortly after 10 a.m., the House quickly established that it lacked the two-thirds quorum required to do business, with only 80 of 150 members participating in a test vote.

Then Rep. Will Metcalf, R-Conroe, chair of the House Administration Committee, moved to issue what is known as a “call of the House” to try to regain quorum. That motion passed 76-4. Metcalf offered another motion, asking that “the sergeant at arms, or officers appointed by him, send for all absentees … under warrant of arrest if necessary.” That motion also passed 76-4.

After Metcalf’s motions passed, Rep. Tony Tinderholt, R-Arlington, sought to move to strip absent Democrats of their committee leadership posts if they do not return by noon Wednesday.

The motion did not immediately get a vote, and in a subsequent exchange with Rep. Morgan Meyer, R-Dallas, House Speaker Dade Phelan, R-Beaumont, said committee chairs and vice chairs cannot be removed from their positions under the current chamber rules.

Earlier Tuesday morning, Gov. Greg Abbott said in a radio interview that any Democrat who fled the state should lose their committee leadership posts.