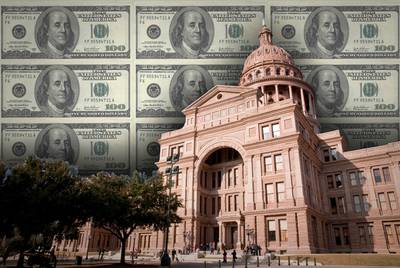 More than in any legislative session since the Great Recession, Texas lawmakers are signaling a willingness this year to dip into the state’s massive savings account.

Left untouched, the savings account, also known as the rainy day fund, would reach an unprecedented $15 billion over the next two years, according to official estimates.

State lawmakers have proposed an ambitious and expensive legislative agenda for 2019, and with economists raising concerns that an oversized savings account will lose value over time and weigh down the economy, Texas’ Republican leadership appears eager to dip into the piggy bank.

“I think we all are realistic that we may have to tap into the rainy day fund for one-time expenditures, more than we have in the past,” Lt. Gov. Dan Patrick said at a recent hearing.

Billions of dollars now in the state savings account

An oil boom that began in the early 2000s has poured billions into the state’s rainy day fund, but lawmakers have spent only a small portion of the fund’s balance, leading it to grow to $11 billion in 2018.

A proposal in the Texas Senate would spend $2.5 billion from the fund this year in a “supplemental” budget covering unfunded expenses from last session. The money would go toward a variety of purposes, including hurricane recovery-related costs for school districts, teacher pensions and school safety improvements.

Spending $2.5 billion at once would rank among the largest withdrawals in the fund’s history, behind only a $3.2 billion expense approved by the Legislature in 2011 following a national economic downturn. That year, lawmakers nonetheless slashed public programs, including cutting billions from public schools.

The Texas House, meanwhile, recommends spending $633 million from the fund in 2020-21, but that number will probably grow after the chamber unveils its supplemental budget for unpaid bills coming due this year.

When the Legislature created the Economic Stabilization Fund in 1987, no one expected it would grow as large as it has, said Dale Craymer, who helped draft the proposal as a staffer for then-House Speaker Gib Lewis. Craymer is now president of the Texas Taxpayers and Research Association.

In the 1980s, the Texas economy wilted amid an oil and gas downturn. Lawmakers raised taxes and cut public programs to dig themselves out of a budget shortfall. They created the stabilization fund as a way for the state to set aside money, earned when oil and gas revenues were robust, to be spent during times of economic hardship — effectively insulating public programs from whiplash as oil and gas prices rose and fell.

Starting in the early 2000s, as drilling technologies allowed companies to access new fossil fuel reserves, the state raked in tax revenue and the fund swelled. Meanwhile, the growing balance became a point of pride for some conservative lawmakers, and the Legislature became more reluctant to make large withdrawals. But that may be changing this year, Craymer said.

“It was created to be a tool, not a sacred cow,” he said. “At some point you have to ask the question, ‘How much is too much?’”

Flow of cash into and out of the state savings account

The Economic Stabilization Fund was created to allow lawmakers to set aside money during flush times to be spent when revenue came up short. Over time, money coming in has greatly exceeded the money going out.

The fund has $11 billion, enough money to cover 10 percent of all state funds Texas currently spends in a two-year budget.

Policymakers have floated radically different ideas about how much money the state should keep in savings, and Republican politics have evolved about what “rainy day” expenses are considered acceptable.

In 2015, the Legislature diverted about half of the money that would have flowed into the savings account to go instead to the state highway fund. By doing so, it slowed the rate at which the Economic Stabilization Fund could grow.

This year, Gov. Greg Abbott has discussed diverting more oil and gas tax revenue from the savings account to “build a sustainable education fund.” Critics worry such a proposal could lead schools to be too dependent on a volatile revenue source while further limiting the savings account’s ability to grow.

Comptroller Glenn Hegar has asked the Legislature for more authority to invest part of the savings account in an endowment so that it earns more money over time. Hegar has suggested using the returns on that investment to pay for long-term liabilities, such as public employees’ pensions, that the Texas Legislature chronically neglects.

Under current law, much of the fund must be kept available to be spent on short notice, limiting the fund’s ability to maintain its value. As of August, most of the fund’s balance is kept in short-term investments yielding returns of about 2.1 percent, a rate not high enough to keep pace with inflation, Hegar said.

“In effect, the state is losing purchasing power and leaving money on the table that could be raised through common, prudent investment strategies,” he wrote in a report last year.