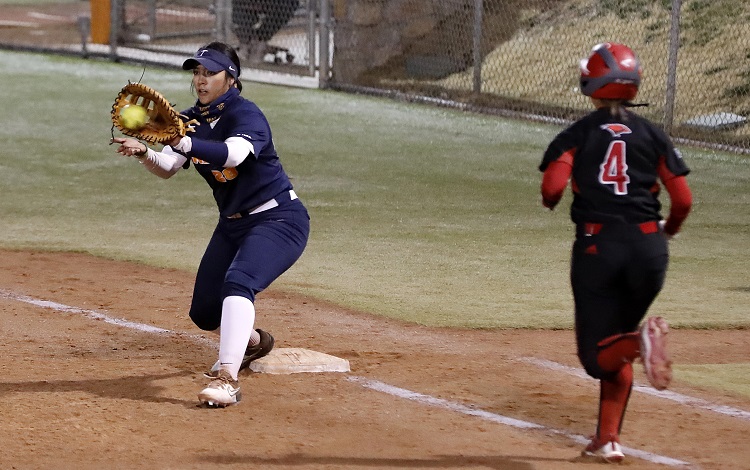 LUBBOCK – UTEP softball (4-10, 0-0 C-USA) was shutout and held to two hits in its two losses to Texas Tech (14-8, 0-0 Big XII) on day one of the Jeannine McHaney Memorial Classic at Rocky Johnson Field Friday afternoon.

The Miners were mercy-ruled, 8-0, in both games by the Red Raiders.

Texas Tech loaded the bases on three bunt base hits in the first inning but was only able to score two runs – one on a sacrifice fly and the other on a walked-in run, 2-0. The Red Raiders filled the bags once more in the next bottom half inning and three more runs cross the plate on another walked-in run, a hit-by-pitch and a catcher’s interference, 5-0.

Despite being down 5-0, Calderon had not allowed an extra-base hit in the game until the third inning. That hit was a two-run homer by Karli Hamilton. The Red Raiders scored their final run of game one off an RBI double later in the inning, 8-0.

Redshirt sophomore outfielder Idalis Mendez recorded the Miners’ only hit in the game with a leadoff double in the fourth inning. Mendez’s batting average now sits at .571 this season.

The Red Raiders found their hit with runners in scoring position they were looking for earlier in the day in the first inning of game two.

Sophomore Ellie Bailey emptied the bases with her first career homerun – a grand slam to left-center field. Texas Tech added one more run in the first inning with a triple in the right-center gap, 5-0.

The Miners’ best opportunity to score in the day came in the third inning when they loaded the bases behind a leadoff single from fifth-year infielder Bryanna Molina, a reached-on-error by Calderon and a walk by Mendez.

After allowing an unearned run to score in the bottom of the third, freshman pitcher Mackenzee Collins found her groove with two shutout innings.

However, the Red Raiders added a pair of runs with a walk-off double off Collins down the leftfield line to score two more runs.

The Miners’ game with the Red Raiders will be available for streaming on ESPN+.