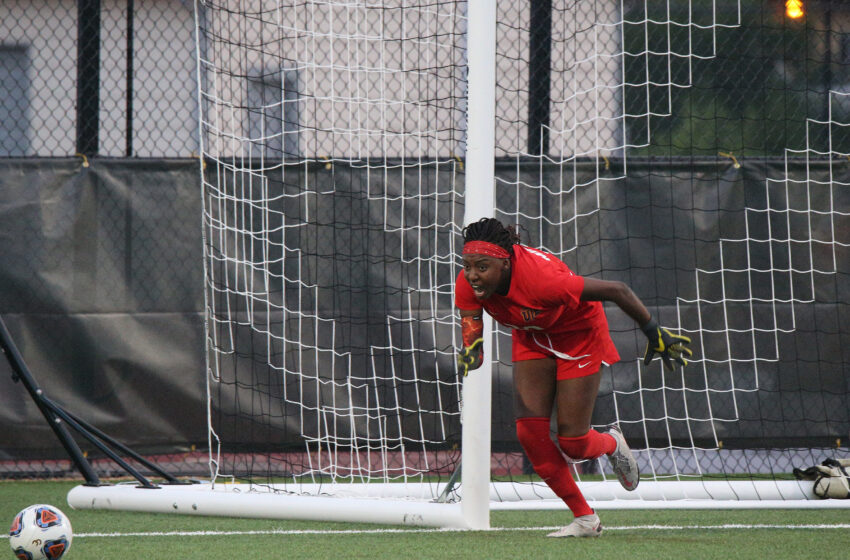 LUBBOCK – UTEP battled, defended with grit and possessed well in a 1-0 loss at Big 12 member Texas Tech in the season opener for both squads Thursday evening.

The 2019 Big 12 Offensive Player of the Year, Kirsten Davis (37’), provided the lone goal in the game to propel the homestanding Red Raiders (1-0) past the Miners (0-1). Goalkeepers Mariah Scott (three saves) and Emily Parrott (two saves) combined for five stops on the night.

“We had solid improvement in our individual and team defending from the Colorado College exhibition,“ UTEP head coach Kathryn Balogun said. “I would have liked to see us a little more creative in breaking and taking players on offensively. Overall, I’m happy to go on the road in a competitive environment and compete for 90 minutes.”

The UTEP defense did a good job to snuff out an early Tech corner five minutes in. Parrott was called upon for the first time in the 12th minute, gobbling a shot up by the dangerous Davis.

The sophomore GK was up to the task again in the 30th minute, diving to her left to once again stop Davis. The Miners then went on a counter attack to earn their first corner kick of the game, but they couldn’t capitalize on the chance. TTU was back on the attack in the 37th minute, with Davis redirecting a pass from the box into the lower, left corner.

The Miners did well to up their possession in the second half, limiting Texas Tech to one shot attempt over the first 14 minutes of action. That changed after a giveaway from UTEP sprung Davis on a breakaway. Scott, who entered for the second half, would be ready. She came off the line, cut down the angle and got wide to make a brilliant save and keep it a one-goal game.

Scott delivered another terrific save in the 80th minute, leaping to punch a shot by Hannah Anderson up and over the frame. UTEP then staved off three consecutive corner kicks. The Miners sent players up the pitch down the stretch to try to find the equalizer, but it wasn’t in the cards.

“I can’t wait to get back home to University Field in front of our home fans for our home opener on Sunday,” Balogun said. “I encourage everyone in El Paso to come out and support because you won’t want to miss one game this season.”

The Orange and Blue will return to action with the home opener against Abilene Christian at 1 p.m. MT Sunday (Aug. 22). It will be “Camper Reunion Day” in addition to “Kids Day.” Tickets are $8. Fans may call (915) 747-UTEP, visit UTEPMiners.com/tickets or stop by the Eisenberg Family Ticket Office (Brumbelow Building on UTEP campus, 201 Glory Road) Monday thru Friday, 8 a.m. to 5 p.m. Season tickets  also remain on sale this week, but single-game and group tickets for $5 (minimum of 10 tickets) may also be purchased.