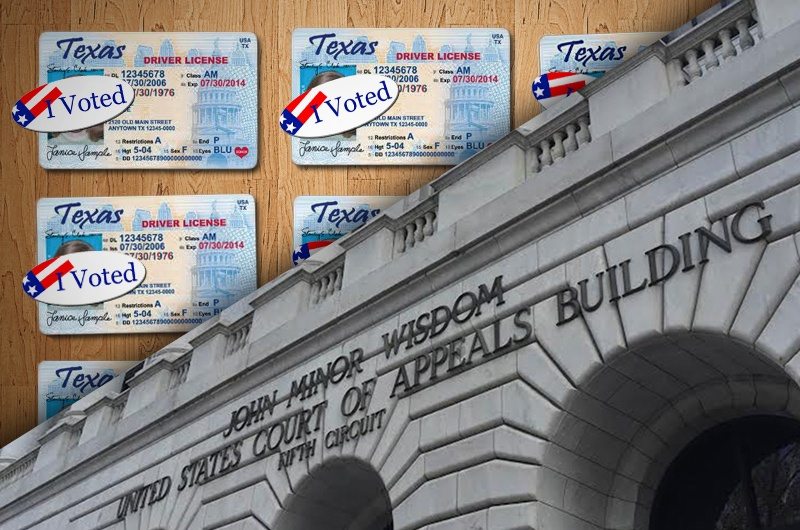 The U.S. 5th Circuit Court of Appeals affirmed previous rulings that the 2011 voter ID law — which stipulates the types of photo identification election officials can and cannot accept at the polls — does not comply with the Voting Rights Act.

The full court’s ruling delivered the strongest blow yet to what is widely viewed as the nation’s strictest voter ID law. Under the law, most citizens (some, like people with disabilities, can be exempt) must show one of a handful of types of identification before their ballots can be counted: a state driver’s license or ID card, a concealed handgun license, a U.S. passport, a military ID card, or a U.S citizenship certificate with a photo.

Texas is among nine states categorized as requiring “strict photo ID,” and its list of acceptable forms is the shortest.

Texas’ losing streak continued in its efforts to defend its law, fighting challenges from the U.S. Department of Justice, minority groups and voting rights advocates. Wednesday’s ruling did not immediately halt the voter ID law, which has been in effect since 2013. The judges kicked that decision back to a lower court.

“It is imperative that the State government safeguards our elections and ensures the integrity of our democratic process. Preventing voter fraud is essential to accurately reflecting the will of Texas voters during elections,” he said.

Experts have closely watched the case, calling it one of two such battles that the U.S. Supreme Court could ultimately settle — helping to determine the point that states — which assert they are protecting the integrity of elections — cross over into disenfranchisement.

The 5th Circuit is considered one of the country’s most conservative appellate courts, with 1o of its 15 members having been appointed by Republican presidents.

The case centered on whether Texas discriminated against Hispanic and African-American voters when it passed the legislation: Senate Bill 14.

Paxton, Gov. Greg Abbott and other proponents argued that the law was needed to bolster security at the ballot box by preventing voter fraud, but opponents cite the paucity of proven in-person voter fraud in the state and argue the intent was to undercut the electoral strength of the state’s growing minority population — people less likely to have photo identification or the means to obtain an election certificate.

Experts have testified that more than 600,000 Texans lack such identification, though not all of them have necessarily tried to vote. Those citizens can obtain “election identification certificates” free of charge, but only if they are able to produce a copy of their birth certificate.

Texas argued that opponents of the law had “failed to identify a single individual who faces a substantial obstacle to voting because of SB 14.” In Wednesday’s ruling, the majority rejected that argument.

“For one thing, the district court found that multiple Plaintiffs were turned away when they attempted to vote, and some of those Plaintiffs were not offered provisional ballots to attempt to resolve the issue,” the ruling stated.

Seven of the court’s 15 judges backed the decision in full. Two other judges backed most of the decision. Dissenting judges wrote that the “en banc court is gravely fractured and without a consensus. There is no majority opinion, but only a plurality opinion that draws six separate dissenting opinions and a special concurrence.”

More specific to the Texas law, some of the dissenting judges wrote that “requiring a voter to verify her identity with a photo ID at the polling place is a reasonable requirement widely supported by Texans of all races and members of the public belonging to both political parties.”

“We have repeatedly proven – using hard facts – that the Texas voter ID law discriminates against minority voters,” Gerry Hebert, executive director of the Campaign Legal Center and an attorney for the plaintiffs, said in a statement. “The 5th Circuit’s full panel of judges now agrees, joining every other federal court that has reviewed this law. We are extremely pleased with this outcome.”

Gov. Rick Perry signed the law in 2011, kickstarting its convoluted journey through the federal court system.

Early legal challenges put the rules on hold until 2013, when the U.S. Supreme Court struck down part of the Voting Rights Act, ruling that Texas and other states with a history of racial discrimination no longer automatically needed federal pre-clearance when changing election laws.

In August 2015, a three-judge 5th Circuit panel ruled that the law did have a “discriminatory effect,” in violation of the Voting Rights Act, although it did not constitute a poll tax as a lower court had ruled.

Wednesday’s ruling affirmed those findings, and sent the case back to the U.S. District Court for the Southern District of Texas.

The appeals court, however, did not find enough evidence to back the district court’s ruling that the Legislature intended to discriminate against certain voters. The judges told the district court to reconsider the evidence.

On Wednesday, Abbott cheered that finding, but lamented the rest of the ruling.

“Voter fraud is real, and it undermines the integrity of the election process,” he said in a statement.

It’s not clear what that court’s remedy might look like. Experts called it unlikely that the court would throw out the law completely.

“The remedy is NOT going to be to strike the Texas voter ID law as a whole,”  but instead to fashion some kind of relief that give people who have a reasonable impediment to getting an ID the chance to get one,” Rick Hasen, an elections expert at the University of California, Irvine School of Law, wrote on his blog.

“Further, given the timing of the election, the trial court has to craft some kind of interim relief and then can figure out a more comprehensive solution after the next election,” Hasen added.

After each loss, Texas has appealed. Through April, Paxton’s office had spent more than $3.5 million defending the law in several lawsuits, its records show.