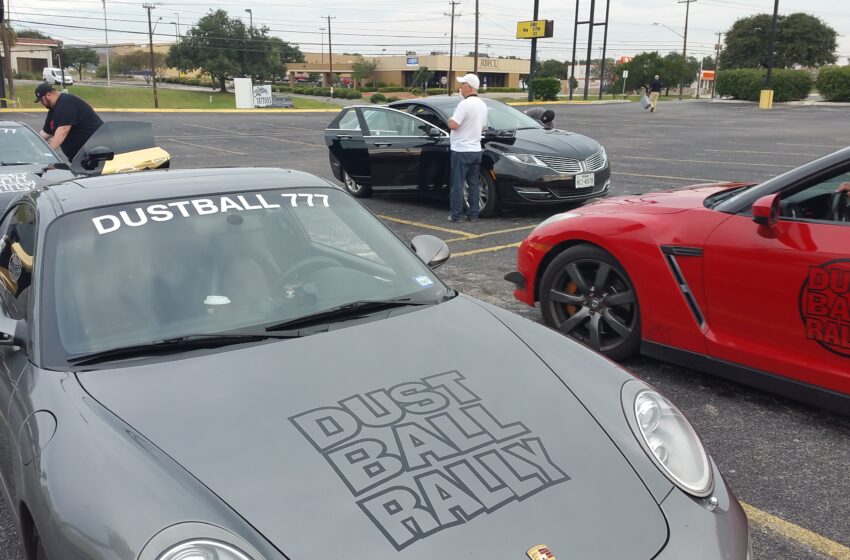 This year’s Dustball 777 was planned to traverse a very exclusive number of teams from San Antonio to Bossier City, and finish in the diverse city of New Orleans.

Only 12 people were attending this particular event, boasting vehicles such as trio of Nissan GTRs, one Porsche 911, one 1971 Chevelle and a pair of returning Dustballers that decided to fly in from Minnesota and rent the biggest engined rental they could muster (which turned out to be a Lincoln).

The driver meeting was merely a formality and more of a group of friends that wanted to go out together one night, as all but one team were either veterans or returning Dustballers.

Many other Dustballers that live in the San Antonio area decided to come out and show support and visit with the teams during the evening get together. After a short evening, most of us decided to call it a night and head to bed.

Of course being the organizer for this event and sole staff member in attendance, I had plenty of things still to do, finally calling it a night after 2:30am.

Day One: Thurs, Nov. 10th – 8:00am – San Antonio, TX to Bossier City, LA
My alarm went off at 6:00am, and the initial grogginess made me question my whereabouts. After realizing where I was, I jumped out of

bed and prepared for the day. In the back of my mind I was thinking that I had better get it together if this is how the first morning is already going.

I packed my things and went down to the car to prepare for the day. Grabbed a quick bite, go juice and slapped the stickers on the partially-clean 911. Arriving at the start, I was only a few minutes early but started to wonder if I gave the correct start time/location as several arrived slightly late.

The route eventually lead us to some amazing roads just East of Austin, TX that were not only empty, but chocked full of tight turns, twists and healthy elevation changes that made even the driver gulp a few times.

After the first fuel stop I started noticing Trump/Pence stickers appearing on the cars, and eventually a full sized “Make America Great Again” Trump flag proudly waving from the back of one of the GTRs at speed. Being less than 36 hours since Hillary Clinton conceded the presidency, it was very fresh in the minds of all those around us, in all of the towns we drove through.

Everyone on Earth knows how incredibly crazy the past year has been, regarding the presidential elections here in the US. And just how controversial it has been.

Compared to that number of people, only a handful truly understand the comic relief of slapping offensive stickers on the backs of other rally vehicles.

This tradition is very prominent and strong within the Dustball Rally, thus nobody removes the stickers that their vehicles are graced with, as sort of a challenge of survival. Realizing that the tradition is only really known by a handful of people, some of us began researching

certain counties to see if they were recently won by “red” or “blue.”

Being such a currently divided country, and the violence that has been so widespread towards those that support Trump – we were actually scared of vandalism – but kept strong to tradition and left the stickers on.

In areas where “red” was won, spectators of the amazing vehicles decked out in Trump décor were cheering us on and making jokes about the election all in the same moments.

Being as we drove mostly through “red” counties, there wasn’t very much negative feedback (from what we could tell, anyway).

We stopped for lunch in one small town in Texas, occupying one of the largest tables in the place.

Shortly after our arrival, about 12 law enforcement officers based in the area arrived and sat at the large table right next to us. We are all very aware that they noticed the cars outside, and felt confident that we wouldn’t be harassed because a. We were only eating lunch and, b. Our cars boasted Trump stickers, and Trump is a large supporter of Law enforcement at all levels.

community, and understanding that it is truly not the as glamorous as Will Smith and Martin Lawrence (as well as other countless celebrities) make it look.

She explained that she got home at 4am from a night shift working a case, but still had to report back to duty at 8am for her shift the next day. We appreciated her service to her community.

Our overnight stay was very welcomed, at the Horseshoe in Bossier City. We were welcomed with a deafening fountain, excited valets and huge rooms.

After a short rest, we met downstairs for dinner and drinks together, and talked about the wild day as well as politics, other cars and whatever happened to the Chevelle team.

Day Two: Fri, Nov. 12, 8ish am – Bossier City, LA to New Orleans, LA (via Mississippi)
After an entire evening of all the teams trying to

convince me to bend the rules and start at 8:30am, I was admittedly confused as to whether the issue was set in stone or not.

Didn’t really matter, as the sleep deprivation had caught up to me (as well as a fireball shot that somebody slipped in the night before) and I admittedly woke up late, showing up at the meeting spot 20 minutes after the posted time.

It was clarified that I was wrong, to this day I am still unsure as to whether everyone else was actually on time or not. At any rate, I distributed the packets and we were off on the adventure that Day 2 would hold.

The winding roads were blamed for a few co-drivers that made extra use of plastic bags that were found in the cars.

Years ago we provided actual barf bags for some of the routes, but did not believe this particular day warranted it.

It was definitely a combination of the drive with the previous night’s shenanigans. Without a doubt, the roads were phenomenal containing plenty of tight turns, wide high-speed sweepers and long open straights.

Every single car was put through the paces as Dustball does without fail during every rally. My red calipers were now black with hints of red, and visible scrub marks began to appear on tires.

As we neared New Orleans, Trump stickers began disappearing from the cars. At this point the game wasn’t as important as avoiding real property or actual physical harm.

The guys in the rented Lincoln said they had purchased the insurance and forged on the longest with Trump stickers displayed.

I think the thought of bodily injury lead to their decision to pull them off, as we traversed deeper into the dark blue areas that New Orleans had been recorded as, during the very recent election.

At this point, the rally was nearly over and not alcohol, but food was on everyone’s minds. One of the sponsors in attendance arranged for a

dinner in a private room with a balcony over looking the market.

In the bar downstairs, a group of Japanese filmmakers were shooting a film about their visit to New Orleans as a parade marched by outside
for a newlywed couple.

We were definitely in a different place.

As the night pressed on, each person had an idea of where to go and we all followed, one-by-one to share the same experience together.

Despite the small group, it was an event that tied us all just a little closer together, and we all cannot wait to see each other again on the next Dustball.

We will see each other again, with many other Dustball family members at our next reunion next April in El Paso, right before we embark on a breathtaking journey together to Las Vegas, NV. Join us, and become a part of the family.

The Motoring Life: A Series of Fortunate...