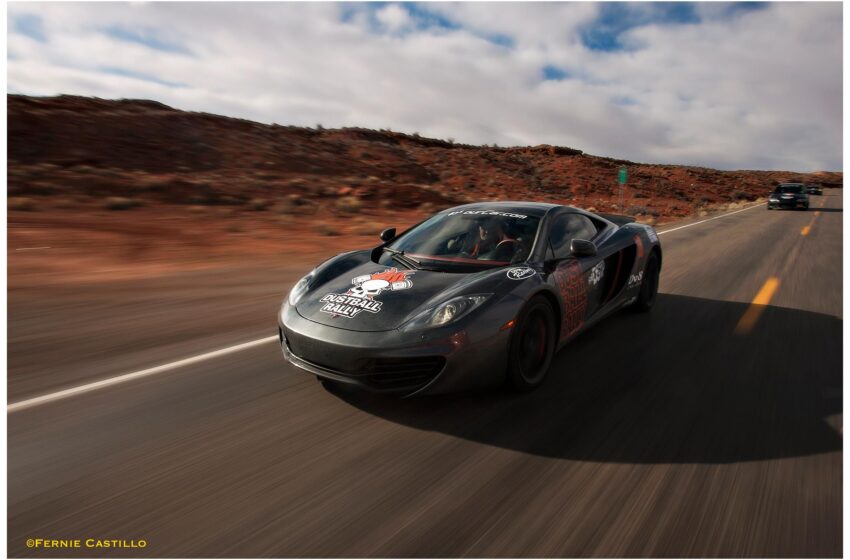 In the past 20 years, I have been given the great opportunity of driving many amazing cars, but few really meet the ridiculous expectations that I have for them. One of those cars is the McLaren MP4-12C. It is a British supercar that  until recent times, created very few numbers of some very incredible cars.

I always envisioned the original McLaren F1 as my personal unattainable dream car — being as they go for over $1M. In more recent times, McLaren has started to compete with other supercar manufacturers by creating the more modern and watered down version — the MP4-12C. And I always said watered-down, until I was handed the keys to one. Let me tell a little story:

Obviously, nearly everyone that reads my articles knows that my wife and I love to drive so much, that we invite all our friends to drive with us regular annual events, called Dustball Rally.

We organized a rally in the spring of 2013, that ran from El Paso to Las Vegas — via Utah — with one secret overnight stop in the middle of nowhere. It is truly great fun, as we hit the roads less traveled and marvel at the genius of civil engineers in every state of the United States.

For this particular event, there was a wide variety of domestic, foreign and European supercars that signed up to go, one of which was a McLaren MP4-12C.

Being the first time I ever would get the chance to see an actual McLaren in person, I was instantly ecstatic when it arrived.

Obviously it wasn’t an F1 or a Longtail, but it was a McLaren nonetheless, and it was bearing Dustball stickers!! I was completely blown away, as the car was far more beautiful in person than it is in pictures.

This was just the teaser, as I was piloting the camera vehicle — a supercharged Range Rover — and got to see this amazing car in action. It sang as it cruised near us, and screamed when it left us.

It was like seeing the most inspirational movie in the galaxy, as it gave me goosebumps during both days of driving as we witnessed it on the road.

It wasn’t until all of the Dustball cars gathered at Las Vegas Cars and Coffee, that I had the opportunity to really meet the owner, via the garage manager, and talk to him about this amazing car.

The owner’s garage manager, JP, knew how much I loved McLarens and setup the meeting, pushing me to ask for a ride.

Knowing how annoying this can be, I declined but he literally pushed me into it in which the owner replied, “well of course, but do you want to drive it?” I stuttered and couldn’t answer, but finally with the help of JP, I uttered a “Really? Yes, please!”

To which he surprised me even more by walking me towards the car and opening the passenger door saying “take your wife!”

Leandra (my wife) hopped in and the owner proceeded to give me the full rundown how the vehicle operates, starting with how to open the doors. This can be confusing, as I discussed in a previous article, that supercars aren’t driven like any other car.

There are buttons and settings and levers and latches literally all over the place in most of these cars, but the McLaren has a very clean look, that isn’t confusing at all.

To the driver’s eyes, everything is in front of him that he wants, and nothing unneeded is bearing down on the visual appeal. This car was in fact beautiful from the inside and out.

Sitting in the seat was like putting on a perfectly-fitting leather glove, it just hugs you with warmth and love. This felt like the car was being affectionate, in its own luxurious and professional manner.

All the controls were within less than an arm’s reach, and relatively easy to understand, once explained. The feeling of the car as we drove away was of a lightweight rocket ship, like the perfect weapon of choice for attacking the most complicated design of roadways.

Taking off out of the parking area was quick and agile like a ninja, but much louder despite it not being set to race mode. We ripped down the road a bit and the feeling I couldn’t shake was that it felt like a video game — but we had the supreme cheat code — nobody could beat us.

As badly as I did’t want to return the vehicle, I also realized the value of it and wanted to go ahead and get it back to the properly insured. I literally had a permanent grin on my face, and it began to subside as I attempted to get that feeling back over the next two years of test driving different cars.

It literally ruined every car I had ever driven, having been the most absolute perfect car in my personal opinion –albeit pending your geographical location. For rallies and track days — this car is perfect.

For daily driving in El Paso — no freaking way. The car is only practical for special events, which makes it less perfect, but still amazing. These days the MP4-12C, and 650S are far more commonplace as their values have begun to dwindle.

Still a six-figure buy, and in my opinion definitely worth it over anything else that you would want for these purposes. I look forward to one day, possibly, maybe, seeing one in my garage.