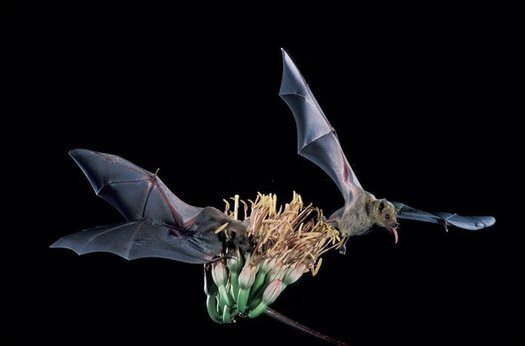 SANTA FE, N.M. – Three endangered species native to New Mexico, a bat and two plants, have recovered significantly – a development that conservation groups credit to the protections of the Endangered Species Act.

U.S. Fish and Wildlife Service officials are proposing to take the lesser long-nosed bat, which ranges across southern New Mexico and the southern border, off the endangered species list.

Michael Robinson, a conservation advocate with the Center for Biological Diversity, says the bats are now thriving, because agencies kept people away from the places where the bats build their nests.

“Where the bats have their babies and raise them for several months before they fly hundreds of miles south, those are very susceptible to human disturbance,” he explains. “So, some of these caves and rocky outcroppings have been protected, through simple measures like gates.”

The agency also wants to de-list a plant known as gypsum wild buckwheat, and to change the status of the Kuenzler hedgehog cactus from endangered to threatened.

Robinson says these plants, native to southeastern New Mexico, are now flourishing because of restrictions on development and off-road vehicles that will remain in place.

So far, 32 species have fully or partially recovered under the Obama administration, with another dozen making progress. That’s the more than under all previous presidents combined since 1973, when President Richard Nixon signed the Endangered Species Act.

But opponents of the act complain that the regulations are burdensome and don’t work, so Robinson says he’s worried the direction the new administration might take.

“The Republican Congress has passed measures to try and gut the Endangered Species Act, and only the opposition of the White House stopped them,” he points out. “So, we are very concerned that the safety net for endangered species could be ripped to shreds.”

In the past few years, the U.S. House of Representatives has floated dozens of proposals to chip away at the law. Various bills have sought to deny some species a place on the list or take others off, to remove the habitat protection, and to lessen the role of science in making these determinations.