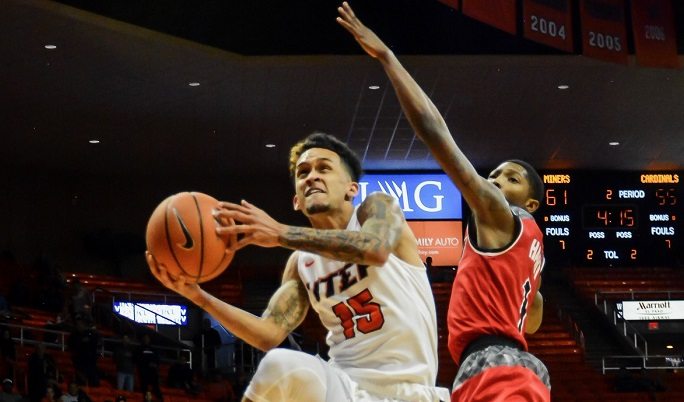 With only eight scholarship players available due to injuries and illness, UTEP battled back to upend Incarnate Word for its third consecutive victory, 72-66, on Tuesday at the Haskins Center.

The Miners (4-6) began a stretch of three games in four nights with a much-needed win.  UTEP will take part in the WestStar Bank Don Haskins Sun Bowl Invitational on Thursday and Friday, hosting Howard on Thursday at 7 p.m. before facing either North Dakota State or UNC Wilmington on Friday at a time to be determined.

UTEP was minus Isiah Osborne (strep throat) and Matt Willms, who is recovering from a broken hand, on Tuesday as well as Trey Wade, who was out of town with family following the passing of his grandmother.

The Miners were also coming off a 10-day break between games, and the rust showed throughout.  But UTEP finally got going after UIW (5-4) took a six-point lead, 49-43, midway through the second half.

UTEP Interim Head Coach Phil Johnson was ejected after picking up his second technical foul with 15:32 remaining in the second half, and Bobby Braswell coached the team the rest of the way.

“I really wanted to send a message to the team.  Not through a T, just with some energy,” Johnson said.  “The rust showed after 10 days off.  We’re a better basketball team than we showed.  But at the end of the day we pulled it out.  I’m really pleased with Tirus Smith, a freshman that was able to post up and score 15 points.  It’s really nice to see four guys in double figures.  So I was really happy with that.  We had six turnovers in our last game.  Six.  And 18 tonight.  And that’s a result of really not playing, I think, and just practicing.  And believe me, we practiced really hard.  But we were a little bit rusty.  We’ll clean that up and we’ve got to get some things better.”

Smith gave the Miners a major boost inside, making 7-of-11 shots while pulling down six rebounds.  Paul Thomas led UTEP with 16 points, while Omega Harris had 15 and Kobe Magee scored all 12 of his points in the second half.  Harris moved up another notch on the Miners’ all-time scoring list; he now ranks 22nd with 1,168 points after passing William Smith.

Socks led the Cardinals with 21 points.  UIW outrebounded UTEP 33-30, although the Miners won the battle of the boards (18-16) after halftime.

The Miners shot 61.5 percent in the second half, when they outscored UIW 44-38.  It was a sloppy game on both sides, as UTEP finished with 18 turnovers to the Cardinals’ 25.  The Miners scored 32 points off turnovers, and UIW scored 22.