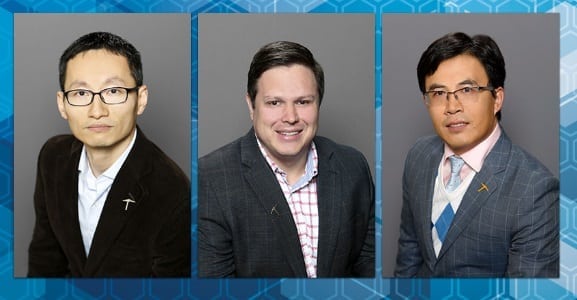 Three UTEP professors will learn this week if local investors and the Medical Center of the Americas (MCA) Foundation will fund their health-related inventions and accompanying business plans. They are among 11 technology startup companies involved in a proof-of-concept contest.

The University of Texas at El Paso professors – Yirong Lin, Ph.D., and Norman Love, Ph.D., associate professors of mechanical engineering; and Xiujun (James) Li, Ph.D., research professor of bioanalytical and environmental chemistry in the College of Science – comprise two teams in the competition hosted by the MCA Foundation.

The teams will demonstrate their devices’ capabilities from 3 to 7 p.m. Friday, June 29, 2018, in the Cardwell Collaborative, 5130 Gateway Blvd. East, the MCA’s biomedical research facility in Central El Paso. The event is free and open to the public, but guests must register at mcafound.org.

The startups have called the Cardwell Collaborative’s Innovation Center home since July 2017. While there, they have honed their inventions and received assistance from industry experts to craft business plans to market those products.

Lin and Love developed thin, 3-D-printed plastic cells with chemical sensors that can detect an individual’s blood-alcohol content. Li’s product is a portable, point-of-care device that can detect meningitis and pertussis, also known as whooping cough.

The competition’s objective is to create new, high-tech business opportunities that can remain in the region and positively impact the local economy and the number of high-growth professions, said Jeff Fuchsberg, director of intellectual property and innovation projects at the MCA Foundation.

“The work being done by these teams is part of a broad, regional effort to create more high-skill, high-wage jobs by cultivating innovative technology hubs,” Fuchsberg said. “We wanted to take what looks to be a promising technology and turn that into a high-impact product. In many respects, all these startups are already winners. They will take everything they’ve learned and be able to continue to work, develop and secure additional funding for their products after our demo day.”

Love and Lin were unsure how to utilize the technical expertise they had culled as professors until they conducted surveys and focus groups, practices uncommon for research engineers.

“That was really out of our comfort zone,” Love said. “We had this knowledge and ideas but we didn’t know if we would have customers. It wasn’t until we conducted these surveys that we realized what to create that would help the public and be marketable.”

Love said the 3-D printed cells the team created read various metrics present on a person’s skin to determine if their blood-alcohol level reaches a certain blood-alcohol content. The cell would change color from orange to blue once it reached its limit.

Love said the cells cost about $1 each and could be marketed at bars, concerts and sporting events. They could be customized to resemble logos or other identifiable markers that could tie it to a given venue.

“So, for instance, we could make them look like the UTEP logo or the pick,” Love said. “That’s the marketing aspect of this. It makes wearing the device fun. But at its core, this is something that could help people make better decisions when drinking.”

Love added that the competition has offered a newfound perspective and appreciation for the marketing aspects of inventing. He said that knowledge would pay dividends for his students.

“There’s a piece of our mission statement here in the mechanical engineering (department) that speaks to making sure our graduates leave here with an entrepreneurial spirit,” Love said. “Taking part in this competition will help Dr. Lin and I be better able to offer lessons in that notion to our students. I feel better prepared to answer those questions and help students understand what it takes to go the business route.”

For Li, the challenge he faced as part of the competition was not inventing a new product. It was improving upon a previous idea.

Li had previously developed a three-dimensional, chromatography paper-based microfluidic device that used DNA amplification to provide a rapid, low-cost and highly sensitive method to detect meningitis. Through his work with the Cardwell Collaborative, Li has moved to a glass-and-paper hybrid device about the size of a microscope slide. This makes it more robust and more suitable for large-scale fabrication. Li also continued to optimize the technique to render a more rapid diagnostic reading of meningitis and other infectious diseases such as pertussis.

“Right now, developing a point-of-care method to detect meningitis is one of the major goals for the World Health Organization (WHO),” Li said. “Meningitis is still a global, deadly disease. If you don’t detect it right away, the patient could die very quickly, in some cases within two days without treatment.”

The current detection method, Li said, involves a blood draw or a spinal tap and laboratory testing, a process that could take up to a week and allows the disease to continue to spread. Li said his device could detect the disease in less than an hour. That efficiency could prove vital in areas such as the so-called African meningitis belt, an area of sub-Saharan Africa where the incidence of meningitis is very high.

Li said the path to commercialization of the product would involve acquiring regulation approval from various agencies including the Food and Drug Administration, a process that would take at least a couple years. He said he is grateful for his participation in the MCA competition. If he does not win the chance to continue his work at the Cardwell Collaborative, he was still able to learn how to better market his research to target other sources of funding to continue his work.

“Winning would be great, of course. We want to get the product, the technology, to be commercialized and allow the application to benefit,” Li said. “But, we don’t just want to get our name in a publication. We want to make something that will be beneficial to the real world that will have an impact on global health.”