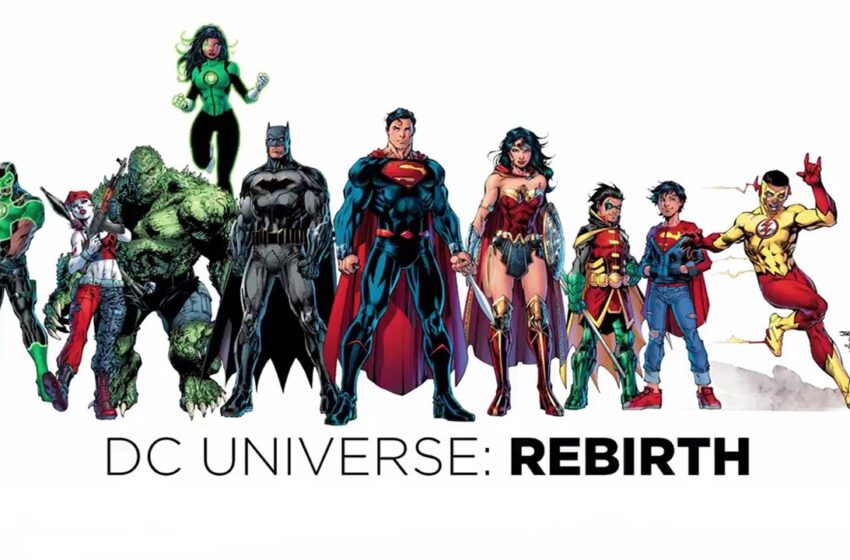 DC Rebirth is a 2016 relaunch by DC Comics of its entire line of ongoing monthly superhero comic books. The launching point is the end of The New 52 initiative (May 2016).

DC Rebirth is intended to restore the DC Universe to a form much like that prior to “Flashpoint”. It will incorporate the New 52 continuity as well as numerous other elements.

In January 2016 DC Comics co-publisher Dan DiDio and Jim Lee tweeted an image of a blue curtain with the word “Rebirth” on it, teasing the event. The following month DC announced its Rebirth initiative as a line-wide relaunch of its titles to begin in June 2016. It would kick off with an 80-page one-shot which was released on May 25, 2016.

As part of the Rebirth initiative Action Comics and Detective Comics will return to their previous numbering (#957 and #934 respectively). A number of existing titles will relaunch with new #1 issues. There will also be the release of several new titles.

Geoff Johns (narrator of this video) describes the 80-page one-shot as “re-laying the groundwork for DC’s future while celebrating the past and present. It’s not about throwing anything away. It’s quite the opposite.” Johns calls Rebirth more “in the same vein as Green Lantern: Rebirth and The Flash: Rebirth.

Some things alter and change but it’s more character-driven. It’s also more about revealing secrets and mysteries within the DC Universe about “Flashpoint” and The New 52 that are part of a bigger tapestry.” The Rebirth initiative will reintroduce concepts from pre-Flashpoint continuity, such as legacy, that were lost with The New 52 and build “on everything that’s been published since Action Comics #1 up thru The New 52.” Lee said that Johns “came up with this brilliant story [for the DC Universe: Rebirth Special] that basically allows us to seat the New 52 within the continuity that preceded it. So it really synchronizes and harmonizes pre-52 with New 52 continuity”.

Johns worked with each writing team and the editors for the titles to help refocus “on these characters, deconstructing them down to their core DNA and building out story arcs based on that DNA”. Two titles that were part of the initial announcement in February, Gotham Academy: Second Semester and Earth 2, were revealed to no longer be considered Rebirth titles. Instead these titles will be continuations of their New 52 titles.

Regarding the release of variant covers for titles, Lee said, “we’re only using specialty variants with comic book shops and variant covers in judicious ways. We’re not going to have a gazillion SKUs across the entire line. We find that at that point why publish a story inside at all. If you’re just going to build a business based on variant covers. We’re still using variant covers, but we’re actually using one variant cover artist for each book. And they’re going to be responsible for being the alternate cover artist on that book. And we’re only doing it on our top-selling books.”

With the release of DC Universe: Rebirth Special characters not seen during The New 52, including Wally West, Jackson Hyde/Aqualad, Ryan Choi and Doctor Fate, return to continuity. Other characters such as Ted Kord and Ray Palmer/Atom returned to their characterization from prior to Flashpoint. Wally West explains the in-universe cause of the reboot following Flashpoint was not due to Barry Allen attempting to fix the timelines. For unknown reasons Doctor Manhattan of Watchmen interfered and removed approximately 10 years from each character. This resulted in the younger age of heroes in The New 52 and the loss of legacy and previous relationships.

The Batman family of titles includes Batman, Detective Comics, Batgirl, Nightwing, All-Star Batman, and Batgirl and the Birds of Prey.