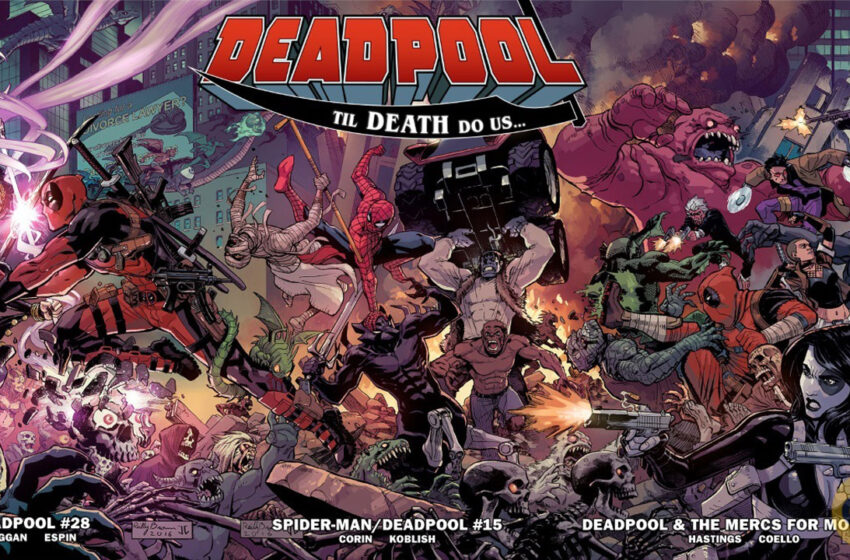 Deadpool got married? Yes, Wade Wilson actually tied the knot.  Who would say “I do” to Deadpool?  How about a succubus named Shiklah.  Long ago Shiklah and her family ruled over the monster world.

Vampires sought to overthrow them by starting a war that lasted over a century.  Shiklah’s father was distraught over his kingdom falling and the seeming deaths of his sons.  He decided to seal Shiklah away in a coffin until either the war ran its course or until she was to be wed.

Fast forward to present time.  Deadpool is hired by Dracula to bring Shiklah to him. He plans to marry her so he can take over her old lands and unite the monster world under his rule. Deadpool travels to the Arabian Peninsula and rescues Shiklah (sealed in a coffin) from a group of teleporting vampires could destroy it. Deadpool brought the coffin to Greece where he got into a fight with the Minotaur. As a result of the fight the coffin shattered and Shiklah was awakened along with her pet, Bug.

Shiklah repaid Deadpool’s service by attempting to absorb his life force by kissing him.  She failed due to Deadpool’s healing factor. In their journey they have lots of confrontations.  They end up fighting a Templar ghost, Blade, Hydra, and A.I.M. just to name a few.

During this trip they start to have feelings for each other. Once Shiklah and Deadpool returned to New York City they were married in a ceremony officiated by Nightcrawler.

The Marriage of Deadpool occurred in Deadpool #27.  That cover set a Guinness World Record for most comic characters on a single issue cover. Among the characters shown on the cover were popular heroes like Captain America, Thor, Hulk, Spider-man, the Fantastic Four, and the X-Men.

There were also some lesser known ones like Doop and Squirrel Girl.  Deadpool #27’s wraparound cover features 232 Marvel characters.  Guinness determined that 224 of those characters were “publicly familiar enough to qualify for the recognition”.

Deadpool and Shiklah on the outs

Less than two years after they were married, Deadpool and Shiklah are going to war in a new six-part crossover titled Deadpool: Til Death Do Us. The story-line will have two issues (each) of Deadpool, Spider-Man/Deadpool, and Deadpool & the Mercs For Money in March and April 2017.  In Deadpool: Til Death Do Us, Shiklah is declares war on humanity forcing Deadpool to choose sides.

“In the first chapter of this we see the encroachment on the Monster Metropolis from above, from the surface world. Humans and monsters are not great neighbors. At the end of a long series of incidents of poor behavior on both sides, Shiklah decides she’s had enough,” said Deadpool writer Gerry Duggan.

“Even though she is coming to terms with Deadpool not being a great husband, she is also beholden to her people, so this is very much an act of preservation in her mind for her kingdom. It also will force Deadpool to make some choices. Are you with the soft pink surface dwellers or are you with your wife and her citizens back down below?”