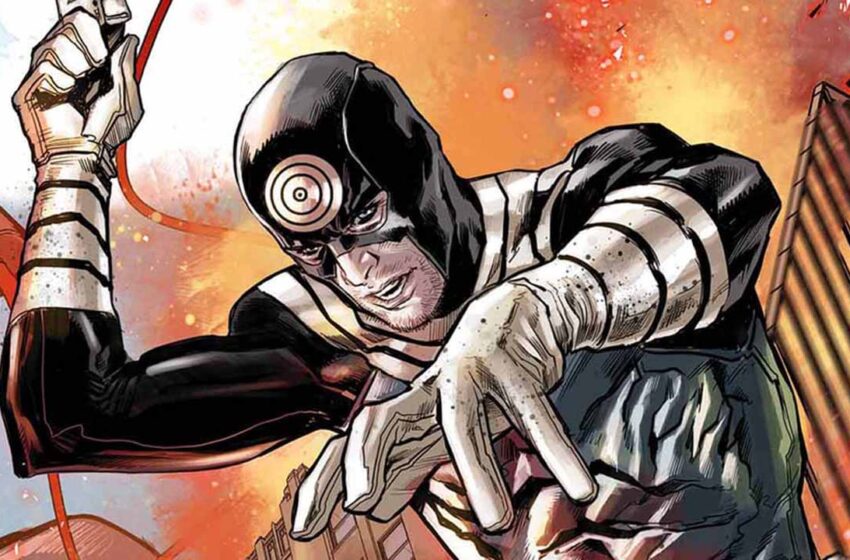 If the Netflix Daredevil series has done anything, it has made Matt Murdock a major player in the Marvel Universe again.

Daredevil has paved the way for other characters like Jessica Jones, Luke Cage, Punisher, and Iron Fist.

With these characters we also get their villains.  One of the big Daredevil villains will be getting his own Marvel Comics title starting in February 2017.  Bullseye has been one of Daredevil’s arch-nemesis for a long time.

Bullseye is a psychopathic assassin. He uses the opportunities afforded by his line of work to exercise his homicidal tendencies and to work out his own personal vendetta against Daredevil.

Although he possesses no superpowers, He is able to use almost any object as a lethal projectile.  Whether it is weapons like shuriken and sai or seemingly harmless objects like playing cards and pencils. His marksmanship is at a nearly supernatural level.  He has been known to miss moving targets.

Bullseye’s real name and origins are unknown. He has used the name “Benjamin Poindexter” on several occasions.  There are also instances where his name is given as “Lester”. Bullseye grew up in The Bronx. He lived with his brother and his abusive father. His brother’s main form of recreation was playing with rifles.  This lead Bullseye to become an expert shot.

Bullseye was placed in a foster home and became a baseball player in high school. He was an extremely talented pitcher and was offered a scholarship but opted to enter the minor leagues. After three games he was called up to play a sold-out Major League game. He was working on a no-hitter going into the bottom of the ninth with two outs.  He became bored and requested the coach pull him from the game. The coach insisted that he finish the game. The opposing team’s batter accused him of cowardice. Bullseye threw the ball at his head, killing him. As the ball made contact with the batter’s head, he said only one word: “Bullseye”. He was barred from professional baseball and convicted of manslaughter.

His cold demeanor and unique skills lead him to be recruited by the National Security Agency as an assassin. He was assigned to train Contras in Nicaragua.  Bullseye set up Paolo, his hapless Nicaraguan translator, as the leader of the new force controlling a smuggler’s airfield. Bullseye planned to invite several organized crime heads to the airfield to broker a new deal with him as Paolo’s supposed “right hand man”. He would take their money and disappear leaving Paolo to suffer the wrath of the Mafia, Russian Mafia, Yakuza, and various other criminal elements. Before the deal could be finalized the Punisher (Frank Castle) arrived.

Castle killed all the organized crime leaders in a fiery explosion from which Bullseye barely escaped. The two engaged in a fierce battle in which Bullseye was able to wound Punisher and evade / disable several of his weapons. Bullseye then used some blood-reddened mud to paint a bull’s-eye on his forehead mocking Castle’s inability to hit him. The fight concluded when Drug Enforcement Administration agents arrived and the Punisher fled. Bullseye turned himself in to the D.E.A. agents and was assigned to infiltrate the Kingpin’s criminal empire. He obtained a costume, fled yet again, and became one of the most dangerous hit-men in the world.

Debuting in February 2017, “Bullseye” will be written by Ed Brisson and feature art by Guillermo Sanna. The title will focus on the unrepentant killer attempting to maintain the balance between psychotic murderer and a cool and collected assassin while doing what he does best – killing anyone who happens to cross his path.

“[The series] won’t change the Bullseye we see,” Brisson explained. “He’s always going to be that same crazy dude who’s out to kill and isn’t going to be bothered about who’s in his way. We’re going to see a man who walks that balance between the two sides well. There is always going to be a very specific method to his madness.”

Though the title begins with Bullseye out of the country “on a suicide mission,” as always, all roads in his life lead to Hell’s Kitchen and Matt Murdock. To that end, Brisson assures that he’s been working with “Daredevil” writer Charles Soule to ensure their plans meld together smoothly, though the series’ initial plans call for some minor DD characters to play a role rather than the Man Without Fear himself.

Daredevil’s foes often view crime as a business, with murder viewed merely as a means to an end, with nothing personal about it. There is one Daredevil foe, however, who’s found a way to make his love for murder pay. Of course it helps that The Man Without Fear’s arch-enemy, the contract killer Bullseye, has the near-magical ability to weaponize almost anything.