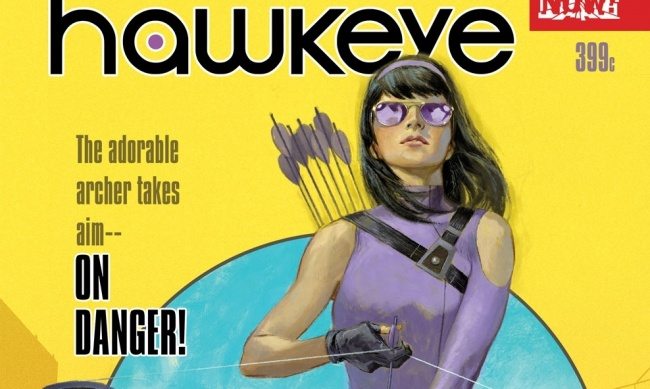 Most Hawkeye fans are aware of Kate Bishop. Kate appears alongside the original Hawkeye, Clint Barton, in his Hawkeye series after the Avengers vs. X-Men story-line.  They maintain a mentor/student relationship but regularly exhibit competitiveness with each other.

With Hawkeye (Clint Barton) still on the outs due to his killing Bruce Banner, Kate Bishop takes up the mantle of Hawkeye.  Kate had worked closely with Clint in the past taking out lower level street crime rather than being super-heroes.

Kate is highly skilled at archery, fencing, swordsmanship, jujitsu, boxing, and other forms of combat. She carries two battle staves similar to those once used by Mockingbird, a sword similar to the Swordsman’s, as well as Clint Barton’s bow and arrows.

Black Panther had also supplied her with trick arrows.

Kate was a civilian forcibly introduced to the Young Avengers in an early rescue attempt made by the team.  Her encounter with the young team led her to investigate them on her own.  She , followed them to Avengers headquarters.  She dresses in the gear of Mockingbird and Hawkeye.  She also grabs Swordsman’s sword and Black Widow’s belt.

When Kate first appears wearing Mockingbird’s mask Patriot jokingly refers to her as “Hawkingbird.” She invites herself to join the team after helping in their battle against Kang the Conqueror. She was subsequently confirmed as a member of the team.

After defeating Kang the Conqueror, Captain America and Iron Man ordered the team to break up. They refused to train the team without their parents’ consent. Kate Bishop still wanted to be a Young Avenger. Kate took the team to an abandoned warehouse previously owned by one of her father’s companies, Bishop Publishing.  She turned the warehouse into the team’s lair. Captain America told them to “never wear those uniforms again.” so she had new uniforms made.

Remember Hawkeye? No not that Hawkeye, our favorite Hawkeye, the chick who puts the hawk in Hawkeye, the butt-kicking hero who had to save the other Hawkeye’s butt all the time. Yup, you know her, it’s the dazzling Kate Bishop making her solo comics debut! Kate is heading west and returning to Los Angeles, with her bow and arrow and P.I. badge in tow. There are crimes to solve and she’s the best archer to handle ’em! The City of Angels has a new guardian angel.

The talented duo of Kelly Thompson (A-Force, Jem) and Leonardo Romero (Squadron Supreme, Doctor Strange) bring you a Kate Bishop like you’ve never seen her before, in a brand-new ongoing series that really hits the mark!