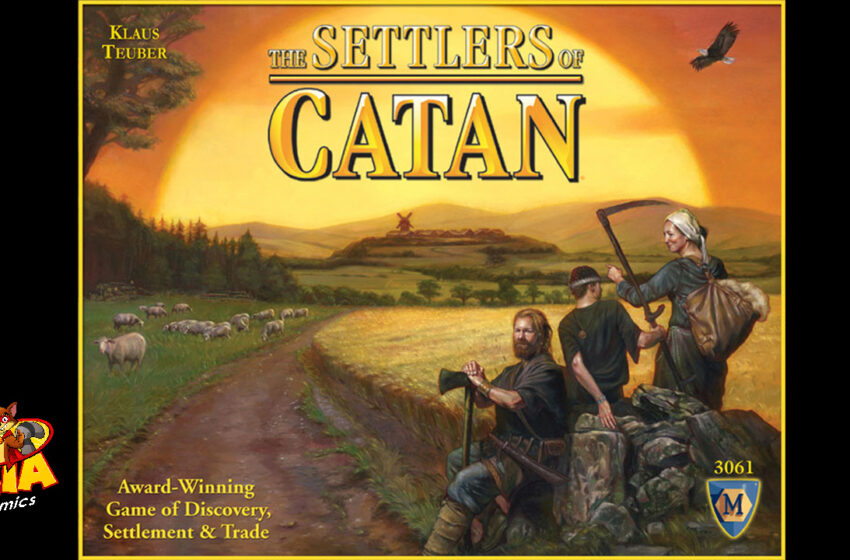 How to play Settlers of Catan

It is undeniable how popular board games have become recently. I’m not talking about the common staples like Monopoly, Risk, etc. I am referring to the outpouring of new, intelligent, and entertaining games that have been coming out over the past few years. One of the games that was at the forefront of that surge is Settlers of Catan. There have been numerous expansions/variations to this game. It still remains a must have in most serious board game players library.

Picture yourself in the era of discoveries: after a long voyage of great deprivation, your ships have finally reached the coast of an uncharted island. Its name shall be Catan! But you are not the only discoverer. Other fearless seafarers have also landed on the shores of Catan: the race to settle the island has begun!

The women and men of your expedition build the first two settlements. Fortunately, the land is rich in natural resources. You build roads and new settlements that eventually become cities. Will you succeed in gaining supremacy on Catan? Barter trade dominates the scene. Some resources you have in abundance, other resources are scarce. Ore for wool, brick for lumber – you trade according to what is needed for your current building projects. Proceed strategically! If you found your settlements in the right places and skillfully trade your resources, then the odds will be in your favor. But your opponents are smart too.

To begin the game, we build the game board with hexagonal terrain tiles. Catan is now born – a beautiful island with mountains, pastures, hills, fields, and forests, surrounded by the sea.
We each place two small houses on spaces where three of these terrain hexes meet, as our starting settlements.

And so it begins. I roll two dice. An “11”! Each terrain hex is marked with a die roll number. Each player who owns a settlement adjacent to a terrain hex marked with the number rolled receives a resource produced by this hex. Hills produce brick, forests produce lumber, mountains produce ore, fields produce grain, and pastures produce wool.

We use these resources to expand across Catan: we build roads and new settlements, or we upgrade our existing settlements to cities. For example, a road costs 1 brick and 1 lumber. If we do not have the necessary resources, we can acquire them by trading with our opponents.  Each settlement is worth 1 victory point and each city is worth 2 victory points. If you expand cleverly, you may be the first player to reach 10 victory points and thus win the game!

Catan has won multiple awards and is one of the most popular games in recent history due to its amazing ability to appeal to experienced gamers as well as those new to the hobby.

Die Siedler von Catan was originally published by Kosmos and has gone through multiple editions. It was licensed by Mayfair and has undergone four editions as The Settlers of Catan.

In 2015, it was formally renamed Catan to better represent itself as the core and base game of the Catan series. It has been re-published in two travel editions, portable edition, and compact edition, as a special gallery edition (replaced in 2009 with a family edition), as an anniversary wooden edition, as a deluxe 3D collector’s edition, in the basic Simply Catan, as a beginner version, and with an entirely new theme in Japan and Asia as Settlers of Catan: Rockman Edition. Numerous spin-offs and expansions have also been made for the game.

The Settlers of Catan is the original game in the Catan Series.