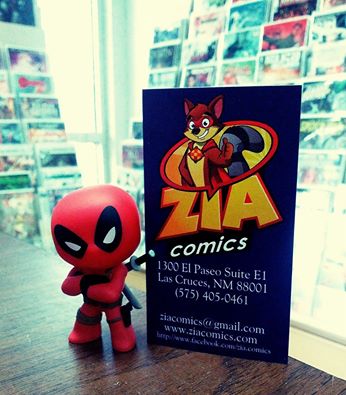 What’s up Zia Comics fans? For those who aren’t well versed in comic lore, Deadpool is the name. Talking and shooting is the game.

This is officially the start of The Summer of Deadpool and Friends! I, your lovely host, will be introducing you to some of Marvel’s biggest names, mine being the most important though. (Because it IS my party and I WILL cry if I want to.)

With the backing of Zia Comics and the writing prowess, or lack thereof, of a local heartthrob, (Yes, he actually wrote that about himself, Narcissism at its finest) I’m here to entertain you for all of five minutes of your day while your doing nothing productive but surfing this Facebook machine.

Not to mention I’ve been paid with a truck load of chimichangas to go on this little adventure. So put on some floaties and reload the comedic genius, its gonna get weird! See you soon nerds, tootles!

-James Romansky is a graduate from NMSU and has written many Lil’ Deadpool Diary Adventure Parodies for Zia Comics in Las Cruces New Mexico. He is the photographer and editor of the photos that correspond with each story of the series as well. A Native New Mexican, James predominantly writes short fiction loosely based off his experiences in the southwest.