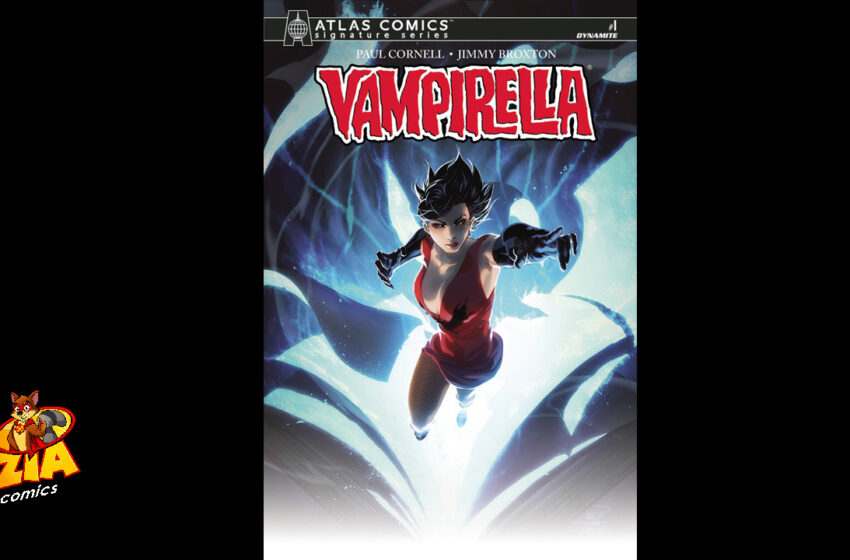 Vampirella History: Vampirella was originally presented as an inhabitant of the planet Drakulon.  On this planet blood flows in rivers.  This was good for her since she was part of a vampiric race, The Vampiri, that lives on blood.

Drakulon orbits twin suns that were causing droughts across the planet. The Vampiri are able to transform themselves into bats at will.  They sprout wings when required to fly.  They also possess superhuman physical attributes.

The story begins with the inhabitants of Drakulon dying slowly due to the drying up of its blood. When a spaceship from Earth crashes on the planet Vampirella is sent to investigate.  The astronauts attack her in fear.  Vampirella retaliates in self defense.

It is then she discovers the astronauts have blood in their veins. She manages to pilot the ship back to Earth where her adventures begin. Vampirella becomes a “good” vampire and devotes her energy to ridding our world of the evil kind. Evil vampires owe their existence to Dracula, who came from Drakulon but was corrupted by Chaos.

Vampirella has the typical powers of mythological vampires. She has super-strength and can move so fast that she appears as a blur of motion. She also has heightened senses allowing her to tell one’s emotional state through their scent, hear things imperceptible to humans, and see clearly in total darkness.

Her healing factor grants her great resilience and allows her to heal rapidly from her wounds.  It also makes her immune to Earthly illness and toxins. In addition to her supernatural abilities, Vampirella is a formidable hand-to-hand combatant.  She is very skilled with modern-day firearms.

After a sleep of over a thousand years, Vampirella finds herself back among the land of the living, but in a world far different than the one she remembers, where hope is laced with fear and blood has a far different taste.  And speaking of taste, finding an appropriate outfit for the era leads our fanged fatale to a chance encounter that will garner her not one but two potential allies.

From the Dynamite Press Release:

“Paul’s writing is tremendous, and we have been hoping to work with him on Vampirella for quite some time now,” says Dynamite CEO and Publisher, Nick Barrucci. “While Paul’s series is written in the classic style of the character, his take feels every bit as fresh as our 2016 relaunch. This new series is sure to be applauded by new readers and longtime fans alike!”

Paul Cornell is an English writer of novels, comic books and television, perhaps best known for his work on Doctor Who, dating back to 1990. Since that time, Cornell has written over ten Doctor Who novels, as well as multiple series for both DC and Marvel, as well as the widely celebrated Vertigo series, Saucer Country.

“I’m supremely jazzed to have the chance to work on Vampirella, a character with an incredibly rich history and a touchstone still for many readers today,” says Matt Idelson, Senior Editor. “Reuniting with Paul is always a total pleasure, and what he and artist Jimmy Broxton have cooked up speaks very much to all that’s great about the character, yet will come as a totally unexpected, wonderful surprise. I think this is going to greatly appeal to both longtime and new readers alike.”

Vampirella is a raven-haired heroine who remains, even after 45 years of publication, one of the comic industry’s most well known characters, due in no small part to Dynamite Entertainment. Since Vampirella’s very healthy resurgence in 2010, Dynamite has published three volumes of a monthly series, several miniseries and one-shot specials, and crossovers with multimedia brands and comic book peers. The Vampirella franchise is a haven for writers and artists with a penchant for the macabre.

Look for the newly designed Vampirella in your comic book store in February 2017.