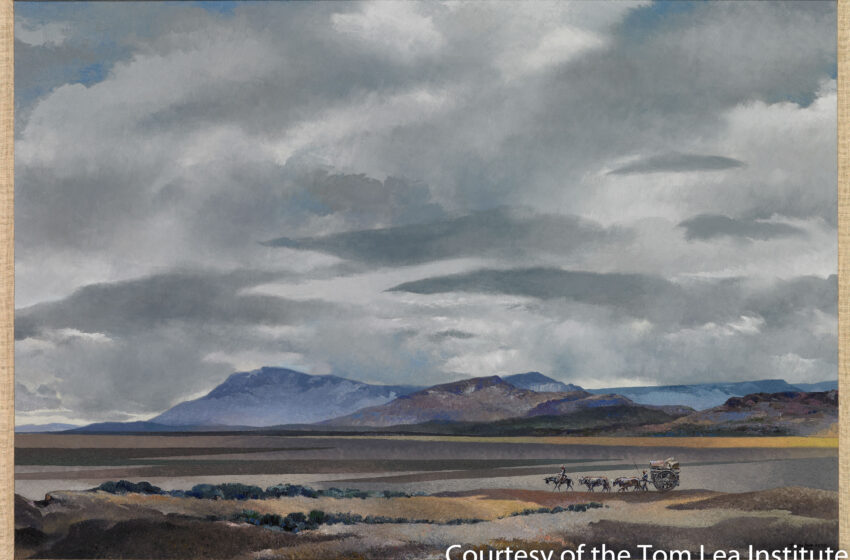 “His work reflects the landscape and the people of El Paso. You learn more about the Southwest, Texas and New Mexico simply by viewing his works and reading his books.”

El Paso has been the birthplace of so many people: Gene Roddenberry, the creator of Star Trek. Vikki Carr is from here and still lives here. Bobby Fuller is an El Paso son. Ara Celi, from American Beauty, is from here, as is Supreme Court Justice (ret) Sandra Day O’Connor.

The list goes on and on, yet only one has a month set aside to appreciate his life and works: Tom Lea.

About the piece at the El Paso Public Library, “I saw this painting more than once,” said Charles, “but I’ve never known who it was done by.” Charles has spent the last thirteen years in El Paso.

At the El Paso Museum of Art, I met a family, the Guzman’s. I spoke to them as they were walking through the collections. “I’ve heard the name,” Ruben said. “My daughter did a report on him last month, and that was when I connected the dots between the name and his art.”

“I like his style,” said Maribell. “The way he makes his paintings is how I want to paint. It’s the reason I did my report on him.”

Tom Lea is, according to Lisa M. Pugh, the director of the Tom Lea Institute, “a well known artist, a muralist, a portraitist, a war correspondent artist, as well as an author.”

Looking at the whole, known body of work by Tom Lea, he was prolific and thoughtful in his work. I’ve always like his work. Each piece tells a story, and not a single brush stroke is wasted.

“He became active as an artist,” says Lisa Pugh, “in high school.” Tom Lea attended El Paso High School and even did work in the Yearbook while he was there. After graduation, he went on to the Art Institute of Chicago.

After Tom left the Art Institute, he moved to Santa Fe where he worked as an illustrator, and on the WPA murals.

The WPA, or Work Projects Administration, was the largest of President Roosevelt’s New Deal agencies. Their goal was to employ
those who were unemployed to carry out public works projects, such as the construction of buildings, roads, and more. A much smaller part of the WPA was to hire writers, actors, and artists to create public works of art, as well as other literacy projects.

Being an avid reader, I asked what book one should read if they wanted an overview of Tom Lea and his work.

“The best books, if you are looking for an overview of Tom Lea and his works, there are three that come to mind,” began Lisa. “Two are works of fiction.”

The first one is Wonderful Country, which was later turned into a film. In fact, Tom Lea has a bit part in the movie as the barber. The other is Hands of Cantu. The latter book is about horsemanship in New Spain (Mexico).

“We had a speaker the other day, at Santa Fe, talking about his [Tom Lea’s) work in J. Frank Dobie’sbooks,” says Lisa. “That was her introduction to the Southwest. Just by looking at his illustrations and paintings she knew what the Southwest looked like.”

I can see that. Looking at the works of Tom Lea I can see the Southwest, I can see El Paso. I can imagine what life was like during his time, or even one-hundred years ago. Having read some of his writings, it’s the same. I can imagine I am there. I can feel the story move through me as if I were a part of it.

“It’s a unique landscape that we have here, and he was proud to call it home,” Lisa said. Back to Tom Lea Month.

Tom Lea Month runs through October. It is a month-long celebration of his work, art, and writings within the communities along the Tom Lea Trail. In June of this year, Gov. Greg Abbott signed the legislation that made Tom Lea Month the first artist named heritage trail in Texas.

Each person he encountered, each community he visited had its own story, its own history. Tom Lea wanted to make sure that was reflected in his works, be it a painting or a story he wrote.

“If you go to the post office in Seymour, Texas,” said Lisa, “you’ll see his post office mural, and it’s entitled the Comanches, and he focused on the horsemanship skills of Comanche warriors.”

Tom Lea based other works, paintings as well as writings on what he saw, witnessed or learned. The Tom Lea Institute, in addition to preserving the work of Mr. Lea, also works within the public schools.

“We have developed a curriculum, for grades four thru twelve, on various topics,” said Lisa Pugh. “The focus is always on understanding your regional, border history through artwork and literature. This gives the children another access point in learning about their community, and taking pride in their community.”

In addition to the curriculum, they give class tours of Tom Lea’s work in the Downtown area. “We learn almost as much from them [the children] as they do from us,” said Lisa. “Many of them have been downtown with their grandmothers, and hear the stories of where they shopped, where they had their first dates, walking along the Plaza.”

The history of our city is continuous, it joins us to everyone in the community, whether we know them or not.

I asked Lisa what her message would be, if she were shouting from the rooftops, “My message would be for El Pasoan’s to take a look at what we are doing. To look at our programs, come to our activities, to learn more about the fascinating place we live.”

“I hope people take pride in the heritage of this community, to look at it very carefully so that we can promote it to our friends.”

With everything we have lost in El Paso, and are currently losing- bits of our collective heritage, history, and past, I left Lisa with one question. I wanted to know what happens if we forget our history, marginalize it, or if we forget artists like Tom Lea.

“I think something is lost,” she answered. “When you lose that continuity across time to understand that history didn’t just happen yesterday that it happened 50 years ago, 100 years ago. For those born in this community today, there is a chance that Tom Lea knew your great- great-grandparents.”

Continue in browser
Gallery+Story: City, Residents Honor the Life and Work of Tom Lea
To install tap Add to Home Screen
Add to Home Screen
El Paso Herald Post
Get our web app. It won't take up space on your phone.
Install
See this post in...