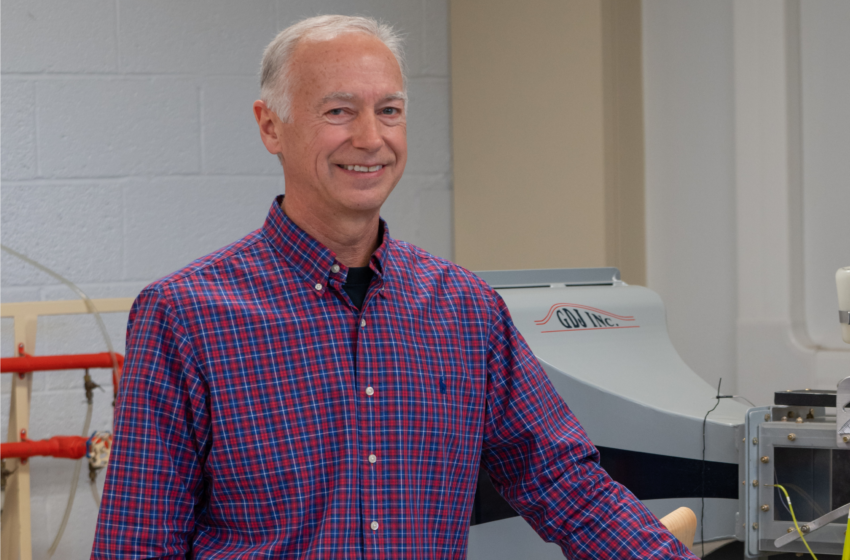 Terry Armstrong had plenty of aviation and military leadership achievements during the course of his 21-year career in the U.S. Air Force. The retired Lt. Col. and F-15 fighter pilot is now a college assistant professor of aerospace engineering at NMSU and helping students on the path to their own achievements.

Armstrong’s first assignment was at Sheppard AFB in Texas for Euro-NATO Joint Jet Pilot Training, multi-national combat mission training required for all NATO allied pilots. A Distinguished Graduate from the program, Armstrong was then chosen to be T-38 supersonic jet trainer instructor and later an F-15 tactical fighter jet instructor.

Armstrong gained some teaching perspective from high school math classes and later from the military.

“I always sat in math class and thought there was a better way to teach. It gave me an opportunity to see what doesn’t work. I use what the military calls BLUF, bottom line up-front. Math is taught backward. It’s always difficult derivations with no explanation of what it is used for. I begin with how the result contributes to what you are trying to do and then go back to the derivation.”

A U.S. Air Force Academy graduate with a bachelor of engineering science, Armstrong realized that to advance, he needed a graduate degree. He earned a master of aeronautical science degree from Embry-Riddle University through night classes while on active duty.
As a combat pilot, Armstrong flew missions over the skies of Iraq, enforcing the no-fly zone shortly after the first Gulf War.

Armstrong’s assignments grew in leadership responsibility. Among his assignments, he served as Commander of Detachment 1, 85th Test and Evaluation Squadron at Tyndall AFB in Florida where he was responsible for 43 personnel, a $2.8M budget and F-15 and F-16 avionics test programs.

He next went to Ramstein AB in Germany as Chief of Flight Safety for U.S. Air Forces in Europe. There he was responsible for flight safety programs in 30 European countries.

His final military destination was Kirtland AFB in Albuquerque as Deputy Director/Director of the Air Force Operations Test and Evaluation Center. There he was responsible for writing a broad spectrum of classified test programs such as preparing the F-35 fighter aircraft for deployment and ensure that the aircraft could perform what it was designed to do in the field.

Along his military path, he received a number of awards: three T-38 awards and seven F-15 awards. He also received a Top Gun award from the Order of the Daedalians, named for World War 11 flying ace Major Herschel H. Green.

Armstrong retired in 2006 with more than 4,000 flight hours. The Oregon native made the Albuquerque area his home. He built his lifelong interest of photography into a business (“Weddings are like being in a war zone”) and took up astro-photography, thanks to New Mexico’s clear skies. He also built a kit plane which he sometimes uses to commute to Las Cruces. “It’s not the same as the military jets,” he said, “but it’s still fun.”

Always looking for a challenge, Armstrong decided to return to school, becoming one of the first applicants to NMSU’s new Ph.D. program in aerospace engineering. Graduating in fall 2015, he joined the faculty at NMSU in spring 2016 and began applying his unique method of teaching using his military experiences as illustrative examples of what the math leads to.

One such example is explaining what it was like to fly an F-15 at 9gs.

“Everything weighs nine times greater, such that a 170 lb. body becomes more than 1500 lbs. Blood, likewise, becomes heavy, pooling at lower extremities, breaking small capillaries to create little red dots we called ‘g-measles.’ There’s a simple equation to use, but it’s more powerful to work the calculus.” He uses the optimal velocity, 9g radial acceleration and the turn radius for an F-15 to show the physics of how forces behave. “It’s all there, and it works together powerfully to teach potentially difficult concepts.”

This lesson includes a frightening video of himself in a centrifuge designed to train pilots to face the rigors of the experience. The physical demands in training were challenging enough, not to mention what it might have been like flying a jet and maneuvering in close combat.
“It was difficult, but exhilarating, like no other roller-coaster you might imagine. It’s just one of the aircraft’s incredible attributes, allowing it to remain undefeated in aerial combat, outmaneuvering opponents.”

With examples like this, it’s no wonder that he has received accolades for his teaching. Armstrong received the 2018 Bromilow Teaching Excellence and the 2020 Roush Award for Teaching based on student feedback, for which he routinely ranks among the highest.
The future, he said, looks bright for aerospace engineering students: “Funding for aerospace is increasing significantly right now. The opportunities are as grand as they have been in quite a while.”