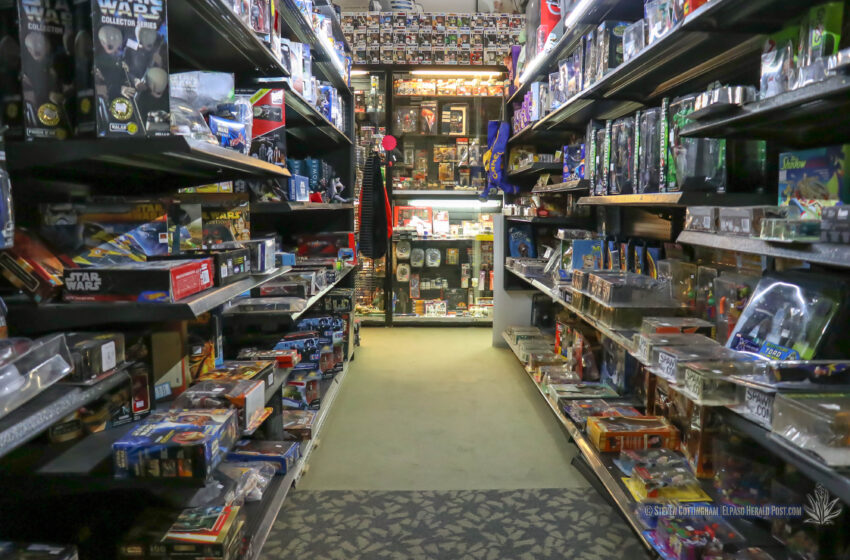 If there is one thing that El Paso has, it’s these neat little secret treasures that are relatively unknown. I found just one such treasure on the Upper West Side.

What did I find? A cool toy store.

At 6020 Doniphan you find a collection of reddish buildings. They don’t seem like much, until you pull in and start going through the shops there. You’ll mostly find antique shops and a furniture shop, then, in space B1 you will find Dave n Ale’s Toys.

I just had to talk to the owners of this toy store. So, I went back and talked with Dave.

“We’ve been in business here, on Doniphan, for the last seven-and-a-half years,” he says. In their “little” shop, just over 3,000 square feet packed with toys.

You’ll find everything there: Dr Who, Star Wars, Nightmare Before Christmas, horror-themed toys. No matter what you are looking for, it’s in that shop!

“I go into the toy business because I started out, my collection is cars,” says Dave. “I collect the 1/43rd [scale], mostly very refined quality cars from Italy.”

After some time, Dave discovered that he was buying the same things repeatedly. (Writer’s note – It’s a feeling I can relate to, you should see how many of the same film cameras I’ve bought over time, not realizing I already had it in my collection).

“So, I had to turn around and get rid of the ones I had, extra,” says Dave.

He started selling on eBay. From there, he branched out into other things, other cars and models. Eventually, his wife began to collect horror-themed toys. It was from this, the collecting and selling that the shop was first born.

“We started going into one of the small stores here,” he says. “We took up a small place in their store.”

Over time, Dave and Ale’s store began to grow. More toys were coming in and going out. Eventually, they were occupying over half of that one shop, so they decided to move into their space. Walking through their shop now, as full of toys as it is, it’s an adventure, and at the time a walk back into my childhood.

There are so many toys at Dave N Ale’s: Superheroes, monsters, horror scenes, cars, motorcycles, old signs from shops long gone, models and more. For me, the fun stuff is in the back of the shop. I like the horror toys/scenes and science-fiction toys. They are the most amazing to me.

I asked Dave what the best thing is about owning a toy store.

“You get first shot at everything that comes in the door,” he says laughing. “There are things that we like. When we run into them, of course, obviously we’re going to go after them.” They are also able to attend dealer only auctions. Those incredible sales where you can find almost anything and everything.

What’s the one thing he would like to see come through his door?

“I wish I had the clientele to bring in the high-quality 1/18th and 1/24th cars. It’s hard to carry that sort of item here.”

He does have some museum quality firetrucks that are along that scale. They are amazing pieces, but not the type of toy you would want to play with.

The strangest thing that’s ever happened at the store is a woman who came in with a bunch of M&M candy dispensers and toys.

“Because they were out of the box we decided that we didn’t want to deal with it. She turned around and walked out the door,” says Dave. In the end, they held them for a while, and when she didn’t come back, they got rid of it all.

With so many stores, like Toy’s ‘R Us going out of business, this local store is an amazing find.

It’s good, to have a home owned shop like this in town. Why not take some time, take the trip and visit Dave n Ale’s .