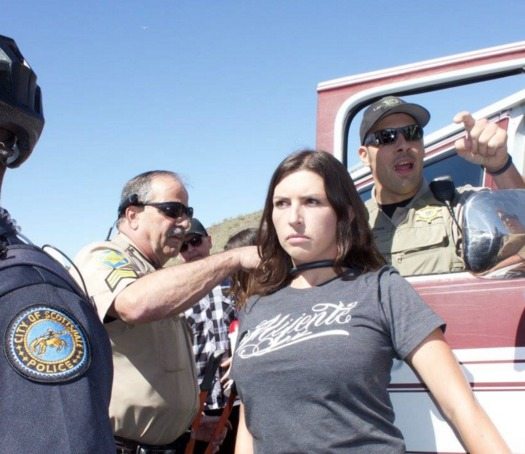 PHOENIX – A Phoenix woman arrested on Saturday as part of a protest against presidential candidate Donald Trump claims she was racially profiled by officials at the Maricopa County Jail because she has a Latino surname.

Jacinta Gonzalez said an arraignment court judge ordered she be turned over to U.S. Immigration and Customs Enforcement officials, although two white men arrested with her were released. Gonzalez, who is an American citizen, claims in a video statement posted on Sunday that she was not treated equally.

“Yesterday when we were arrested, I know that the two colleagues I was arrested with were released,” said Gonzalez. “But because my last name is Gonzalez, I was immediately questioned by ICE and placed on a detainer.

After they were let go and were able to go home, I was transferred to immigration custody.” Gonzalez, a field organizer for the Latino rights group Mijente, said she was arrested after she chained herself to a vehicle to block traffic headed to a Trump political rally. She was charged with blocking a public thoroughfare.

A spokesman for the Maricopa County Sheriff’s Office could not confirm details of her arrest and detention, but said everyone booked into the jail is routinely interview by ICE. Gonzales said she was part of a multiracial coalition of activists peacefully protesting the Trump rally, angry over the candidate’s stance against immigrants.

“The same words that Trump says over and over are starting to get into our state legislatures,” she said. “Arizona, Georgia, Louisiana, Pennsylvania – all of these states are seeing anti-immigrant bills, like SB 1070 so many years back, just because Trump is opening up that space.”

The Maricopa County Sheriff’s Office and Sheriff Joe Arpaio are under a federal court order to refrain from racial profiling after rights groups filed suit over immigration raids by the sheriff’s office. Arpaio has endorsed Trump for president.