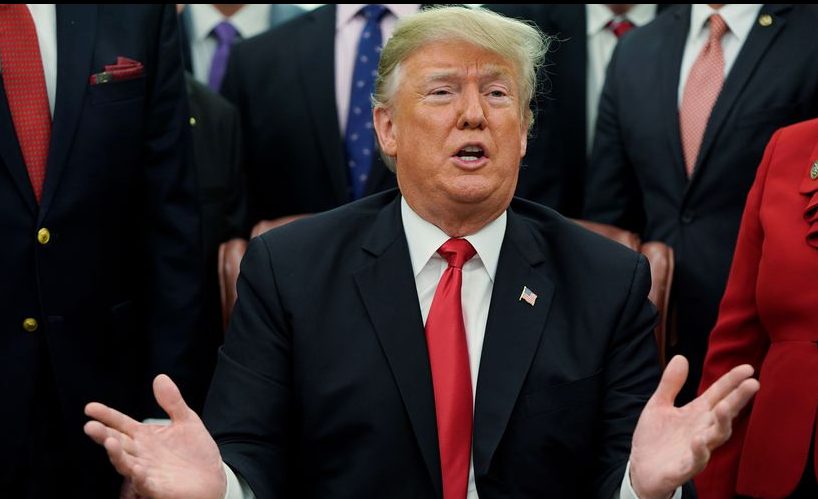 President Trump on Friday threatened to use emergency powers to build a wall along the U.S.-Mexico border, a move that would defy a Congress that — amid Democratic opposition — has thus far refused to allocate any new money for a border wall.

The government has been partially shut down since Dec. 22, as Trump has demanded any budget deal include more than $5 billion in wall funding.

Trump told congressional leaders Friday he would keep the federal government closed for “months or even years” amid a dispute over border wall funding, as the White House scrambled to unify the GOP behind Trump while some Republicans showed impatience with the now two-week old shutdown.

“He resisted,” Schumer said. “In fact, he said he’d keep the government closed for a very long period of time, months or even years.”

Addressing reporters a short time later in the Rose Garden, Trump confirmed that he’d suggested the shutdown could last for years — although he said he hoped it wouldn’t.

Trump said that, despite the Democrats’ characterization of the meeting as contentious, in his view it had been productive. “I thought it was really a very, very good meeting,” Trump said. “We’re all on the same path in terms of wanting to get government open.”

But Trump strengthened his rhetoric in his demands for more than $5 billion to build a wall along the southern border, saying it must be built out of concrete or steel. Democrats have rejected providing any new funding for a border wall.

“The southern border is a dangerous horrible disaster,” Trump said. And contrary to Democrats’ demands, he said the government would stay shut down until the issue was resolved.

“We won’t be opening it until it’s solved,” Trump said.

Trump promised during his campaign and earlier in his presidency that Mexico would pay for the wall. That has not happened.

Trump said he’d designated a working group led by Vice President Pence that would be meeting with congressional staff over the weekend to come up with a solution to the impasse.

The developments came as the administration worked behind the scenes to shore up support for Trump’s wall demand.

Pence called about a half-dozen House Republicans late Thursday to urge them to vote against measures that would reopen the government without new wall funding, amid White House worries that broad GOP defections would give the Democratic effort bipartisan backing.

Two Republican officials confirmed the calls, speaking on the condition of anonymity to divulge the private communications.

Ultimately, just five House GOP lawmakers voted with Democrats on a spending bill that would operate the Department of Homeland Security until Feb. 8, and seven Republicans supported separate legislation that would reopen the rest of the federal government through Sept. 30. GOP officials feared the defections could have been much higher had the administration not gotten directly involved.

Pence’s efforts reflect a growing anxiety among congressional Republicans over the two-week shutdown that has halted paychecks for 800,000 federal workers but shown no signs of ending anytime soon — trapping GOP lawmakers between the president’s push to fund his signature campaign promise and the shutdown’s spreading consequences.

Congress also adjourned until Tuesday, making Wednesday the earliest the federal government can reopen — barring a major breakthrough between the administration and Congress. At that point, the partial shutdown would have lasted 18 days, which would make it the second-longest shutdown in history.

Pence’s outreach centered primarily on moderate members and those who hail from the northeast — some who ended up voting for the bills, and others who didn’t. The vice president’s pitch to Republicans centered on two main points: The country needs funding for a wall, and Congress shouldn’t kick the can to February, when the stopgap funding for DHS would have expired under the Democratic strategy.

The vice president also pointed to language in the funding bill passed late Thursday that would reverse the so-called Mexico City policy, which denies U.S. assistance to foreign groups that offer or promote abortions. That provision was included in the version of the spending bill passed unanimously by the Republican-led Senate Appropriations Committee last year, which Democrats are now using to try to end the partial shutdown.

Before the leadership arrived at the White House, Trump sent a letter to all members of Congress urging them to pass not just legislation funding a border wall — or a “physical barrier” — but revisions to statutes and legal settlements that restrict detention of migrant children.

“Americans have endured decades of broken promises on illegal immigration,” Trump wrote in the letter to lawmakers. “Now, is the time for both parties to rise above the partisan discord, to set aside political convenience, and to put the national interest first.”

Yet Republicans have struggled to stay unified in the face of the shutdown, provoked by a clash between Trump and congressional Democrats over the amount of border wall funding the president has demanded from Congress.

Sen. Cory Gardner (R-Colo.), who is up for reelection next year in a state Hillary Clinton won in 2016, has called on Congress to pass spending bills to reopen the government, even if they don’t contain Trump’s desired level of border wall money. Sen. Susan Collins (R-Maine), a moderate who herself is on the ballot in November 2020 in a blue state, has also argued that legislation that would fund other parts of the government such as the departments of Transportation and Housing and Urban Development shouldn’t be held hostage to disputes over the wall.

Meanwhile, their leader, Senate Majority Leader Mitch McConnell (R-Ky.), has largely stayed on the sidelines, leaving it to Pelosi and Schumer to resolve the wall dispute with Trump.

McConnell was not present when Trump and other Republican lawmakers appeared outside the White House following Friday’s meeting. Aides to McConnell insisted they were not aware of the news conference.

McConnell was frustrated about Trump reversing himself on a short-term funding bill last month — legislation Republicans thought the president would sign — that would have kept the government open. And the top Senate Republican complained to allies about how unreliable the president was to negotiate with, as well as how the president listened to what McConnell deemed as unproductive forces.

Schumer has sought to involve McConnell more, telling White House senior adviser Jared Kushner in a recent meeting that McConnell needed to be a more active participant. But McConnell has told advisers and other senators that he does not feel the pressure or the heat to get more involved, and that his members are not currently itching for the shutdown to end.

“He’s the leader of the Senate. Part of this shutdown,” Schumer told The Washington Post in a brief interview Thursday. “When he just tosses the ball over to Trump, he’s somewhat complicit in the shutdown because Trump is organizing it, Trump is the impetus for it and McConnell is going along.”

Josh Holmes, a McConnell adviser, said he saw his main role as keeping the caucus together.

“He knows exactly where the leverage points are on negotiations like this. He’s certainly not going to provide Democrats with an opportunity to exploit Republican divisions,” Holmes said. “So he’s going to provide a unified front here to get the president the best deal he can.”