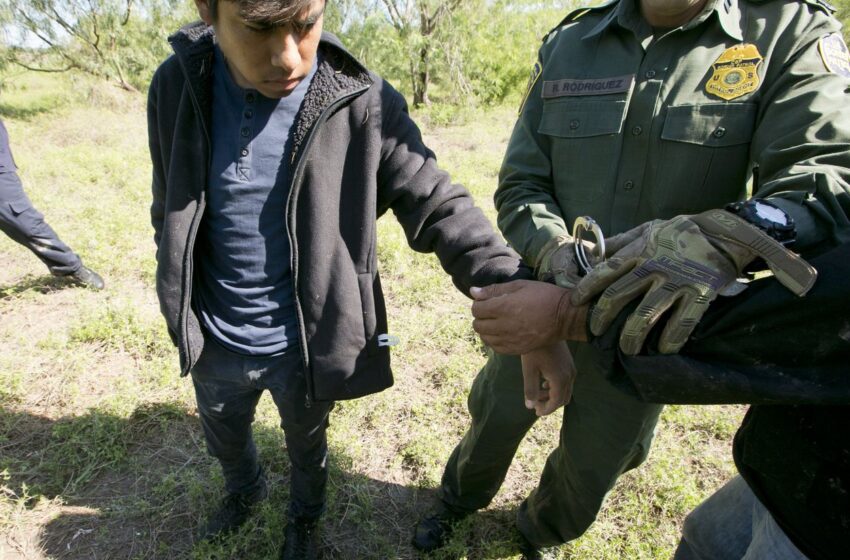 President Trump on Tuesday signaled plans to escalate a crackdown on illegal immigration, announcing that the U.S. military will be sent to guard the U.S.-Mexico border and threatening foreign aid to Honduras.

For the third straight day, Trump seized on coverage of a “caravan” of 1,000 migrants, primarily from Honduras, to call for tougher immigration policies and warn of what he called “weak” border security.

But the prospect sending military personnel to the southern border, as well as cutting off foreign aid, added a new dimension to Trump’s immigration strategy that so far had centered on threats to walk away from the North American Free Trade Agreement and pressuring Congress to send him funding for a border wall.

“We are going to be guarding our border with our military. That’s a big step,” Trump said Tuesday during a meeting with the leaders of three Baltic nations. “We cannot have people flowing into our country illegally, disappearing, and by the way, never showing up for court.”

Later at a news conference with these leaders, Trump said he would soon meet with Defense Secretary Jim Mattis to discuss having the U.S. military deployed to the border with Mexico.

“I think it is something we have to do,” Trump said.

Deploying troops to the border is not unprecedented. The Obama administration sent 1,200 National Guard troops to the southern border in 2010 to assist Border Patrol and immigration officials amid rising concerns about drug trafficking.

In 2014, then-Texas Gov. Rick Perry said he would dispatch as many as 1,000 National Guard troops to the southern border as the country faced an influx of migrant children and families from Central America. Perry is now Trump’s energy secretary.

Trump floated the threat about foreign aid to Honduras in a tweet early Tuesday morning as he continued to complain about the “caravan” moving through Mexico.

“The caravan doesn’t irritate me, the caravan makes me very sad that this could happen to the United States,” Trump told reporters during his meeting with the Baltic leaders.

The “caravan” — an annual event that is meant to draw attention to the refugee crisis in Central America — has spurred new calls from Trump for an immigration crackdown, particularly funding for a U.S.-Mexico border wall that has eluded him. Conservative media outlets have has focused on the caravan in recent days.

“The big Caravan of People from Honduras, now coming across Mexico and heading to our “Weak Laws” Border, had better be stopped before it gets there,” Trump tweeted shortly before 7 a.m. Tuesday. “Cash cow NAFTA is in play, as is foreign aid to Honduras and the countries that allow this to happen. Congress MUST ACT NOW!”

The Mexican government took steps late Monday to break up the caravan, registering the migrants and saying that some would be asked to leave the country while others would receive humanitarian assistance. Mexico’s Interior Ministry said Monday that “under no circumstances does the government of Mexico promote irregular migration.”

Honduras received about $127.5 million in aid from the United States in fiscal 2016, according to data from the U.S. Agency for International Development. Congress is in a two-week recess.

He referred to the caravan in tweets Monday night, accusing Democrats of allowing “open borders, drugs and crime” while deriding U.S. immigration laws as an “Obama joke.”

“Honduras, Mexico and many other countries that the U.S. is very generous to, sends many of their people to our country through our WEAK IMMIGRATION POLICIES. Caravans are heading here. Must pass tough laws and build the WALL. Democrats allow open borders, drugs and crime!”

Meanwhile, White House officials are preparing new proposals that they say would close “loopholes” in U.S. immigration laws. Separately, the Department of Homeland Security is pushing for the end of the “catch and release” practice, which allows undocumented immigrants who have been apprehended to be released while they await their hearings.

Trump’s new immigration threats were made in tweets early Tuesday that included another defense of Sinclair Broadcasting Group, the largest network of local television stations in the country. Sinclair has recently faced a backlash after its news anchors were ordered to read a uniform script decrying “biased and false news” and criticizing other journalists for using their platforms to “push their own personal bias.”

“The Fake News Networks, those that knowingly have a sick and biased AGENDA, are worried about the competition and quality of Sinclair Broadcast,” Trump tweeted. “The ‘Fakers’ at CNN, NBC, ABC & CBS have done so much dishonest reporting that they should only be allowed to get awards for fiction!”

Trump leveled another attack at CNN in a separate tweet that misspelled the name of the cable network’s head, Jeff Zucker, and charged that its journalists had to abide by an anti-Trump test.

CNN immediately pushed back: “Once again, false. The personal political beliefs of CNN’s employees are of no interest to us. Their pursuit of the truth is our only concern. Also, Jeff’s last name is spelled Z-U-C-K-E-R. Those are the facts. #FactsFirst.”

And in his fourth tweet of the morning, the president touted his ratings in recent polling from Rasmussen Reports, whose figures tend to favor Republicans, and noted that his numbers were “higher than ‘Cheatin’ Obama at the same time in his Administration.”