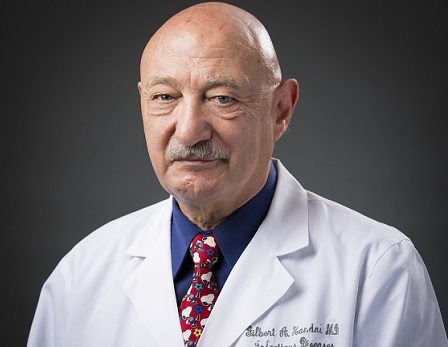 “Dr. Handal has an impressive track record at TTUHSC El Paso and a heart to serve the community — no matter what obstacles are in the way,” said TTUHSC El Paso President Richard Lange, M.D., M.B.A. “I have no doubt that he will serve as an excellent president and advocate for El Paso’s medical community.”

The pediatrician was elected president on the basis of numerous merits, including having served on a several councils within the society. In addition to his new role in the EPCMS, Dr. Handal is the Marta Cuellar-Acuña Chair for Child Advocacy in TTUHSC El Paso’s Department of Pediatrics and founding chair of the institution’s Global Health Committee — now known as the International Affairs Council.

“I am very excited to have Dr. Handal take over the reins of the El Paso County Medical Society,” said David Mansfield, M.D., the former President of the EPCMS. “His commitment to the El Paso community has been exemplary in the past and will continue going forward; he represents the ultimate bridge between the so-called ‘town and gown’ divide.”

Dr. Handal has several goals as the EPCMS president, including 1) to dramatically increase local physicians’ membership rates in both the EPCMS and the Texas Medical Association (TMA); 2) to increase PLFSOM faculty involvement in these two organizations so that TTUHSC El Paso serves as an example to other medical schools across Texas; 3) to increase local physicians’ overall involvement in specialty societies (e.g., the El Paso Pediatric Society); and 4) to enhance collaboration between TTUHSC El Paso physicians and local private practice physicians.

Dr. Handal will officially be inducted as president of the EPCMS at the Doubletree Hotel at 7:30 p.m. Wednesday, Feb. 1. The ceremony will be keynoted by Paul L. Foster, executive chairman of Western Refining.