Commonly known as stomach paralysis, gastroparesis is a condition that affects the muscles of the stomach, preventing it from properly emptying.

The group learned that combining two procedures to the stomach during one surgery significantly improved the condition of patients with severe gastroparesis.

After the surgery, patients experienced less nausea and could properly empty their stomachs without complications.

“At the end of the day, we can save the amount of time patients spend in a hospital and ensure a better future for them,” said Irene Sarosiek, M.D., professor and director of neurostimulation research. “Frequent hospitalizations for severe nausea and vomiting were reduced over the next three months post-operative. Symptoms were alleviated, their quality of life improved, health care costs were lowered and hope was restored to the patients. This kind of outcome is priceless.”

This “gastric neurostimulator” sends electrical pulses through the leads to electrodes sutured into the wall of the stomach. That process transmits a signal to the brain and reduces the frequency of nausea and vomiting.

During the trial, the combined procedure was done on 27 patients, including 22 with diabetes, with six on dialysis. The trial was led by Dr. Sarosiek and Richard McCallum, M.D., professor and director of the TTUHSC El Paso Center for Neurogastroenterology and GI Motility. 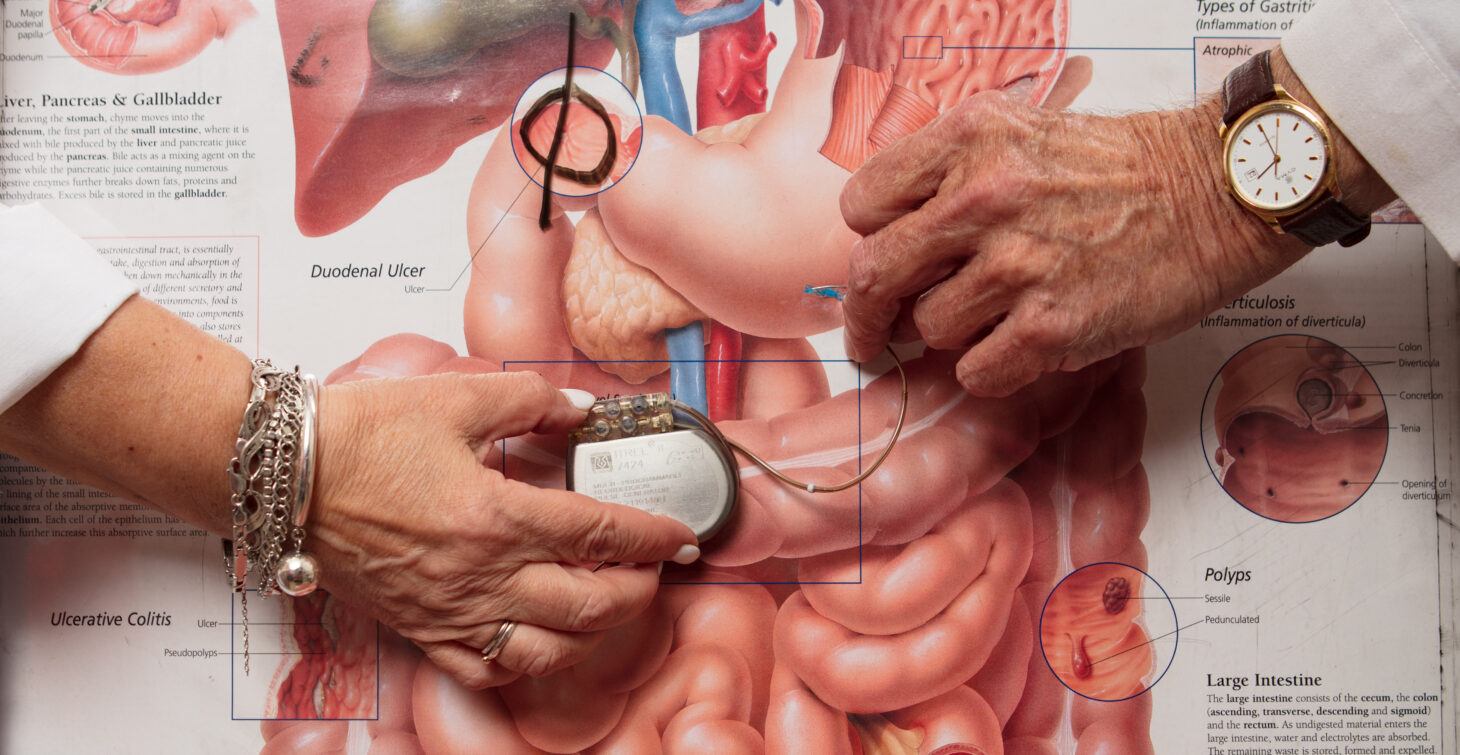 Every patient received both procedures, but half had their gastric electrical stimulation device inactive for the first three months.

Because it was a double-blind randomized trial, neither the patient nor the physicians knew if the device was active until after the trial.

Half of the patients who had their device active for the first 3 months experienced significantly less vomiting than those who were not activated.

When the device was activated three months later for the remaining patients, they also reported significantly less symptoms with a mean of 70-80% reduction in overall symptoms.

“This is something we’ve been working on since January 2017. It was a demanding and challenging project,” Dr. Sarosiek said. “But we were able to help our patients and the research may lead to quality of life improvements for countless patients who suffer from gastroparesis.”

The TTUHSC El Paso team presented their findings in May during Digestive Disease Week, described as the world’s premier meeting for physicians and researchers in the fields of gastroenterology, hepatology, endoscopy and gastrointestinal surgery. They were chosen to be one of the signature lectures by the American Gastroenterological Association Council, when only about 1% of all submitted abstracts receive this invitation.

“We had a few questions and discussions afterward, but this is one of the rare situations where not having a lot of questions was a good thing because that means they listened and understood that this is the real deal,” Dr. McCallum said. “It’s hard to argue with this data.”

Dr. McCallum said other institutes, including Temple University and the University of Louisville, are doing similar practices. However, thanks to the TTUHSC El Paso study, he believes the combined procedure will become the “gold standard” for treating severe gastroparesis with surgery.

“I think within five years it could be the widely-used state-of-the-art method to treat gastroparesis,” Dr. McCallum said. “Before that can happen, other researchers need to be able to repeat the study and confirm the results as we have. Someone is bound to repeat the study and we wish them luck, because it takes a great amount of time and effort, but it is worth it.”

For our complete coverage of TTUHSC El Paso, click here.