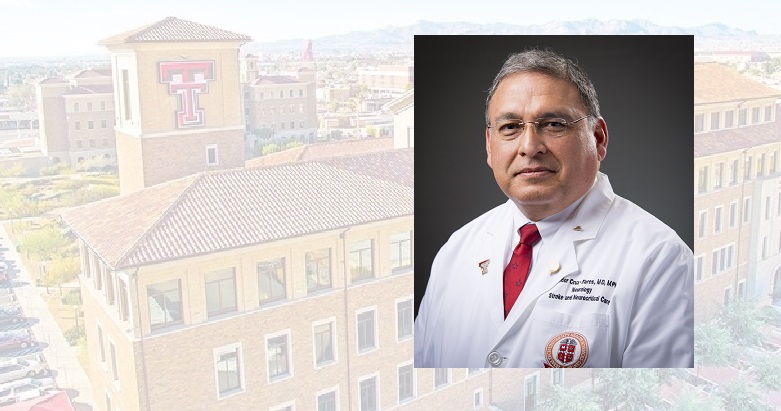 “The program isn’t the typical type of training where you attend lectures on how to be a leader, it’s a program geared toward reflection, introspection and looking at your values,” Dr. Cruz-Flores said. “You do attend some lectures, or talks, but the one-on-one sessions were key.”

The training, which began in early 2020, is designed to provide the skills and expertise necessary to enrich the careers of future and current leaders in the field of neurology. Only neurologists from underrepresented groups, who have completed residency and either secured a faculty position or completed a fellowship are eligible for the program.

“Over the course of this multi-month intensive program, Dr. Cruz-Flores worked extensively on developing and honing the ways in which he can best lead confidently and authentically, advocate for change and empower others to do the same.”

Proud to represent TTUHSC El Paso, Dr. Cruz-Flores said he enjoyed the discussions and one-on-one mentoring provided by AAN. As a departmental leader, he originally thought the program was only tailored for future leaders, but even as a current chairman, he benefitted from the program.

“The program isn’t the typical type of training where you attend lectures on how to be a leader, it’s a program geared toward reflection, introspection and looking at your values,” Dr. Cruz-Flores said. “You do attend some lectures, or talks, but the one-on-one sessions were key.”

Most importantly, Dr. Cruz-Flores wants to apply what he learned to his roles at both TTUHSC El Paso and Texas Tech Physicians of El Paso to help influence other health care heroes on their paths to becoming leaders.

“This is an important developing program for people of diverse ethnic and racial groups,” Dr. Cruz-Flores said. “I plan to bring the training back to campus and better serve as a role model to others in minority or diverse groups. When they see someone like themselves in a leadership position, it becomes easier to envision the same future for their own careers.”

TTUHSC El Paso is one of only two health sciences centers designated as Title V Hispanic-Serving Institutions – and the only one on the U.S.-Mexico border — preparing the next generation of health care heroes, with 48% of students identifying as Hispanic. The university serves 108 counties in West Texas that have been historically underserved and understudied.