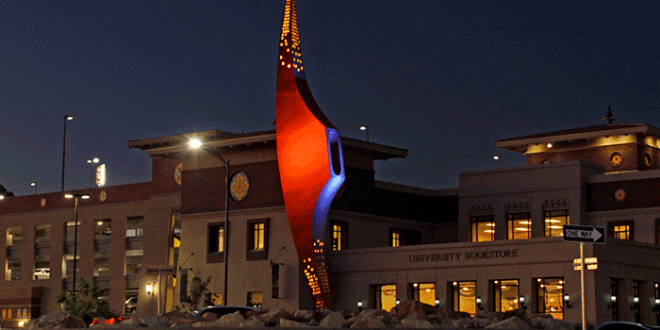 Twenty-three past and present UTEP student-athletes will walk across the graduation stage on Saturday and receive their diplomas from the university.

Graduating this weekend will be All-Americans Samantha Hall (track & field) and Will Hernandez (football).

Seventeen graduates hail from the United States, while two come from Jamaica, one from American Samoa, one from Australia, one from Kenya and one from Nigeria.

Touchet was a three-time recipient of a Conference USA Commissioner’s Academic Medal for achieving a GPA of 3.75 or higher.

Part of the team that won the first indoor and outdoor conference championship in school history … helped the Miners to three consecutive indoor conference titles … registered the eighth-best mark in program history in the hammer throw with 52.22m (171-04) … captain of the women’s team for two seasons … finished her college career with bests of 46.13m (151-4) in the discus, 17.66m (47-11.25) in the weight throw and 52.22m (171-04) in the hammer throw … earned a spot on the 2017 C-USA Commissioner’s Academic Honor Roll … Biological Sciences major.

The transfer from El Paso Community College played for the Orange and Blue during the 2017 campaign … defensive lineman saw action in the first four games before suffering a season-ending injury … notched four tackles and one quarterback hurry … member of the 2017 Conference USA Commissioner’s Academic Honor Roll …Biology major.

Member of the Miner football team for three seasons … saw action in eight games during the 2015 season … recorded a tackle on special teams versus UTSA …Criminal Justice major.

Played and started in 47 games for the Miners … tallied 247 tackles during his career … also totaled 15.5 tackles for loss, 11 pass breakups, eight quarterback hurries, three sacks, three interceptions and one fumble recovery … led all UTEP defensive backs in tackles during the 2016 and 2017 seasons … was named the 2016 Top Gun Player of the Year, awarded to the best special teams performer … as a true freshman, led the team in tackles with 76 … Multidisciplinary Studies major.

Played two seasons for the Miners after transferring from Fresno State … saw action in 17 games, making 11 starts at quarterback … threw for a total of 1,513 yards on 124-of-254 passing with nine touchdowns … during senior campaign, rushed for 114 yards and a pair of scores … threw for over 100 yards in eight contests … opened his UTEP career by throwing for three touchdowns on 15-of-27 passing, with 229 yards and no interceptions during a start and victory over rival NM State … Leadership Studies major.

Played in 22 games for the Miners … made six starts during her senior season … scored five runs … went 2-for-2 and scored a run during game one against Florida Atlantic … drew a walk and crossed the dish during UTEP’s victory over FAU … scored three runs and connected on three hits against the Owls on Senior Weekend … Multidisciplinary Studies major.

Part of the team that won the first indoor and outdoor conference championship in school history … helped the Miners to three consecutive indoor conference titles … competed at the NCAA Outdoor Championships in 2015 and 2017 … won the discus throw at the C-USA Outdoor Championships in 2015 and 2017 … set a school record in the discus throw in 2015 with a mark of 58.50m (191-11) … completed her college career with bests of 14.90m (48-10.5) in the shot put and 34.38m (112-9.5) in the javelin … earned All-C-USA First Team honors for the 2015 season … garnered second team All-American accolades during her final season … Economics major.

Member of the Miner football team for three seasons … saw action in 10 games on special teams in 2016 … played in the Miners’ last home game versus LA Tech in 2017 … listed on the 2016 C-USA Commissioner’s Academic Honor Roll …Multidisciplinary Studies major.

Competed in both cross country and track and field for UTEP … part of the team that won the 2014 Conference USA Indoor Championship … helped the Miners capture back-to-back conference cross country titles (2015, 2016) … garnered All- Conference USA third team honors in the 10,000m in 2014 … notched an All-C-USA second team honor in the 10,000m in 2015 … finished his career running a personal best 10,000m time of 31:09.16 … helped the Miners finish 11th in the nation at the 2015 NCAA Cross Country Championships … Biological Sciences major.

The former walk-on played in 36 games for the Miners … finished collegiate career ranked third on the program’s all-time list for career punts (206) and punt yards (8,910) … 79 punts in 2017 rank tied for fifth on the program’s single-season list, while his 3,483 yards rank fifth on the school’s single-season list … a two-time member of the Ray Guy Award Watch List … during senior season ranked second in Conference USA and fifth in the FBS in punt yards (3,483) … two-time member of the C-USA Commissioner’s Academic Honor Roll … International Business major.

Was a two-year football letterwinner, seeing action in 20 games … notched a total of

36 tackles, four quarterback hurries, one forced fumble, one tackle for loss and two

assisted sacks … during the 2016 season played in all 12 games, making six starts

during his final season, with an effort of 55.39 seconds … finished his career with

Played in 155 games, making 153 starts in three seasons with the Miners … became

record, while her nine assists at FIU in 2016 is a single-game standard … led the

Appeared in 111 singles and 103 doubles matches for the Miners, tallying 94 wins …

hometown Miners … a three-year starter who was used as a defender, midfielder

and forward, she recorded 13 goals and eight assists for 34 points in more than

4,500 minutes of playing time … saved her best for last with eight goals and four

assists for a 20-point senior season in 2016 … Multidisciplinary Studies major.

Has appeared in 69 games for the Miners, making five starts … has collected 224

Commissioner’s Academic Honor Roll … on a Presidential Scholarship at UTEP …

games, making five starts … played in all 12 games during the 2017 season, seeing

the field on offense and special teams … recorded his first career catch, a five-yard

snag during the first quarter against WKU … Creative Writing major.