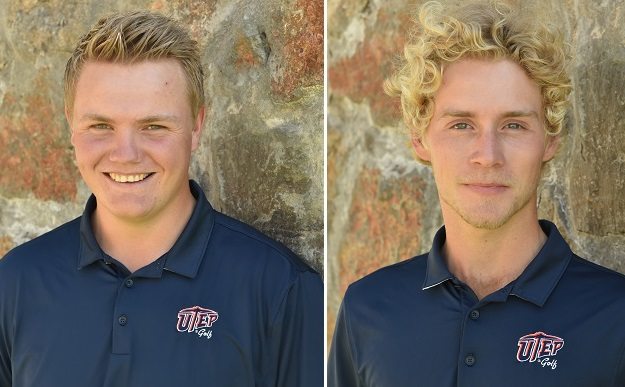 For their efforts during the fall 2016 campaign, two UTEP men’s golfers, Frederik Dreier and Andreas Sorensen, made the fall Arnold Palmer Cup Ranking.

Dreier, a Birkeroed, Denmark native, is ranked no. 13 among the Europeans and Sorensen, who hails from Ikast, Denmark, is in the 18th spot of the Europe rankings.

Started in 1997, the Arnold Palmer Cup is a Ryder Cup-style competition that puts the top collegiate men’s United States players against the top collegiate men’s European players in a match play format with team, mixed team and singles sessions. The rankings were first introduced in 2013 to select the first six golfers for each side, with the remaining four being selected by a committee and a coach for the Americans and two committee selections, a coach’s pick and the R&A Scholars Tournament champions for the European side.

“They’ve been our top two players for really the past two seasons,” head coach Scott Lieberwirth said. “Both of them had a very strong fall season for us. I’m very proud of them for being in the mix to be considered for a spot on that team, it’s probably the most elite college team you could earn your way on, very similar to what the Ryder Cup is to the professionals.”

The lone senior on the team, Dreier finished the top 10 in four of five tournaments this fall, including two runner up finishes at the Fighting Irish Classic and the Herb Wimberly Intercollegiate that earned him a C-USA Golfer of the Week honor (Oct. 19). His finish at the Fighting Irish Classic helped the team secure the title, slipping past host Notre Dame while tallying 16 birdies. The senior boats a 70.2 stroke average.

Sorensen, a sophomore, has finished in the top ten in three of the five tournaments he has participated in, including two runner-up finishes and a C-USA Golfer of the Week honor (Sept. 14). Sorensen played a huge role in helping the Miners claim its first Price’s “Give ‘Em Five” Invitational title on Oct. 30, finishing in second place with a score of 12-under-par 204 (66-70-68) while carding 14 birdies and one eagle in the final round. Sorenson has a 70.93 stroke average.

The Arnold Palmer Cup uses Golfstat’s NCAA Player Ranking as a base and awards points for wins and high finishes and a negative bonus for poor finishes. Strength of schedule is also factored in.

The 20th annual event will tee off June 9-11 at the Atlanta Athletic Club in Johns Creek, Georgia.

“It’s great for them,” Lieberwirth said. “They’re going to have to continue the good play and maybe improve on what they’ve done in the fall to be a serious contender for it, I know they’re both very capable of that.”