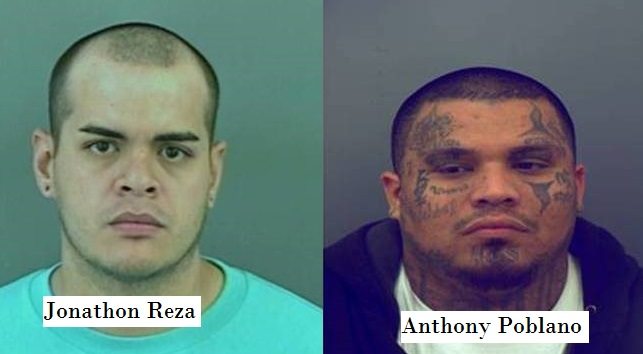 Officials with the El Paso County Sheriff’s Office announced late Friday the arrests of two of their most wanted subjects, in two separate incidents.

Both Anthony Poblano and Jonathon Reza were on the list for various offenses. Poblano was wanted for Burglary of a Building, Assault on a Family Member and Possession of a Controlled Substance, while Reza was sought for Burglary of Habitation and Driving while Intoxicated.

Poblano was taken into custody by members of the U.S. Marshals Lone Star Fugitive Task Force (LSFTF) which is made up of different law enforcement personnel, including members of the El Paso County Sheriff’s Office, El Paso Police Department, Texas Department of Public Safety, and other local agencies.

Poblano was taken into custody along the 11300 block of Long John. Poblano’s wife, Viviana Poblano, was also arrested for Hindering Apprehension after lying on the whereabouts of her husband.

Reza was arrested by El Paso County Sheriff’s Office deputies assigned to Warrants and Fugitive Apprehension Unit, after deputies received an anonymous tip on his whereabouts after seeing him featured on Crime Stoppers Most Wanted.