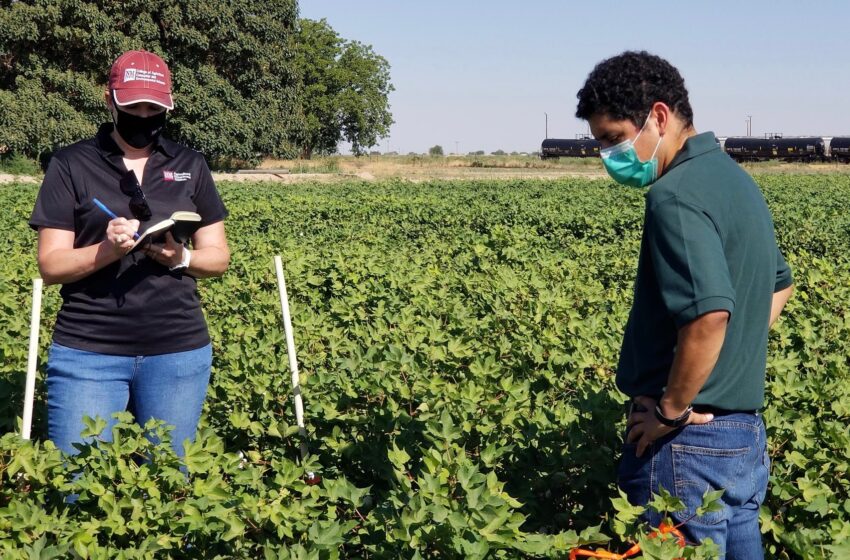 Two New Mexico State University (NMSU) graduate students in the College of Agricultural, Consumer and Environmental Sciences were among six finalists from around the world to win awards for their research presentations at the 2021 International Arid Lands Consortium Conference.

Paramveer Singh, a graduate student in the Department of Plant and Environmental Sciences, was given an honorable mention recognition for his lightning talk on sustaining the Ogallala Aquifer with circular buffer strips of native perennial grasses.

Tellez’ research, during which he has worked alongside Jane Pierce, Ph.D., and Patricia Monk in the Department of Entomology, Plant Pathology and Weed Science, is focused on okra-leaf cotton and crop microclimate impacts on insect pests. According to the research, microclimates within cotton canopies can vary due to factors including leaf shape and plant architecture. Changes in these microclimates can also impact insect populations, including the cotton bollworm, allowing them to thrive in desert environments.

Tellez, Pierce and Monk looked at an open canopy okra-leaf variety compared to a closed canopy variety of cotton with standard leaves. Bollworm eggs were placed on leaf surfaces, and after 48 hours the eggs were taken to a laboratory to hatch. Initial results found lower rates of egg hatch in the okra-leaf cotton, meaning okra-leaf cotton varieties could play an important role in pest management, especially in the arid Southwest United States.

“It’s a great example of yet another tool that may be employed by growers, taking advantage of the structure of the cotton plant to control insect pests,” Tellez said. “Farmers would be able to use this trait to reduce populations of pests and save on insecticide applications, which would be particularly useful as we see more resistance to Bt cotton.”

Omotayo’s research delves into harnessing the environmental and economic potentials of guar in arid regions.

Guar is a drought-tolerant annual crop that is used for feed and guar gum, and as a drilling mud additive. Omotayo examined the guar data generated by NMSU associate professor Sangamesh “Sangu” Angadi during a trial he carried out at the Ag Science Center in Clovis, New Mexico. Omotayo also examined the Break-even for New Crop Options, also known as BENCO, model developed by the Sustainable Bioeconomy for the Arid Regions project’s sustainability and performance team.

Omotayo used BENCO to compare two water treatments and find the potential for guar’s profitability. When compared to traditionally grown crops, guar most efficiently used water, whether it be from rainfall or irrigation.

But in order to maintain profitability, there needs to be growth in the market for guar, and more work needs to be done on the crop’s economics.

Omotayo, who performed his research alongside NMSU assistant professor Frannie Miller, said he is grateful to the College of ACES and the Sustainable Bioeconomy for the Arid Regions team for allowing him to carry out his research.

NMSU is a member institution of the International Arid Lands Consortium.