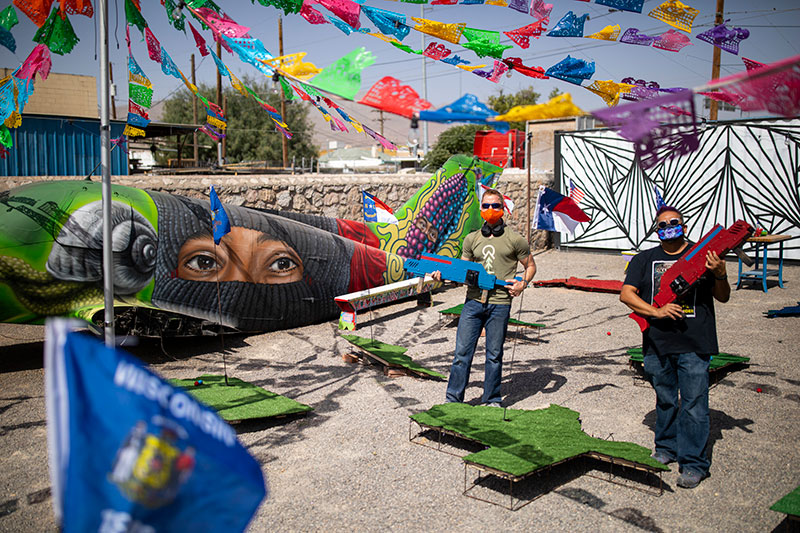 The worlds of art and engineering collide in an interdisciplinary collaboration between a pair of faculty members at The University of Texas at El Paso.

Nathaniel V. Robinson, assistant vice president for the Office of Research and Sponsored Projects and lecturer for civil engineering, and Angel Cabrales, assistant professor of sculpture, have combined their talents and expertise to generate dialogue about ethnicity, opportunity and social challenges while exploring the role of technology in the daily lives of Americans.

Robinson and Cabrales are collaborating on multiple projects involving interactive sculptures that engage the public as active participants in art and dialogue.

The first project is a new iteration of a previous installation by Cabrales and is intended to promote voting in the El Paso region. The interactive exhibit titled “A-Hole in One: The Battlegrounds,” was expected to be on display at Galeria Lincoln at 3915 Rosa Ave. in Central El Paso. However, due to the spike in active COVID-19 cases in the community, the gallery has voluntarily closed temporarily to help slow the spread of the virus. Should conditions improve in the city, the exhibit may be displayed for a few weeks after the election.

Participants would have been able to sit in armchairs and launch red, white or blue foam golf balls at sculptures of swing states, also known as battleground states. Various elements of the American political system are ingrained throughout the installation.

“Sitting in the armchair is what most of us do,” Robinson said. “We take in information at home, complain about things we don’t like, and talk, even to ourselves, about what needs to change. So, that’s why we have the participants sit in chairs – they are armchair warriors,” Robinson said. “Then, just like your vote, you get to launch that ball toward a swing state where the election may be decided.”

The exhibit also will feature an interactive robot on a podium that can recite voting statistics relative to the individual.

“Presidential elections tend to bring more people out to vote than other elections,” Cabrales said. “Latinos have traditionally had a lower turnout than other races. Back in 2018, the Latinx vote was higher than ever, but it is not enough, we can still do better. Our voice matters.”

The second project in the works for the interdisciplinary duo is an interactive sculpture titled “Delineation Bo(u)nded”, that uses ferrofluids – fluids with a strong magnetization in the presence of a magnetic field — to alter its shape. Words such as ‘hope’ and ‘justice’ will be integrated within the art piece.

A viewer will approach the sculpture and an embedded camera will capture the user’s face. The sculpture will alter itself based on the viewer as a metaphor for the different challenges people may face.

“The ferrofluids are actuated and the words ‘hope’ become thorny and more obscure. Thus, it is representing that ‘hope’ is available to everyone but sometimes it is more difficult to see or achieve for some groups than others,” Robinson said. “This also explores other themes like technology’s role in the implementation of policy and structural challenges in society.”

Cabrales’ works with Robinson were recently featured in the International Sculpture Center’s (ISC) first virtual studio tour. The two demonstrated portions of both projects and explored design concepts with the international virtual audience.

Additionally, Robinson and Cabrales are constructing these projects in UTEP’s Interdisciplinary Research Building (IRDB), and the building’s new makerspace was showcased in the ISC virtual tour. The space in the IDRB was provided to Engineering, Arts and Sciences for Social Impact (EASSI), a group dedicated to the integration and intersection of the arts, sciences and engineering for the purposes of social impact.

“It’s really great having a friend like Nate, who is interested in bringing his skillset into the arts, mixing our concepts, designs and voices. Art, especially sculpture, involves a lot of engineering along with conceptualization and meaning,” Cabrales said. “I believe this is why we work well together; we not only want to build work for exhibitions but create dialogue and thought within our community. We are linked through different paths but, much like EASSI and UTEP, the biggest link is the desire to make an impact and see others make positive impacts in our communities.”