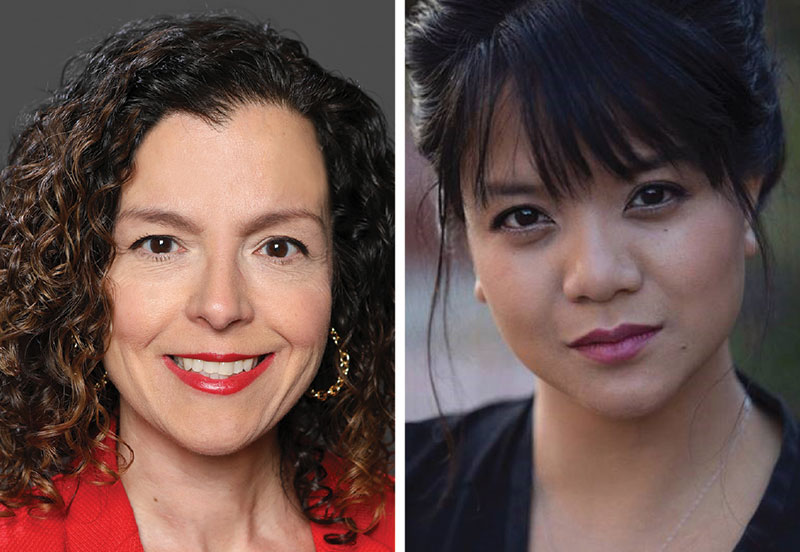 The Academy of American Poets (AAP) selected two professors from The University of Texas at El Paso’s Department of Creative Writing to be among the 2021 guest editors of the Poem-a-Day series that is sent daily to more than a half million subscribers worldwide. The faculty members are Rosa Alcalá, Ph.D., left, professor of creative writing, and Sasha Pimentel, associate professor of creative writing. | Photo courtesy UTEP

The Academy of American Poets (AAP) selected two professors from The University of Texas at El Paso’s Department of Creative Writing to be among the 2021 guest editors of the Poem-a-Day series that is sent daily to more than a half million subscribers worldwide.

“These are prestigious appointments made by the discipline’s foremost organization,” said Rosa Alcalá, Ph.D., professor of creative writing, who will curate poems for September. Her colleague, Sasha Pimentel, associate professor of creative writing, will be guest editor for March. Alcalá said that she and Pimentel, who already has started her poem selection process, were honored to be picked.

In its announcement, the academy described its guest editors as award-winning poets who represented a wide range of editorial perspectives around the country. The 3-year-old series – the nation’s largest platform for poets to share new work – is distributed via web, email and social media.

Daniel Chacon, professor and chair of UTEP’s creative writing department, called Poem-a-Day one of the scaffolds of modern poetry in the U.S., and widely influential in academia’s creative writing communities. He said the appointments of Alcalá and Pimentel are testaments to the department’s influence on contemporary poets and poetry in terms of what the two professors publish and in the work that they promote.

“When a poem appears on the academy’s webpage, it essentially becomes archived as the important poetry of today,” Chacon said.

Alcalá and Pimentel have authored several books of poetry. Alcalá, a native of New Jersey, has earned a National Endowment for the Arts (NEA) Translation Fellowship and was a runner-up for a PEN Translation Award. She is editor and co-translator of “New and Selected Poems of Cecilia Vicuña.”

Pimentel, born in the Philippines and raised in the United States and Saudi Arabia, has earned an NEA fellowship and has been a Picador Guest Professor for Literature at Universität Leipzig in Germany.

Jeffery Gleaves, AAP digital engagement and content director, said the organization admires Alcalá and Pimentel for their individual bodies of work, dedication to their craft, and faithfulness to their poetry communities.

Gleaves said that the academy asks guest editors to remember the Poem-a-Day readers as they make their poetry selections. Subscribers, who include scientists, high school students, retirees, celebrities and elected officials, have told the academy that they want to experience the wide range of emotions that make up the human experience.

“It might sound like a tall order to ask guest editors to curate a month’s worth of poetry for all people, but communicating across difference and divide is what good poetry is all about,” Gleaves said.

Alcalá said that each editor prepares in a different way and can take any number of approaches to their selections. Some may follow thematic lines while others may want to invite poets whose work deserves more attention.

“I have begun very simply, by making a list of poets I admire, eager to share their work with others,” said Alcalá, who earned her doctorate in English from the University of Buffalo in 2004. She added that she wants to include some translated poems. “All in all, the process can takes months, from the thinking to the asking to the selection, and as guest editor you do most of the work yourself, with support from the Academy of American Poets.”

Pimental, who called poetry “a distilled language,” submitted her selected poems to the AAP in mid-January. She said she spent months immersed in poetry for this project. Her goal was to widen the concept of “American” poetry to poetry of the Americas written by immigrants and emigrants to include a few works crafted by UTEP colleagues and former students.

“I curated with an eye toward transnational voices, voices both new and established, voices of many languages and many lands,” Pimentel said. “Against this cruel nationalism that centers monolingualism and whiteness, against heteromasculinity, against ways geographies are (limiting), and against the limits of identity that are meant to try to lasso us in.”

Gleaves said the AAP has full confidence in the 12 guest editors, to include Alcalá and Pimentel.

“The series is in marvelously able hands,” Gleaves said.