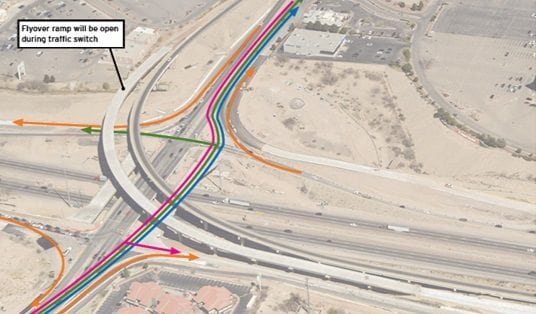 The overpass reconfiguration will switch traffic onto the eastern-most turnaround bridge, which we refer to as bridge 17.  As the illustration above shows, the traffic switch means a reduction of through-lanes to three: 1 southbound lane as shown by the pink line, and 2 northbound lanes as shown by the green and blue lines. This condition will be in place for at least five months.

Remember, the Sunland Park flyover ramp will be open before this traffic switch is implemented. Also keep in mind, GO 10 is aiming to be substantially complete with structures at the I-10/Sunland Park interchange by the end of this year.

If you’re wondering why this traffic switch is necessary:  GO 10’s design plans call for the demolition and reconstruction of the existing Sunland Park Drive overpass. Crews aren’t merely replacing the pavement of the overpass, they need to bring down the beams and rip out the columns.

The newly replaced overpass will have an increased clearance height and the support columns will be relocated to make way for the collector-distributor (CD) lanes, which will run alongside I-10’s main lanes. Click here to see a simulation video of the completed GO 10 corridor.