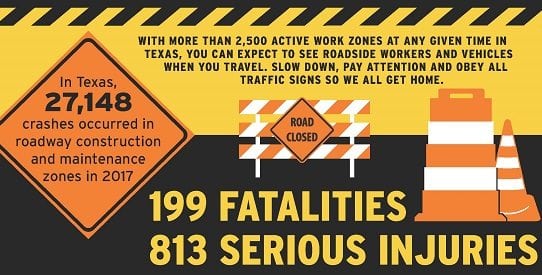 TxDOT is reminding drivers to take extra precautions in active work zones ahead of National Work Zone Awareness Week. The week, set for April 9 through the 13, brings awareness to work zone safety nationwide.

“Keep in mind, that in work zones, you have reduced ability to escape a bad situation. That’s usually because there’s concrete barrier most of the travel lane and sometimes lanes are reduced in width. There are many cars and trucks that move together very closely through a work zone,” said TxDOT District Engineer Bob Bielek.

He adds, “It is really important for people to control their speed, not tailgate and watch what is happening around them. If you get stopped for speeding in a work zone, and there are workers present, fines are doubled.”

In Texas, there are 2,500 active TxDOT work zones at any given time. Locally there are nearly a dozen from Anthony to East El Paso. Drivers should plan ahead.

“Take a look at our website to find out where we are going to have work zones in place and find another way to get to your destination. Avoid the work zone entirely if at all possible,” Bielek advised. “Keep in mind that work zones are temporary situations. They are there so we can provide you with a facility that meets all the geometric and safety standards and you’ll have a far more pleasant drive.”

TxDOT districts around the state conduct events in observance of National Work Zone Awareness Week. In the El Paso District, which covers Brewster, Culberson, El Paso, Hudspeth, Jeff Davis and Presidio counties, bilingual videos with safety messages will be distributed during the week and photos of field crews will be distributed daily all month on social media channels.