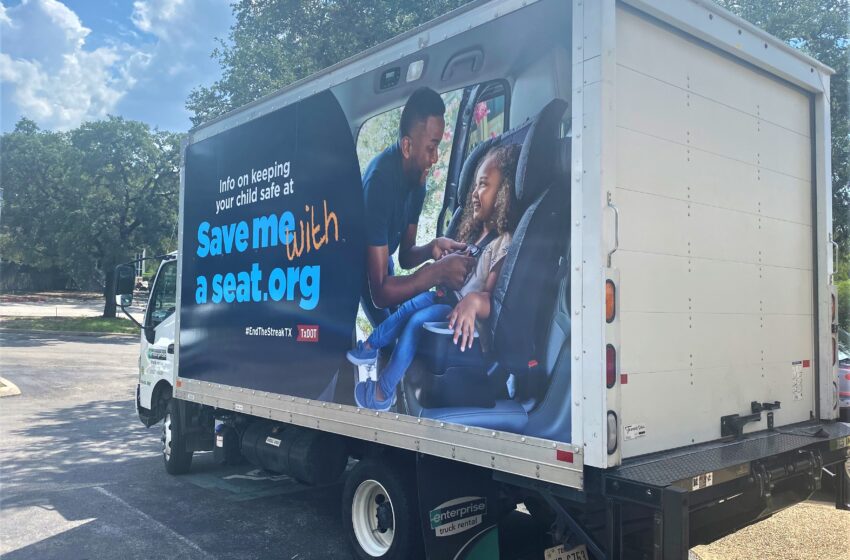 “When child car seats are installed correctly they keep children as safe as possible during a crash,” TxDOT Executive Director James Bass said. “We urge parents and caregivers to ensure they are securing their children properly in a vehicle and using the appropriate child car seat for their child’s age and size.”

AUSTIN – Texans may think they know how to correctly install and use their children’s car seats, but nearly 60 percent of the time they’re used incorrectly. That’s why TxDOT is helping drivers keep their children safe on the road.

TxDOT’s annual “Save Me With a Seat” campaign is hitting Texas airways and roadways as the nation recognizes National Child Passenger Safety week from September 20-26.

The campaign highlights the fact that an alarming number of car seats are being installed and used incorrectly.

This year’s “Save Me With a Seat” campaign features a branded truck that will traverse Texas, covering more than 3,000 miles and visiting six cities to bring the car seat safety message to communities across the state.

The El Paso stop is scheduled for Monday, September 21. Drivers may see the mobile billboard between 10 a.m. and 3 p.m. The truck will be a no-contact experience with the driver utilizing COVID-19 safety precautions including a mask and gloves. The awareness effort will be supported by radio ads, billboards, digital media and social media.

According to NHTSA, child car seats in passenger vehicles can reduce the risk of fatal injury in a crash by 71% for infants and by 54% for toddlers.

According to the National Highway Traffic Safety Administration (NHTSA), 59% of all child car seats are being misused. This is even more alarming given that vehicle crashes are a leading cause of death among children in the nation.

“When child car seats are installed correctly they keep children as safe as possible during a crash,” TxDOT Executive Director James Bass said. “We urge parents and caregivers to ensure they are securing their children properly in a vehicle and using the appropriate child car seat for their child’s age and size.”

TxDOT is continuing its free safety seat inspections throughout the year, but this year they’ve gone virtual. Starting this month, we will be rolling out virtual car seat checks to enable us to maintain the same level of service and provide education to families while following social distancing guidelines due to COVID-19.

For a one-on-one TxDOT virtual car seat check, families can visit SaveMeWithaSeat.org and enter their zip code to email the nearest TxDOT Traffic Safety Specialist to set up an appointment. Families will need a mobile electronic device with video and audio capabilities, like a cellphone, laptop or tablet.

Parents and caregivers can also learn if a child should be in a rear-facing car seat, a forward-facing car seat or a booster seat, and get other car seat safety tips by visiting the website.

TxDOT reminds drivers that Texas law requires all children under 8 — unless they are taller than 4 feet, 9 inches — to be in a car seat whenever they ride in a passenger vehicle. Failure to properly restrain a child can result in a ticket of up to $250. Children under age 13 should ride in the back seat, properly secured in a seat belt or safety seat.

Officials say “Save Me With a Seat” is a key component of #EndTheStreakTX, a broader social media and word-of-mouth effort that encourages drivers to make safer choices while behind the wheel, like wearing a seat belt, driving the speed limit, never texting and driving and never driving under the influence of alcohol or other drugs. Nov. 7, 2000 was the last deathless day on Texas roadways. #EndTheStreakTX asks all Texans to commit to driving safely to help end the streak of daily deaths.

Tags: Save Me With a Seat