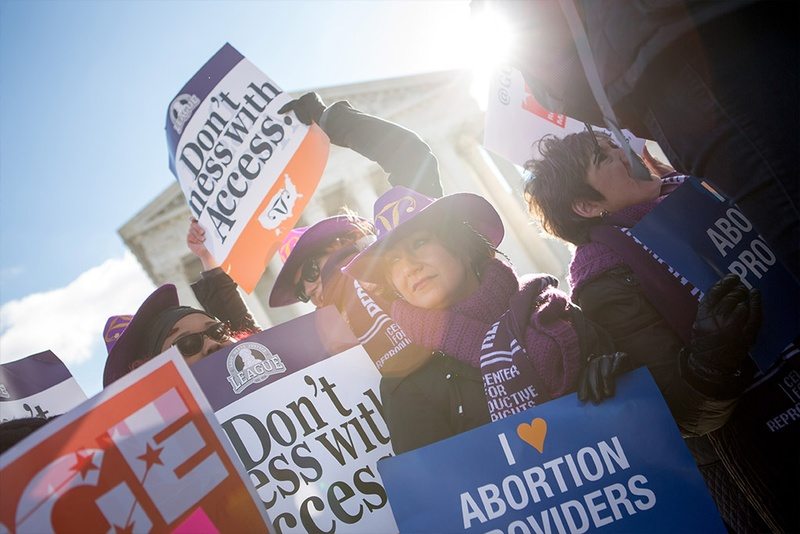 On a 5-3 vote, the high court overturned restrictions passed as part of House Bill 2 in 2013 that required all Texas facilities that perform abortions to meet hospital-like standards — which include minimum sizes for rooms and doorways, pipelines for anesthesia and other infrastructure.

The court also struck down a separate provision, which had already gone into effect, that requires doctors to have admitting privileges at a hospital within 30 miles of an abortion clinic.

This means Texas’ 19 remaining clinics — of the more than 40 that were open before HB 2 passed — will continue to provide abortions. Had the court upheld the hospital-like standard requirement, Texas would have been left Texas with as few as 10 abortion clinics — all in major metropolitan areas.

In a majority opinion authored by Justice Stephen Breyer, the court indicated that the facility requirement on abortion clinics does not “benefit patients and is not necessary.” In knocking down the admitting privileges requirement, the court said “sufficient evidence” existed to prove that requirement “led to the closure of half of Texas’ clinics, or thereabouts.”

“We have found nothing in Texas’ record evidence that shows that, compared to prior law (which required a “working arrangement” with a doctor with admitting privileges), the new law advanced Texas’ legitimate interest in protecting women’s health,” Breyer wrote.

Texas Attorney General Ken Paxton in a statement called the ruling “disappointing” and insisted the decision was passed “to improve patient safety and raise the standard of care for women at abortion facilities.”

“HB 2 was an effort to improve minimum safety standards and ensure capable care for Texas women,” Paxton said. “It’s exceedingly unfortunate that the court has taken the ability to protect women’s health out of the hands of Texas citizens and their duly-elected representatives.”

Texas abortion providers and representatives with the Center for Reproductive Rights, which brought the lawsuit on their behalf, hailed the decision as a vindication.

“Every day Whole Woman’s Health treats our patients with compassion, respect and dignity—and today the Supreme Court did the same,” said Amy Hagstrom Miller, founder and CEO of Whole Woman’s Health and the lead plaintiff in the case. “We’re thrilled that today justice was served and our clinics stay open.”

The high court’s decision was a massive win for the reproductive rights community in and out of Texas. The court’s decision is expected to help overturn similar requirements in other states fighting similar legal challenges.