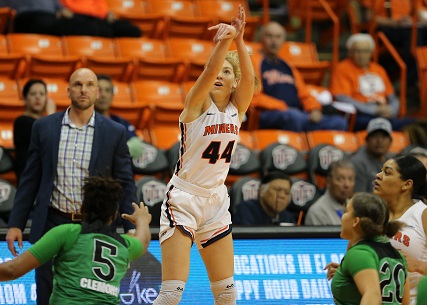 BIRMINGHAM, Ala. – Katarina Zec hit double figures in scoring for the ninth straight game with a team-high 14 points and Zuzanna Puc added 11 points but the UTEP women’s basketball team was derailed at UAB, 68-45, Saturday afternoon.

“I’m impressed with our team today because after giving up 29 points in the first quarter when UAB was just playing unconscious basketball and wouldn’t miss, we settled in and played some really good basketball,” UTEP head coach Kevin Baker said. “I was so impressed with how we guarded the rest of the way. This team is a team of character. Most teams would lay down after going through that first quarter, but they keep fighting.”

UTEP had an advantage in rebounding (37-33), committed just 13 turnovers and won the bench scoring category (9-8) despite dressing just seven players for the ninth consecutive contest. However, an off shooting day (16-49, 32.7 percent) and UAB coming out of the gates locked in offensively proved too much to overcome.

The Blazers shot 73.9 percent (11-15) from the floor during the impactful first quarter. UTEP held UAB to 34.1 percent (14-41) the remainder of the contest, but it wasn’t enough to turn the tides completely. Another factor was the Blazers’ barrage of 3-pointesr (14-36), five of which came in that opening frame.

Puc flirted with a double-double with a game-high eight rebounds. Ariona Gill provided a spark off the bench with six points and five boards in 20 minutes of action. Jordan Alexander chipped in five points, six rebounds.

Rachael Childress set the tone for UAB, scoring 10 of her eventual game-high 29 points in the opening frame. She did most of her damage from distance, nailing 8-16 from beyond-the-arc. She was joined in double digits for scoring by Deanna Kuzmanic (12 points) and Katelynn Thomas (10 points).

UAB came out ready to play on its “Senior Day”, scoring the first 12 points of the game to help propel it to an 18-2 advantage just four minutes into the contest. UTEP regrouped, getting back-to-back lay-ups from Gill and Jade Rochelle to prompt a UAB timeout with the margin at 13 (20-7) with 3:56 to play in the frame. UAB kicked it back into high gear at the end of the quarter, closing the frame on a 9-2 run to put the Orange and Blue down by 19 (29-10) after 10 minutes of action.

The Blazers scored the first seven points of the third quarter and eventually led by 28 (52-24) with 5:18 remaining in the frame. UTEP didn’t quit, however, as it pitched a shutout the rest of the quarter. It also registered six points at the other end to trim the margin back down to 22 (52-30) heading to the final frame.

UTEP will wrap up the regular season with its “Senior Night” game against North Texas at 7 p.m. MT Thursday. The contest will be available on ESPN+ with Colin Deaver and Izabela McCage on the call. It will also be broadcast locally on 600 El Paso with Steve Kaplowitz and Traci Miller describing the action. Tickets are $3 for youth and $5 for adults and may be purchased by calling (915) 747-5234.