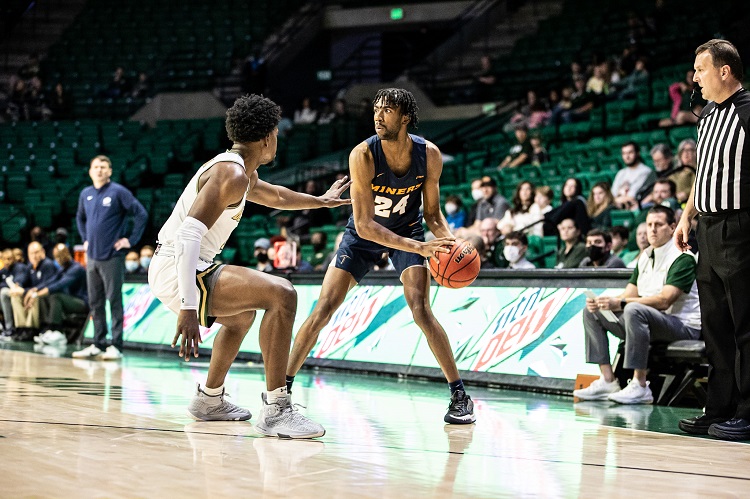 BIRMINGHAM, Al. – Souley Boum tallied 20 points (17 in second half), Jorell Saterfield came off the bench to score a career-high 15 points and Jamal Bieniemy notched eight points and a season-high eight assists, but UTEP (7-6, 0-1 C-USA) was dispatched at league preseason favorite UAB (11-3, 1-0 C-USA), 75-62, in the Conference USA opener for both squads Thursday evening.

It marked Boum’s fifth 20+ point effort on the season and 22nd straight in double figures. Tydus Verhoeven buoyed the efforts of the guards with six points and seven boards off the bench.

The Miners led 10-8 early six minutes into the game before UAB uncorked a game-altering 21-2 surge over the next seven minutes to vault ahead by 17 (29-12) with 7:33 to play in the frame. To make matters worse, head coach Joe Golding was ejected during the stretch after he was assessed a pair of technical fouls. The margin moved to 20 soon thereafter. UTEP continued to play hard after the surge, but could get no closer than 12 the rest of the way.

The Blazers were paced by Michael Ertel’s game-high 25 points.

“They are just explosive at all five spots and I think they (UAB) are an NCAA Tournament team,” UTEP associate head coach Jeremy Cox said “We guarded and were there a few times, but they hit some tough and contested shots. These things can get out of hand in a hurry and to keep it respectful throughout says a lot (about our guys).”

UAB scored the first five points of the contest, prompting Golding to call timeout 92 seconds in. The Miners responded, peeling off eight straight points to vault out by three (8-5) with 14:34 left in the frame. Jamari Sibley started it with a mid-range jumper, which was followed by triples courtesy of Bieniemy and Boum, respectively.

The Miners led by two a couple minutes later before the big surge propelled UAB out to suddenly be up by 17. IT was a 20-point differential (40-20) with just under three minutes to play before UTEP went on an 8-2 run to close the cap to 14 (42-28) heading into halftime.

UAB pushed the margin back to 18 (55-37) with 13:05 remaining in regulation but the Miners refused to quit. UTEP peeled off six straight points to force a timeout by UAB, with the deficit down to 12 (55-43). That is as close the Miners would get, though, as the home side went out by 22 before the Orange and Blue utilized a 9-0 run to close the contest out.

UTEP was slated to play at Middle Tennessee on Saturday (Jan. 1), but the game was postponed due to positive COVID-19 tests within the Blue Raiders’ program. The Miners will now be idle until playing host to LA Tech in their C-USA home opener at 8 p.m. MT on Jan. 6. For tickets, fans may call the Eisenberg Family Ticket Office at (915) 747-UTEP, email tickets@utep.edu, or  go online or in person (Brumbelow Building on UTEP campus, 201 Glory Road)

Jon Teicher (41st year) and Steve Yellen (19th year) will be on the call, which can be followed on “The Home Of UTEP Basketball” 600 ESPN El Paso and the UTEP Miners App. It will also be broadcast nationally on CBS Sports Network.